Jonathan Schofield appreciates most things... but not the Knickerbocker Glory

The name of this gin distillery, bar and restaurant is supposed to promote ambiguity. Three Little Words. I love you, gin and tonic, let's get drunk, ceaseless endless rain and so on. It's a nice marketing idea, creating the need to ask the question and therefore remember the answer. It's fun for playing games with tardy dining partners too such as: You are late. Thirty bloody minutes. Punishment is necessary. You must pay.

I can't really beat my colleague's description in a previous article of the handsome space so I won't try. She accurately summed the place up as: 'Six previously underused Grade-II* listed brick arches have been lovingly transformed into their Spirit of Manchester Distillery, new head office, packing and distribution unit, as well as a stunning new 70-cover restaurant and a beautiful cocktail bar. There’s even a room where guests can learn more about the gin making process and create their own bottle to take home from a personal copper still.'

The location is Watson Street, but not the northern end with its Casino 235, the Great Northern Square bars, Impossible club and one of those generic, world-over, Irish bars that literally make me fall asleep on my feet as I pass.

No, Three Little Words brings life to the Beetham Tower end of the street and sits right under Manchester Central. A fellow guide used to deadpan that Watson Street was where Manchester's first listings magazine was published. I still can't shake that joke.

I’m reviewing the restaurant so don't expect a gin review, someone more qualified can do that. I did have a G&T sharpener but I eschewed the billion 'botanicals' on offer. It was fine, then I kicked into a bottle of Rioja Reserva (£37) and then another, which is more my thing.

The menu is fairly tight, with enough across the card to pique your interest. You can grab something all day with breakfast and brunch, then lunch and dinner. There's small plates, large plates and probably some middle-sized ones - although the menu doesn't specify those.

I bloody loved the moist, oily, energy of the 'small plate' heritage tomatoes (£6.50) crowned by anchovies, capers and olives. Anchovies are one of my favourite foods in all their forms and were just perfect with the tomatoes. The dish would have only been half as good without them. The simple matching of ingredients here was a joy and makes me want to get a carry out for lunch. I felt ten times healthier after eating them.

The seared beef (£8) with its eastern accompaniments of soy, sesame, and coriander was another 'small plate' triumph. The medium rare beef was exquisitely timed and given a real lift with the coriander. I feel the same about the latter herb as I do about anchovies. Both are foods to make you happy.

The 'large plate' of sole with samphire (£15) was delicious, well-timed with a fragrant and generous lemon butter. The capers and the samphire added snap and bite to the textures and flavour. The delicate flesh came off the bone as graciously as Audrey Hepburn walking down stairs. The only thing I'd say here is the fries with parsley aioli should have come as part of the package and not cost another £4.

The 'small plate' chicken bhajis (£7), despite the yoghurt, were very dry. The fact there wasn't enough yoghurt is neither here nor there, the bhajis were intrinsically dry. Something needs to be added to the ingredients to loosen them up. On previous visits a couple of other similar dishes such as the lamb's fry had suffered similarly. Indeed the fries were dry too. The fried dishes need extra care at Three Little Words.

That aside, the bhajis were still not downright bad, but one dish I simply could never admire was the Knickerbocker Glory (£7). This was delivered to my table as I was in mid-flow of conversation and I didn't even notice. In fact I nearly picked it up to drink it.

Forget any notion of a gloriously fruity, ice-creamy concoction in a comedy glass, half a foot high, with an equally comedy long spoon. No, I received a miserable little thing in a small glass. This wasn't deconstruction of a traditional favourite, it was destruction. What's the point of the thing? It simply isn't a Knickerbocker Glory.

Weirdly on a subsequent visit, I had a Manchester Tart which was just how mother would have made it. This was exactly as described so why the messing about with the KG?

The service was very good, friendly, attentive and efficient. Thankfully we weren't asked 17 times whether the food was good. The soft red of the brick walls provided a comforting dining space. The music wasn't too loud to exclude conversation, something I hate as much as like anchovies. It was all a very easy eating out experience in a very impressive space with generally thoroughly decent cooking. I've been recommending Three Little Words to friends and colleagues as a fine new addition. Worth a visit. Handsome brick restaurant. Seek it out. Etc...etc...etc... 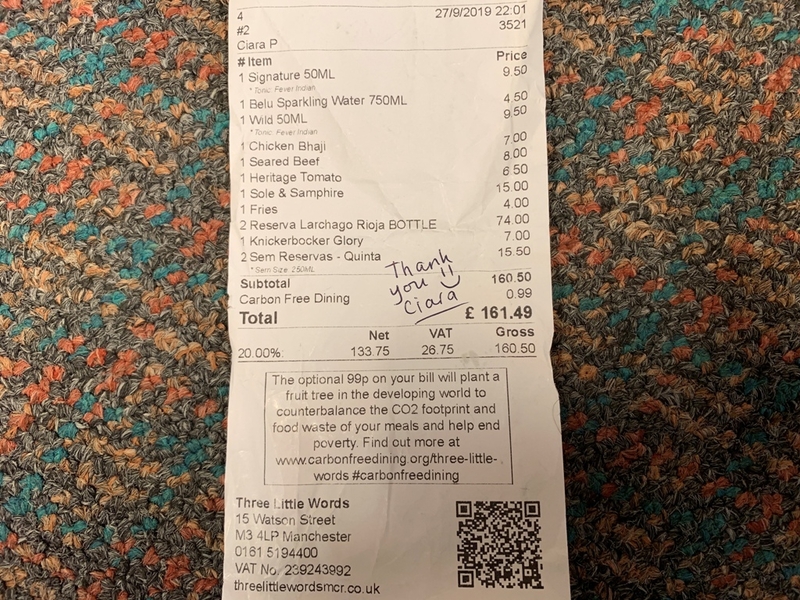