Right now we all need a little bit of good cheer.

For some, that means remaining upbeat with positive messages, colourful surroundings and a jolly outlook.

For others, it means hard liquor.

When your bladder can’t handle any more soju, your mind can fill up on good vibes

But what if I told you there was a place you could indulge in both? The Thirsty Korean in Chorlton has managed to combine a relentless Positive Mental Attitude with a nice line in fiery Korean food and some fermented goodies to wash it all down with.

The name is, perhaps, a nod to the fact that Koreans are among the biggest consumers of alcohol in the world. According to some, they down almost twice as much per head than the famously hard-drinking Russians.

Perhaps that’s because the Koreans have invented soju, the most easy-sippin’, smooth-tastin' drink I’ve ever encountered. It trickles down like a weak lemon Robinson’s Barley Water after a particularly hard tennis match but can pack a hefty alcoholic punch of anywhere between 10-50% ABV. In fact, like the Russians with vodka, Koreans are very creative about the base starch for soju, with potatoes, tapioca and rice all possible.

So when I visited the Thirsty Korean the first thing I tried was the grapefruit-flavoured Chamisul Soju (£11.40), which at 13% ABV is basically water to any truly thirsty Korean, but quite ample for me. My friend had a pint of Camden Hells (£4.90), which is totally un-Korean but its clean, crisp taste is perfect for pairing with the spicy, substantial grub The Thirsty Korean specialises in.

The beers change regularly but Korean Hite is always a standard. Current favourites include Kloud and the Seven Brothers range.

In fact, there is genre of cuisine in Korea known as "anju", which is any food made to drink with. Imagine that, a cold beer beading with moisture on a hot sticky night, nibbling on spicy rice cakes, chicken wings or slurping down noodles as you watch the world go by. While the fantasy might play out on the streets of Seoul, it’s not too bad on a warm summer’s evening in Chorlton either.

To get the full effect we tried something from each category of the menu. First up was haemul pajeon (£11.90), a savoury seafood pancake with squid, prawns, spring onions and a soy and chilli dip, which will be familiar in style to fans of okonomiyaki. It was maybe a bit unfortunate that I was sitting opposite an Old Boy film poster, which brought to mind the infamous scene where the protagonist eats a whole live octopus, but it slipped down a treat (unlike that poor cephalopod).

I loved the jeyukdeupbab (£12.80), a fried pork and onion dish. The thinly sliced pork is gorgeously fatty and crisp, coated in gochujang, a warm spicy sauce made using red pepper powder, with plenty of gingery kick, and then mixed with spring onions and sesame seeds. It’s ideal for drinking with but I’m going to step out on a limb and say it would also make a good hangover cure, should you need it.

It sits nicely next to the kimchi fried rice (£10.30), which has a good belly-coating effect but disappointingly seemed to be missing a fried egg (as promised on the menu), which must have an impact on its hangover-reducing potential. We also had some regular kimchi (£2) on the side, adding a little of that distinctive Korean crunchy-sour-fermented tang to each dish.

Of course, when drinking beer it is almost rude not to indulge in some fried chicken. Koreans have taken this pairing so much to heart that it has a special name (chimaek) and there are thousands of chicken and beer joints scattered throughout the Republic. At first taste the huraideu chicken (£11.80 for a combination of wings and drumsticks) seemed almost too plain, after so many crunchy coating, buttermilk American-style options available elsewhere. The secret is to order one of the homemade dipping sauces - either sweet-spicy chilli or soy garlic (£2).

This was quite a hefty spread - we had definitely over-ordered. I believe the menu is still a bit pared down to cope with reopening so perhaps this is a redundant request but I'd really like to see a few more snacky treats on the menu. I can't quite believe I'm typing this but Korean tapas anyone? The original intention - small bites with booze - would fit the bill perfectly here.

It's important to remember that The Thirsty Korean is walking a fine line between bar and restaurant. The dishes are more substantial and well crafted than you might expect from a bar that happens to serve a bit of food, but drinking really is at the heart of the place. It's a well-selected menu but hardly comprehensive - you won't find the entire encyclopaedia of Korean food here and nor should you expect to.

Food and alcohol covered, the other side of the hedonic equation is embodied by Eun Ji (EJ to regulars), the owner and chef who is also often seen front of house. Her inexorable, steely joy must have powered her through the various lockdowns and restrictions, as the Thirsty Korean had been open only a smidge over six months when the pandemic hit.

Her sunshiney approach is certainly apparent in the interior. With rainbow fixtures on the terrace, pink walls inside, film posters and fairy lights, the decoration of the bar could have ended up looking like a teenage girl’s bedroom, but somehow manages to stay quirky and cheerful without being soppy.

Regulars know it though for the Instagram-style positive messages that EJ writes and leaves in the bathroom, so when your bladder can’t handle any more soju, your mind can fill up on good vibes. 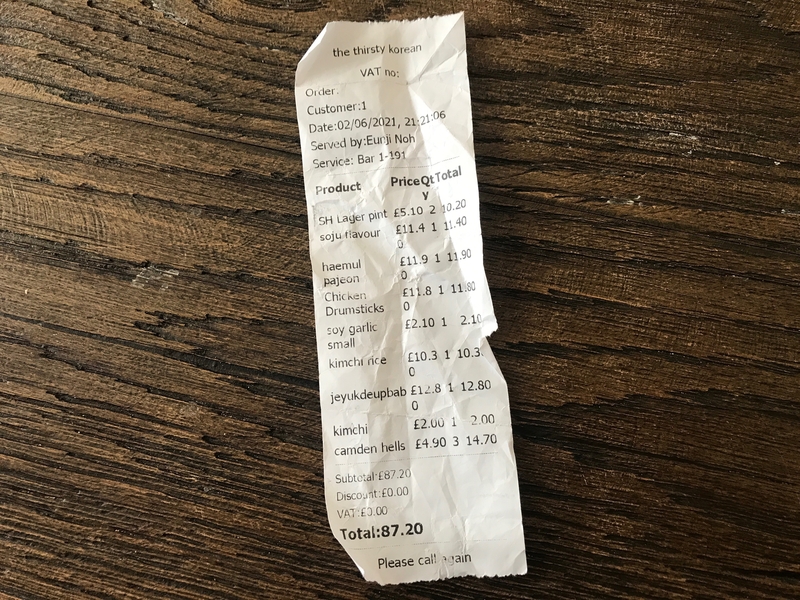 The best pizza in Manchester? We put it to a public vote
What you say
Previous Article Next Article
Read Next
● / Italian