Many years ago, in my twenties, I was in Mallorca on holiday. My dad and his best pal, Dave Whelan, always holidayed at the same time, both of them owning property that were next door to each other in a place called Cala Viñas.

Dave was famous for breaking a leg in the 1960 FA Cup final, playing for Blackburn at the time. They lost 3:0 to Wolverhampton Wanderers. Dave went on to do extraordinarily well in business, buying Wigan Athletic FC, a third division club, in 1995; he took the club to the Premiership in 2005 and - 53 years after breaking that leg - lifted the FA Cup after Wigan dramatically beat Manchester City 1:0 in the 91st minute in the 2012-13 final.

"What’s all this got to do with pie and mash?" you may well ask. Dave had bought a couple of pie shops in Wigan, called Poole’s Pies. They were extraordinary. Legendary in Lancashire.

Dave and my dad Roy were sat in the local bar on the third week of a holiday moaning about needing some ‘proper food.’ Roy had been winding Dave up about buying the pie shops.

"I bet you’d like a couple of Poole's Pies now Roy, eh"' said Dave with a glint in his eye. I was sat there thinking, I bloody do. The next morning I bumped into Dave in the market in Palma.

"Tell your lot that lunch is on me today Mark, 2pm at José’s." This was a café that Dave had bought in the compound, mainly because he and Roy wanted to ensure a steady supply of ‘proper food’ and a good breakfast.

Sitting down, we weren’t given a menu. What arrived were pies. Hot, crunchy, brilliantly seasoned, fantastic gravy, succulent steak and cheeky kidney pies. And chicken pies. And cheese and onion.

Roy was speechless. I was made up. Dave had ten dozen flown in on his private jet that morning from one of the shops in Wigan.

I will never forget how great that lunch was. I also figured the pies to be costing £100 each in aviation fuel.

Back to rather less expensive pies. I’ve always liked Pieminister; from a Bristol team who, since 2003, have been quietly expanding their pie shop empire. They run shops, sell direct and have stalls in trendy places like Borough Market in London. The shop on Church Street in the Northern Quarter in Manchester has been quietly getting on with it since 2003.

A bit too far from the Confidentials' offices to nip out to, unfortunately. But my day was made on reopening our new offices - post COVID-lockdown - just off Deansgate. Because, just over the road, the boys have opened another. Get in, as they say in Middleton.

I couldn’t wait to try it - a small, cosy place; all dark wood and smiles from the charming staff.

Mainly, though, it's all about pies.

Suffering a monster hangover on the day after my first drinking session in nearly five months meant pie and mash. The nine-quid menu that offers any pie and two sides winked at me...steak and kidney pie, mash, minty mushy peas and extra gravy.

The mash was great. Better than chips and a good contrast to the lovely, near-home-made crisp pastry of the pie whose filling of steak and kidney was well seasoned and top notch. Moist and comforting. The peas weren't quite mushy enough for me but the flavour was a hit, sharp and minty. The extra jug of pouring gravy topped it all off.

You can choose some good beers and the gluten-free Peroni on the menu shows the respect that the brand gives to gluten-free, vegan and vegetarian punters. Glass bottled Coke and Diet Coke shows class. There is something for everyone here. I know it’s the middle of the summer, but there aren’t many days when a great pie isn’t welcome.

Excellent addition to Deansgate this - and it’s less than a hundred quid. 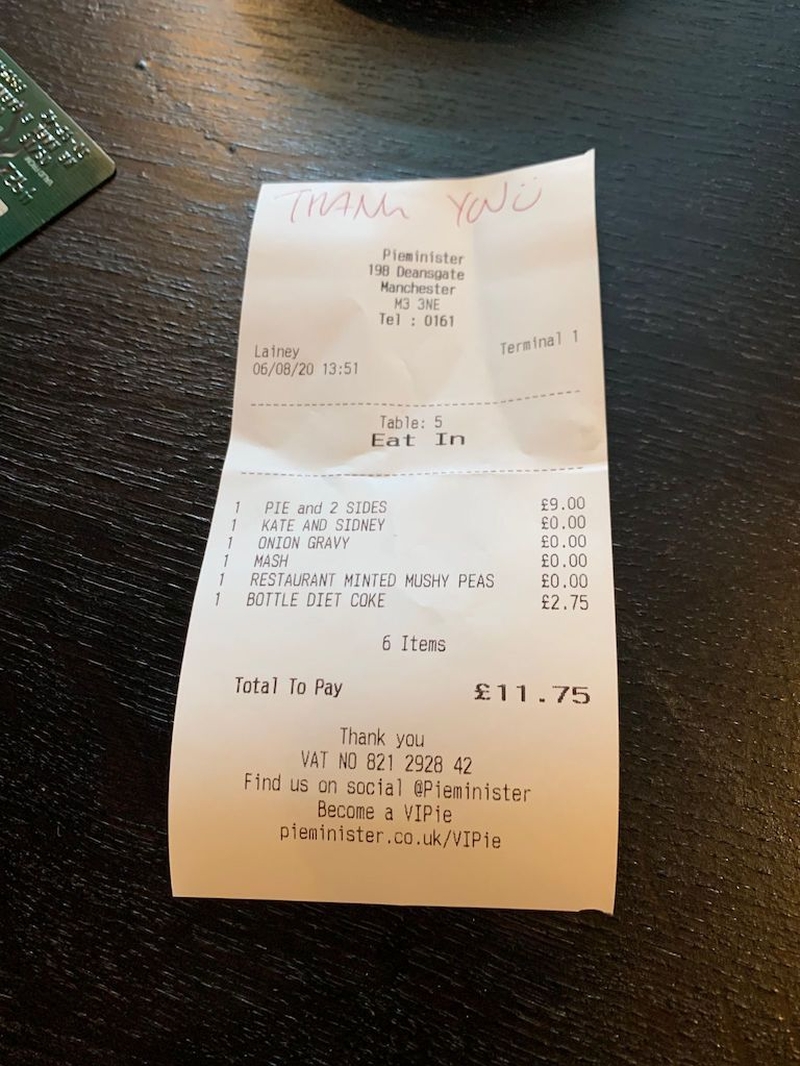