‘Bang on target’ - The River Restaurant at The Lowry Hotel, reviewed

The Lowry is the only five star hotel in Manchester and it’s not actually in Manchester. It’s on the better side of the river in Gordo’s hometown of Salford. Which delights Gordo as he and his fellow Salfordians do consider themselves a touch above the rest of Mancunia.

It was opened some 20 years ago by Sir Rocco Forte, the five-foot-four Titan of the hotel world. Forte and his family sold the place about five years ago and the hotel started to wilt like a bunch of under-watered white roses.

A fresh fig, cut in half and draped with a caramel glaze which I have never seen before and was delightful

A couple of years ago, a new owner arrived in the form of the well-heeled Millennium Hotel Group. They encouraged Adrian Ellis, the General Manager, to figure out how he could restore The River Restaurant to its former glory when the rather splendid young chef, chosen personally by Sir Rocco, Eyck Zimmer, was in residence.

Adrian found chef Andrew Green and dragged him in to take on the project. Green left after a few years, seduced by a brand new hotel restaurant kitchen at Mamucium. He was replaced by chef Dave Ashton over a year ago, who worked during a makeover of the bar and restaurant running into the millions. The restaurant has recently reopened and chef Dave can finally focus on showing us what he can do.

The menu is modern British, thankfully without that overworked ‘twist’. Gordo needs to come clean here; he has been shown a few dishes over the past three months or so in development. The kitchen team have been working on the new menu for some time.

Nowhere is this more evident than Dave’s Wellingtons. And I’m not talking boots. Over the past 12 months it’s become a favourite on the menu, and the team have been trying out other variations. Venison, chicken and pork Wellingtons have been tried out and all are being featured on Wednesdays (Wellington Wednesdays, geddit?) The chicken one is absolutely bloody terrific.

Gordo arrived unannounced on a grim Monday evening for the test meal. The look and feel of the restaurant cheers you up. It’s comfortable, well-lit and burnt orange.

Let’s start with the bread and butter. I don’t know about you, but I’m getting irritated with chefs messing about with butter. A great butter is great. Good bread is good. And they go together well. Whipped flavoured butter? Not many get it right for sure.

Chef Ashton’s take is an unusual one. You get four try-outs. The basic butter pat is bloody good, whilst the bread is better than good. Then you look at two cherry tomatoes which turn out to be whipped tomato butter. Evil? No, as it happens its clever and works. Basic rapeseed oil is in a bowl, Manchester’s riposte to olive oil. I’m beginning to like that. Then, in another bowl, is a warm dollop of melted Lancashire cheese, that you spoon onto the bread. Dear the Lord, this is genius. It’s genius because it tastes of Lancashire cheese. Warm, melty whipped up Lancy cheese. It’s a comforting thing on a shit damp and dark grey day in early November. That lot was £4.50 by the way.

One day I’ll walk in and order two thick slabs of the excellent white bread, toasted and liberally buttered, with that whipped Lancashire cheese stuff slathered all over them and finished off under the grill so they go brown and crispy on top. Bottle of Worcester sauce and a green leaf salad on the side please Dave.

Terrine of chicken, shitake mushroom, foie gras and caramelised fig (£10) had one half of the terrine as very slow ‘just cooked’ chicken breast in a jellied stock intensifying flavour along with the mushrooms, whilst the other side was a beautifully prepared slab of foie gras; rich, melting, lush. Alongside this was a small pickled onion, dotted with chives, a cube of fig jelly with a background of caramel and finally, a fresh fig, cut in half and draped with a caramel glaze which I have never seen before and was delightful. Bit like the topping on a créme brulée. The whole dish was served at room temperature which helped everything melt together.

A stuffed fillet of Dover sole, poached, with a prawn and ginger mousse and dashi cream (£32) didn’t work as well. The stuffing was bland and under seasoned, the dashi cream was unhelpful. The fillet itself was great.

Frankie Bird’s (yes, there’s a bloke called Frankie Bird who raises chickens) chicken breast, (£20) eaten at another lunch is bang on target. Mind you, it’s nothing like you would imagine. For one thing, it’s got a truffled tortellini on the plate, helping mop up Parmesan purée on which are scattered glazed chicken oysters and crispy well-seasoned skin. It tastes of proper chicken. I kid you not.

Triple cooked chips (£4) need more work to get them a bit crunchier. Have look at Heston’s is my advice. They are however, amongst the best in the city. Stem broccoli with miso butter and cashews (£4) is excellent.

Pistachio soufflé with a dark chocolate sauce (£9) was worth the 20-minute wait. The last four that have arrived at various restaurants across Europe over the summer have had Gordo’s companion at the time complaining. She would have approved of this one.

A glass of Sauvignon Blanc from Marlborough, New Zealand, called Vidal (£10.75) was fun, pink grapefruit moving into a touch of unripe peach. It served the meal well. With the pudding, a glass of the house champagne, Ayala Brut Majeur, (£15) was a touch of class, lots of McVities biscuit and arguably the only non-fortified wine to get along with chocolate.

Service, you have probably guessed is outstanding, led by Jason James.

The River Restaurant at The Lowry Hotel is back. It’s an occasion restaurant again. A Gordo Go.

Go on, treat yourself to a glass of champagne on me. 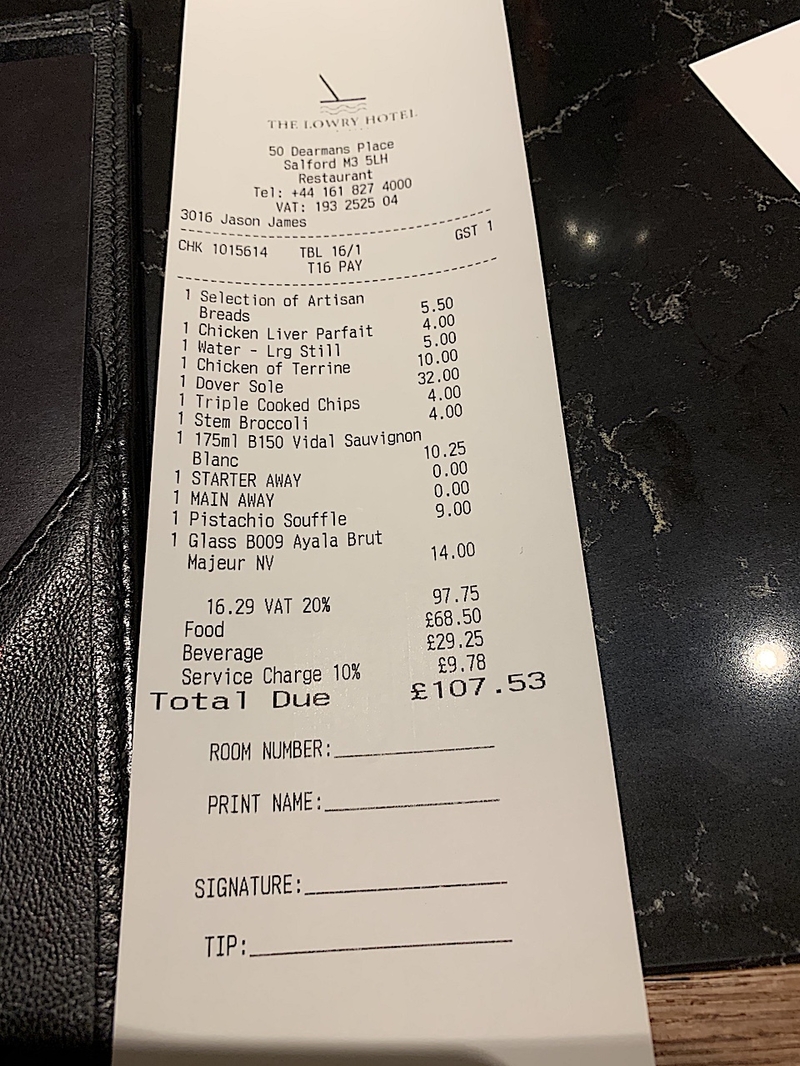