‘The best fish you’ve had for miles’ - The Easy Fish Company, Wilmslow, reviewed

Gordo likes it when lobsters don't let him down.

“Excellent, friendly service and cooking that doesn’t distract you from the main reason for being there – spanking fresh fish.” That was what one of Gordo’s writers said about the Easy Fish Company restaurant in Heaton Moor when it opened in the back of the family owned and run fishmongers. It’s good.

And Gordo has to admit he has never been. Which is a bit mad, but to be fair, he has tried no less than five times and failed to get a table. The Daughter called him late one Saturday night and invited him to a late lunch at Easy Fish in Wilmslow, the new outpost.

Prawns reminiscent of the Blackpool shellfish stalls 55 years ago, before they became a toilet

Walking through the door was a confusing experience: he wasn’t sure if he was in a bar, chippy or restaurant. Or indeed, IKEA. Lawrence, the manager, led him into a second room, which definitely was a restaurant. It’s a little Spartan; all blonde wood. Not very Wilmslow.

Fatty ordered a ‘nibble’ of crispy black pudding with a nicely sharp mustard mayo (£4.50) for dipping whilst waiting for the rest of team to arrive. It’s the vegetarian variety from the Bury Black Pudding Company and was great. £2-pound coin sized, crisply fried, the filling beetroot-lush with pearl barley masquerading as little fatty bits.

Smoked fish pâté (£7.50) was exactly what it said on the (pretty) jar. The presentation was like something in Pollyanna’s picnic hamper. All it lacked was a gingham tablecloth. Different slices of gingerly toasted bread on the side, garnished with ribbons of cucumber and pea shoots all marshalled by a punchy, herb-heavy chutney of great quality.

Gordo took the tempura king prawns and salt and pepper squid (£14.50; a steal.) Actually, he didn’t ‘take’ them. That’s a term used in most other publications’ restaurant reviews, along with “and Jeremy ‘went’ for…” The kind of thing that ex PR interns called Paris or Venice, (but never Salford) would use. They also use adjectives like ‘delicious’. Or worse, ‘mouth-watering’, which sounds like they’ve had a fucking stroke.

Mind you, Gordo’s mouth did start watering when he saw the dish arrive. It wasn’t tempura by any means, but a really light, well-seasoned very British batter which was crunchy, clean, un-greasy and cleverly seasoned with a touch of heat. It creates a seal to briskly cook and amplify the flavour of the jumbo, tip-top prawns inside; it’s all about their own juices bursting forth that reminds you of the Blackpool shellfish stalls 55 years ago, before they became a toilet.

Salt and pepper squid were superb. Different coating method to suit the Japanese – style harlequin cut to max out the surface to coating, timed to go clean past the slimy stage, but not into rubber.

Mussels were plump fat buggers, in their shells and swimming in a marinara broth of shallots and white wine (£12.00). All nicely cooked out, a touch of cream and the juices giving a near-beefy umami background.

When was the last time a lobster didn’t let you down? Over boiled, maybe crucified and singed on a barbecue, or covered in a completely messed up creamy sauce delivered by a chef doing thermidor ‘with a twist’.

We want it cooked with gentle briskness, the boil timed for simply being split, still near-creamy, covered lightly in very good olive oil or melted unsalted butter of great quality from a farm in a Constable painting and served warm with some salt. Preferably fleur de sel. Or maybe finished quickly on a hot grill and served with bearnaise?

Gordo ordered a half a lobster (£19.50) with three grilled tiger prawns (£7) on the side - both with a lemon, garlic and parsley sauce - so as not to confuse him. To do justice to just how well these ingredients have been sourced, prepped and cooked would have meant that Gordo bringing back to life Turner to paint them, Wilde to write the poem and Lennon to put it all to music. Gordo is a little embarrassed but is trying his best. Sodding brilliant doesn’t quite do it.

What’s with samphire (£4)? The spinach and peas were excellent but samphire? Them stringy bits? Nah. Semi-roasted new potatoes were lovely, especially dipped into the kitchen-made sweet chilli and basil sauce.

Pudding was sticky toffee (£7.50.) More toffee sauce and the option of a lush thick Jersey cream please. Francis Coulson didn’t pioneer this popular dish just to have it all ballsed up with ice cream.

The wine list is serious. And priced to sell. Gordo wasn’t drinking, but a brilliant Meursault caught his eye. It's only £70, a top-end classic white burgundy landed in the UK at around £40 to £45. That demonstrates a willing to offer the diners a great list with low mark up. Go and fill yer boots.

Service is a delight, led by Lawrence at front of house and the food on the evening was by Nick Shepherd and his team; he was at pains to say he was only the sous chef. I’ve got news for you feller; you and the brigade are the dog’s.

Wilmslow won’t like the room. Neither does Gordo. It’s too IKEA. But if you are within an hour’s drive get off your arse and go there. If you can look this writer in the eye and tell him it isn’t the best fish you’ve had for miles, tell the lot of us. Because in a kitchen that can better this, it can only be The Angel Gabriel and his team on the tools. 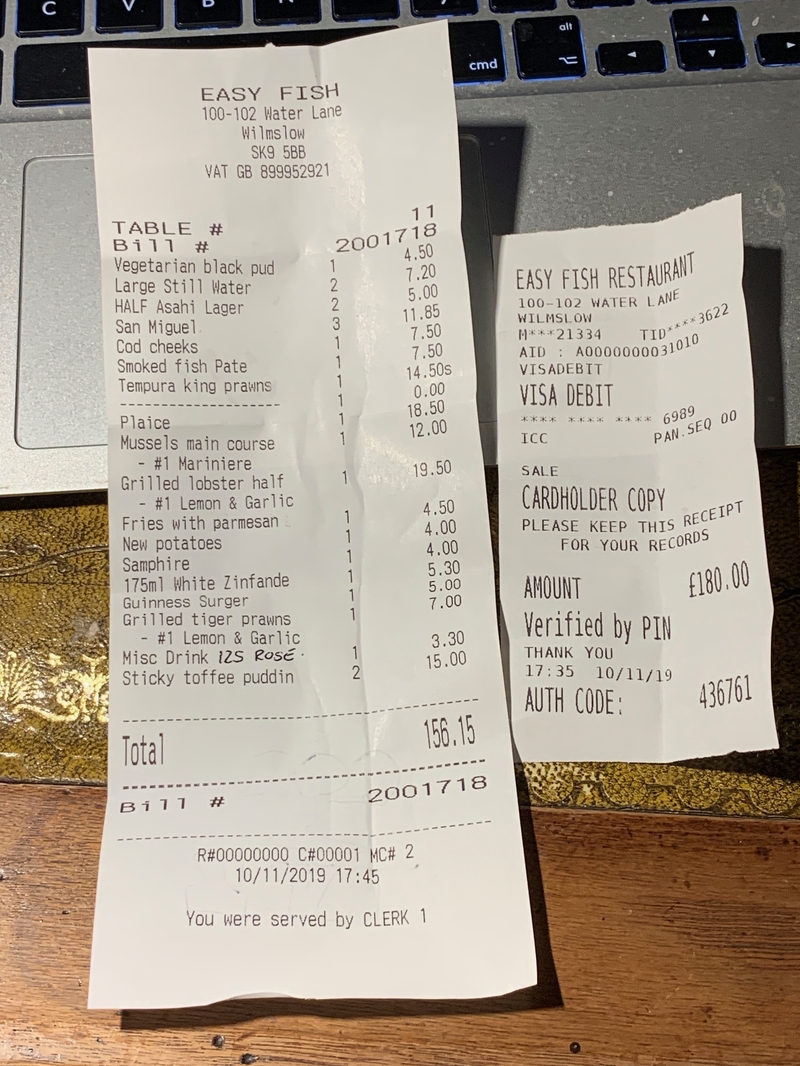