Mary Ellen McTague, formerly head chef at the critically acclaimed Aumbry in Prestwich, has revealed plans to open a new bakery and kitchen in Chorlton.

Located in the old Edwardian creamery on Wilbraham Road, the chef - who recently helped relaunch the Manchester Art Gallery cafe - says the focus will be on the staples of bread, cheese, wine and beer.

McTague has paired up with baker Sophie Yeoman and designer Soo Wilkinson on the project. The trio have so far raised £60,000 with eyes on opening in March, however, have asked for a further £20,000 in crowdfunded donations in order to buy baking equipment (crowdfund is now live).

McTague said: "This is a very exciting project for me - I'll be working with some wonderful, local suppliers who will provide us with produce at the peak of freshness, and completely in tune with the seasons. It's a sustainable, ethical and ultimately very rewarding way to cook for people.

“The focus will be on a small, well-considered menu that will work alongside the staples of bread and cheese, beer and wine that we have on offer. I cannot wait!"

Wilkinson said: “We have considered every aspect here, be it the open bakery where people can watch their food being made, the edible plants on the walls, or the well-thought-out events programme.

“We want people to experience something new, and get together to share food and each other’s company”.

Yeoman, who has lived close to the creamery for fifteen years, said: “The heritage of The Creameries is really important to us. I’ve always loved this place.

“We were dead set on keeping the name and the iconic tiles on the front, and most importantly, we wanted to base our menu on British cheese and locally churned butter in keeping with the history of the building.”

The Creameries will open from 8am for breakfast, later offering a small changing lunch and supper menu of ‘British cheeses, seasonal vegetables, sustainable fish and home cured wild meats’.

The crowdfunding campaign begins at 7am on Monday 27 November. The trio plan to open in March 2018.

Find out more on facebook/twitter/instagram

Manci Doodle 23 November 2017
lucky Chorlton...this woman has given Mcr some of its best food in recent years.

Jacob Morrison 23 November 2017
Right opposite KingBee records too. Fresh bread, cheese and vinyl! This area needed work, it's usually covered in fencing and next to a permanently closed garden shop. Glad something's happening down there at last.
Read Next
● / Drink 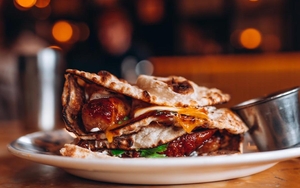