‘I’m just happy it's there’ - The Bull’s Head, Heyside, reviewed

My four-and-a-half year old daughter is thrilled that I’m wearing a leopard print jumper. It felt like the right outfit for the occasion: I’m off to the Bull’s Head in Heyside, run by third generation butcher James Taylor and his family, and I need to blend in with the other carnivores.

These guys know me and I didn’t want to get spotted on my first restaurant review. I’d crossed paths professionally with James Taylor several times, from his street food days as Bobby’s Bangers, and then Bangers and Bacon with Richard Brown, to the now sadly closed Beastro in Spinningfields.

I’d loved their food and appreciated the sheer bloody-minded hard slog. If I’m honest, I’d seen some pictures of James’ food since he’d opened his new venture at the Bulls Head and they weren’t doing him any favours. I’ve eaten his (and Richard’s) food at Beastro and found it to be faultless meat cookery, so I wanted to do two things: one, eat some meat, and two, take a decent picture of his food.

Had I not been there to sample a good cross-section of the menu, it would’ve been a complete no-brainer to go for the offer they’re running in August: two steak dinners free with any bottle of wine. In fact, after the waitress led with it I felt bit daft not ordering it.

James’ signature starter is devilled lamb’s kidneys with capers, sautéed with Madeira and cream on toasted sourdough (£5.50). It’s an enormously generous portion. Tender kidneys piled high might have been a tad scary for this offal-fearer, but my reluctance soon subsided due to sheer more-ishness: the level of spice is pitched perfectly to retain the flavour of the kidneys and, although there seems like a great deal of sauce, I’m just happy it's there.

My friend ordered ham and eggs (£6.50), the same dish James entered into a Breakfast of the Year competition with Beastro. A couple of almost sweet and definitely crispy ham croquettes, black pudding slices and a runny poached egg with a mustard sauce. Once again, it was a very substantial full lunch-sized starter. There was a distinct absence of garnish, edible flower or anything green for that matter. Did it really need it? Not if you just wanted to eat it. If you wanted to take an interesting photograph then you’re screwed.

I ordered rag pudding (£9) for my main. The chips were great: fat and crisp and well-seasoned, the steak soft from slow-cooking with more kidney (yeah I didn’t think that through) and the suet pastry was just as it should be. The ‘gravy’ was a bit of a let-down, more stock-like than an awesome rich beefy, offaly gravy - forgive me if this is not how its done in Lancashire but I can’t help thinking that was a missed opportunity to really wow us.

My friend ordered the gargantuan vegan hotpot (£9) - mashed potato sitting on a root vegetable and pearl barley stew. The sauce had a little peppery kick to it, giving it an unexpected dimension, and we commented on how refreshing it was to see a vegan offering that wasn’t at all flimsy or involved falafel. This stood up to its hearty counterparts and fitted in nicely. The veggies inside were varied enough to keep your interest going, but I can’t help thinking it could’ve benefited from some suspicious green stuff, or a cheeky pickled cabbage to give it charisma (and make it more photogenic.)

Desserts were brown as well. Maybe I should have ordered the summer pudding for a bit of colour, but I blinking love apple pie, and James’ take was an interesting one (£4.50.) A whole Braeburn apple encased in shortcrust pastry, surrounded by toffee sauce and topped with a dollop of vanilla ice cream - different but not fussy, indulgent but not too sweet.

I’d had a near-religious experience at Beastro with a banana sticky toffee pudding, so I was silently rejoicing when my friend ordered this (£4.50). It was sadly sans-banana but hallelujah it was still a naughty minx of a pud.

This is most certainly a family project. They’ve got their hard work, generosity and butcher’s soul out there in every part of the menu and their no-frills approach means they can pass on to their customers the benefits of belly-busting portions and prices so reasonable and well-meaning that Tom Hanks would play them in a movie. It just means their pictures aren’t very pretty.

I had hoped that James would be busy in the kitchen so he wouldn’t spot me, but lo, by the law of sod, the man who wasn’t supposed to be there, was of course there. My sneaky prowl into the world of reviewing was foiled by the warmest welcome in catering: one of Richard Brown’s great big squeezes. “I HEARD you were at Man Con!” was his delight, and my cover was blown. The leopard camouflage hadn’t worked. 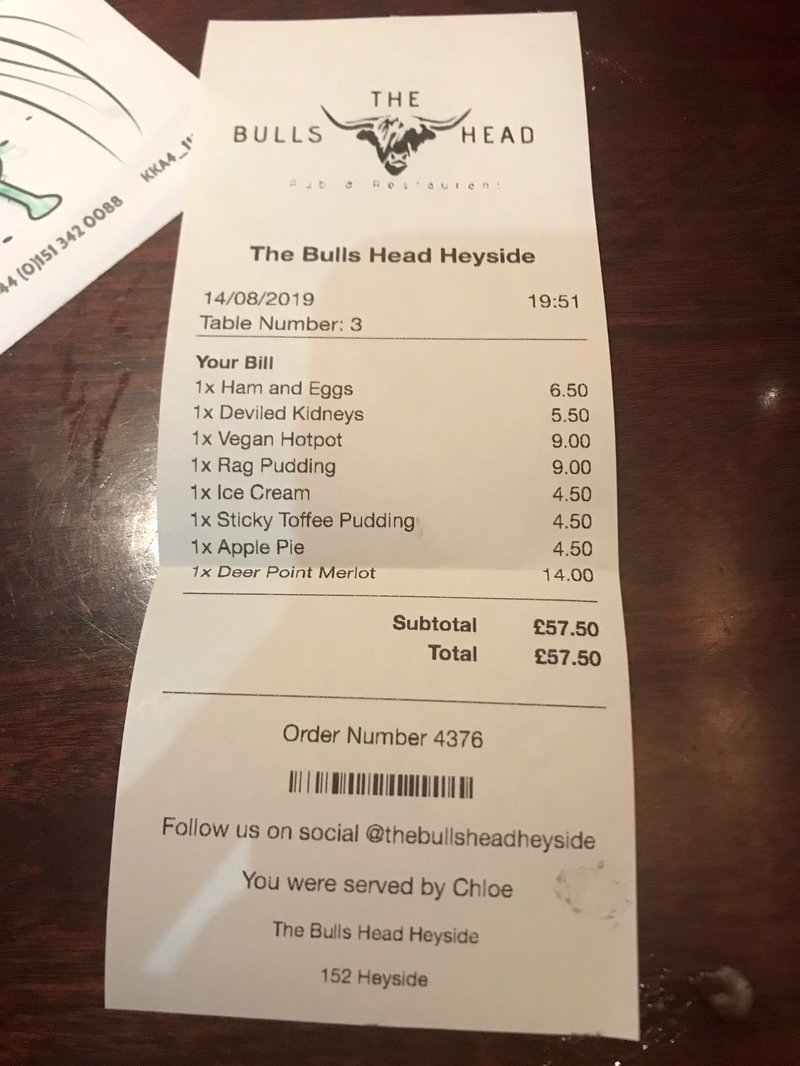