‘If you’re easily offended I’d suggest you stay away’ - The Book of Mormon, reviewed

Joan Davies is a convert for this gem of a show

You can hardly fail to have heard the hype for The Book of Mormon, hit musical theatre show devised by Trey Parker and Matt Stone, of South Park fame, and Robert Lopez, who wrote for Frozen. It’s finally reached Manchester.

It’s a story of Elder Price and Elder Cunningham, two novice missionaries assigned together – they are only allowed to part to visit the bathroom – to convert the inhabitants of a remote Ugandan village.

Despite the shock tactics, there’s a deep love for people, for beliefs, for uniting as a community

The opening number ‘Hello’ sets the standard: a pacey and funny growing rondo of our doorstep experience of Mormons, politely ringing our doorbells and offering us answers and a book. From then on, the show romps through a thoroughly entertaining two-plus hours of engaging though rather forgettable songs and clinched-it non-sexy dancing, in a classic nerd-to-hero story, taking sideswipes at organised religion, Disney, the American dream, and stereotyping. 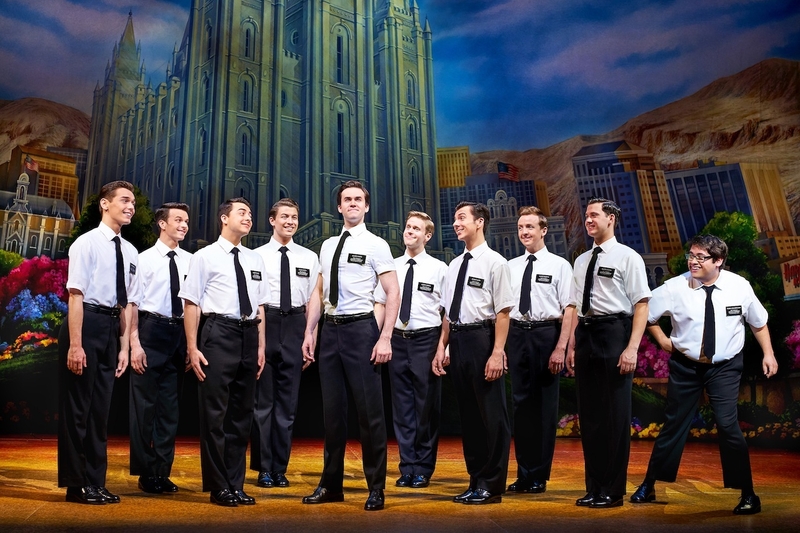 The opening in Manchester is headed by two American actors, Kevin Clay as Elder Price and Conner Peirson as Elder Cunningham, who’ve both performed the show on Broadway. Clay delivers an outstanding performance as Price, the supreme clean-cut all-American confident boy, with just enough room for doubt. Peirson captivates the audience almost immediately as the needy nerdy Cunningham, desperate for approval. Guess who gets the love and the converts, particularly the beautiful both-inside-and-out, Nabulungi, played with considerable charm and sass by Nicole-Lily Baisden.

I’d have preferred a scarier version of hell. That particular scene reminded me of amateur productions. Perhaps that was the point.

There have been critics. A show devised by South Park writers is bound to attract them, and if you’re easily offended I’d suggest you stay away. But I’m struggling to think of who might not enjoy it. I wouldn’t take a child though; they just wouldn’t get it. You need to be old enough to have opened the door to a Mormon without immediately shouting for your mum. The African setting mocks Western stereotyping of Africa, rather than Africa itself and widens the musical scope of the show, adding more rhythms and dance styles and a gentle humour.

Somehow, throughout the show, you’re on almost everyone’s side.

Despite the shock tactics, there’s a deep love for people, for beliefs, for uniting as a community, and even for the idea that fiction presented as fact might not always be so bad if it encourages the best in ourselves. Religion and Disney might share this quality.

The Palace Theatre audience loved it.

Want a night away from the TV news, from Brexit and anointing a new Prime Minister? You can escape with tales of tall stories, inexplicable beliefs, missing evidence, blind faith, a single saviour and a guaranteed standing ovation.

The Book of Mormon is on at Palace Theatre, Manchester until August 24th.

We're giving one lucky Confidentials reader a pair of tickets to see The Book Of Mormon at Manchester’s Palace Theatre on Thursday 4 July at 7.30pm. Click here for the chance to win .