Location, location, lamination? Will Thai Kitchen No.6’s joyous insouciance triumph against geographical ill omen, thanks to the charms of a wipe-clean pictorial menu and food at least the equal of Chaophraya, its glamorous big Siamese sister across the road?

Learning as he goes along was his honest reply.

That corner of Chapel Walks and the parade leading to King Street has known both footfall and tumbleweed over the years. Much rejoicing when Grafene took over the old Brasserie Blanc site that had lain empty for years and when the veggie standard-bearer 1847 moved in below, lock, stock and lentils, things were looking up. Both establishments vanished into the mist in early 2019. Nobody this time has been able to blame the Cross Street Metrolink works for the blight.

So it’s as well that the new family Thai restaurant in the old 1847 premises is named after 6, perhaps the luckiest number in Asian fortune telling. As we approach noisy neighbours Mash Tun (overhead in the heavily remodelled Grafene) are thudding out the promised live music that is part of a package that includes sausage, mash and craft beer.

So it’s a relief to be greeted at the desk in No.6 by a small child bearing, you guessed it, colourful laminated menus of the kind you’d find all over Bangkok … Nonthaburi, or Chang Mai for that matter. It’s a welcome more gracious than the golden pagoda glitz of Chaophraya, which over a decade ago ‘introduced’ Manchester to Thai cuisine. Five years ago the Leeds-based chain did the same for Thai street food at bric a brac cluttered Thaikhun in Spinningfields. Fun, but you’re not going to find the authentic dishes unearthed in David Thompson’s magisterial Thai Street Food.

So how authentic is Thai Kitchen No.6? Immediate impression is the food is less searingly spicy than in either My Thai in John Dalton Street and Tib Street or the nearest equivalent, that survivor Siam Smiles, now up in the Great Northern Warehouse.

There is a vague link in that the head chef in both is called May. Smiles’ chef Lallalin ‘May’ Mahasrabphaisal famously learned to cook via YouTube videos. No.6’s matriarch May stays in the kitchen, so we can’t ask her whether she developed her skills at her mother’s side. We ask our front of house man which restaurants he has worked at before and he says this is the first – learning as he goes along was his honest reply.

Communication is not straightforward – our eventual bill will be in the Thai language. We do gauge, though, the restaurant has grown out of a home delivery service for students, specialising in Tom Yum, rice and egg. They still do takeaways and the Spartan interior is little changed from its days as 1847.

They are promoting Thailand’s best-selling beer Leo, made with rice, but we are happy with hoppy bitter Singha, still brewed in Thailand, slightly more expensive at £3.50 a small bottle. Its floral pepperiness is a perfect foil for an appetiser of Jeeb koong (prawn wontons, £4.95). So far so good.

Hoi Tod (crispy fried mussel pancakes, £8.95) is not the most elegant of dishes but it represents the homely cooking that No, 6 is aiming at. Papaya salad is my benchmark Thai dish. We ordered it as Tum Talay (£10.95) with seafood, which consisted of a couple of prawns and some squid. Textures were fine but it lacked the in-your-face lime and chilli flavour we sought. A rack of spicy sauces, sriracha and the like, was at hand to raise the heat level on our Pad Thai with deep-fried tofu (£6.95). All in all an enjoyable experience but lacked the spiky spicing of nearest contender Siam Smiles. 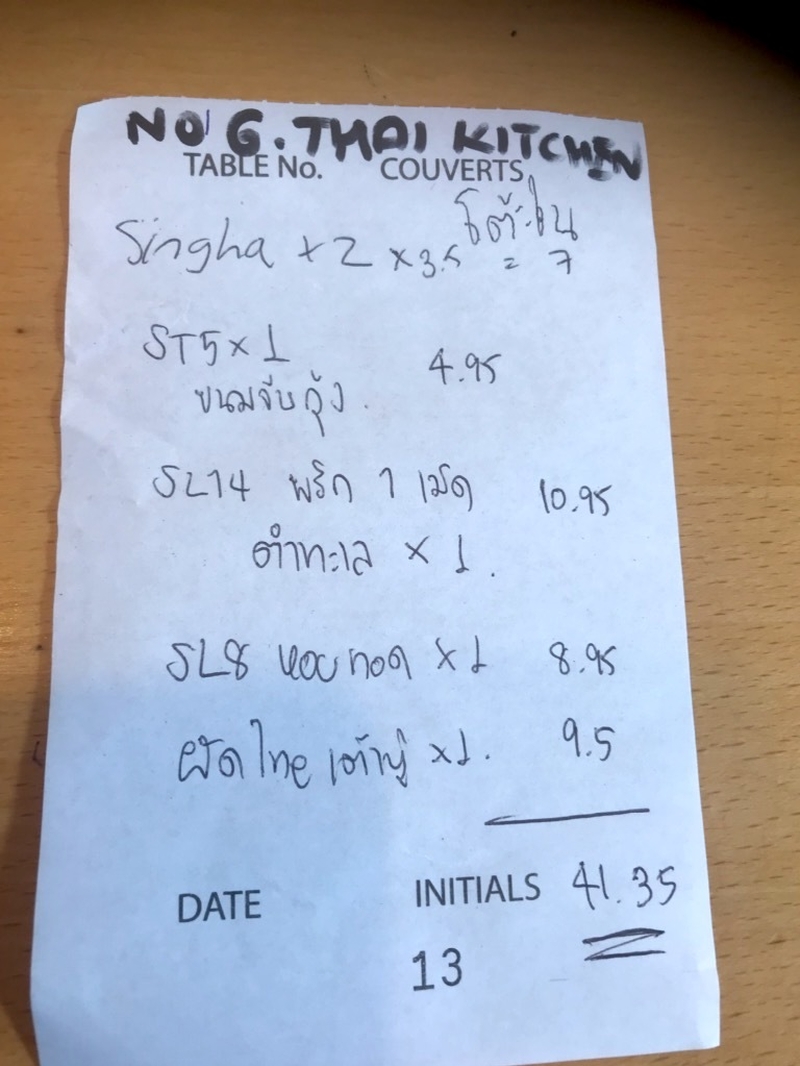