Taste It: this unlikely Salford pizzeria & gelateria has just one table - and it's brilliant

And it’s only five minutes walk from the city centre

We all think we know ice cream. Some of us might even consider ourselves aficionados, very particular about our favourite tubs and flavours. But until you’ve tried the ice cream made by gelataio femminile, Simona Ferraioli, trust us, you don’t.

Simona, who hails from a small village on Italy's Amalfi coast, lives and breathes gelato. She studied at the University of Taste in Perugia, then at the Italian School of Gelato (yes, that is an actual place) where she now occasionally goes back to teach. “It is the only school in Italy that gives you a diploma. I love gelato, I studied gelato and I am still studying all the time,” Simona tells us.

Simona moved to Manchester with her husband Gianfranco Fattore (who studied the art of making pizza) and they opened Taste It, a tiny traditional pizzeria and gelateria on Blackfriars Road, in July 2017. “On the day we opened, we posted on an ‘Italians living in Manchester’ Facebook group and we had three hundred customers,” Gianfranco tells us. “But we were giving away ice cream for free.”

Since then, word had spread as people realise that the city has gained something very special. “People come from all over for our ice cream,” says Gianfranco. “Quite a few people within the Italian community know about us, but we haven’t quite hit the mainstream. The best way to spread the news is word of mouth, and that’s working. Some customers buy ice cream in larger tubs to take home or they come here for dessert maybe after eating in a restaurant.” “In Italy there are more than 100,000 gelato shops,” adds Simona , “but less than a thousand of those make the ice cream in the traditional way. There’s a huge difference. Our ice cream is definitely something you won’t find anywhere else in Manchester.”

When Simona talks about ice cream, it’s like watching someone in love talking about their paramour. But good ice cream is the sum of its ingredients, of which she is very particular, of course.

“I use Modica chocolate from Sicily, which is also where I get the special Bronte pistachio nuts which are grown beside the Etna volcano. Some customers complain when we don’t have strawberry, but I only use fresh fruit. It’s very important for me to follow seasonality, otherwise there’s no point. In the summer I get special lemons from Amalfi and I make sorbet. In our display, you’ll never find the blue ice cream, NEVER! I’m sorry. Only pure flavours. Not even Smarties.

“Hazelnuts from Piedmont are the best, but they also have good ones from Giffoni, so I get those when I want to change the recipe a little bit.” 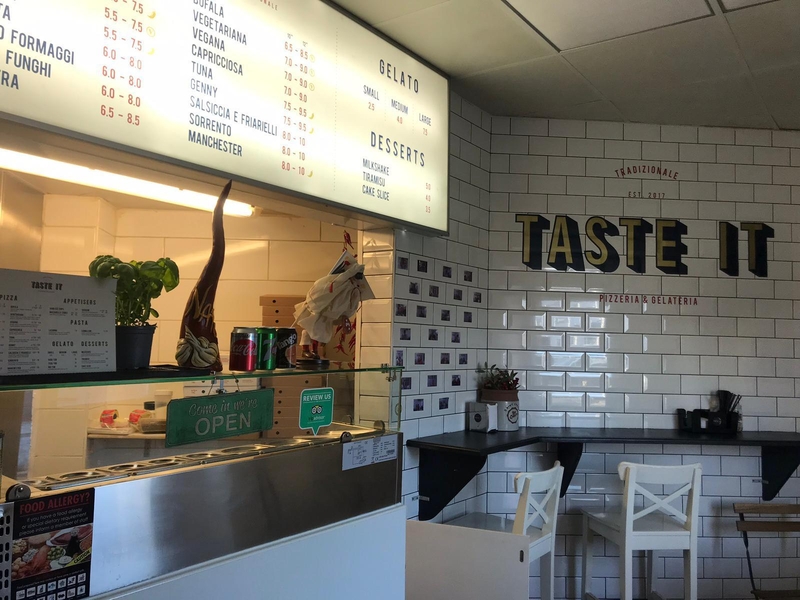 Now she’s talking. Good quality nocciola isn’t easy to find in England, never mind in Manchester. Hers is utterly wonderful; intensely flavoured, completely natural, with no artificial aftertaste. The texture is just as special – smooth and almost chewy. “The one you are eating now is 48 hours ageing in the machine to make the texture more velvet,” Simona tells me. “Now I make you a fresh one you will see the difference.”

I try some freshly churned salted pistachio ice cream, straight from the ice cream maker. It is different. Almost like butter or silk; smooth, rich and creamy, with a roasted nut flavour with tiny grains that are there, but also somehow...not.

“This is the traditional way of making gelato,” says Simona, “not even in Italy will you often find ice cream quite like that. I mix it twice like they did it in the past. I am always learning and changing, always looking for the perfect ice cream. It’s like my baby, I really cannot imagine doing anything else.”

How many flavours does she make? “Eighteen, but they cannot all fit into the display counter at once. We always let the customer try the ice cream, for us it’s very important. In fact that is the reason before our name, ‘Taste It’.

While Simona specialises in ice cream - which is a harder sell in Manchester in wintertime - Gianfranco specialises in pizza and bread, which he has studied in great depth.

“What we do is dependent on the season here,” he admits. “So we also sell ten and twelve inch pizzas, baked pasta dishes like lasagne and cannelloni and arancini, which we prepare during the day when we’re closed. Now it’s cold, its quieter for ice cream, so pizza is popular – especially now we’ve started evening deliveries within a two mile radius."

They also have a bike with an ice cream freezer on top which they take to events. This summer they can be found at Manchester Jazz Festival and Festa Italiana.

Taste IT quickly became one of the highest rated takeaways in the area. They open from 5pm at the moment, but in summer they will open earlier. They have people coming in to eat pizza and ice cream, but it’s takeout mainly because their tiny place only has one table of two and a counter with four stools.

“Many people ask when we are going to get a proper restaurant,” explains Gianfranco. “We’d like to have a larger base, with a few more seats, but we’re not sure yet. We opened the shop because we like to spend time with each other. On top of that, we are happy making people happy. When they come here and they try our food they all say ‘oh my god’, and this makes us feel happy.”