Reading the blurb for Tahi, the recently opened New Zealand ‘eatery’ in Circle Square on Oxford Road, you could have been forgiven for wondering what one was. Kiwi food is new to this writer, who got concerned when, Googling the word Tahi it came up as ‘excrement, faeces, droppings’

Now I know that Kiwis have a very laid-back, self-deprecating sense of humour but I thought this was taking it a bit too far.

Then I double-checked and realised I had read the Malay result, not the Māori. Tahi means ‘together’ in Māori. ‘Kiwis and Māoris have a reputation for great hospitality’, so says the restaurant’s website.

He really knows his New Zealand wines and his list is short, but, by the Eye of Sauron, he knows what he’s doing

This isn’t all that apparent at the start of an England vs All Blacks rugby match, when the All Blacks do the famous challenge, the Haka. I haven’t bothered googling the meaning of that. I can tell just by watching that it means “we’re going to rip your fucking head clean off your shoulders and ‘tahi’ right down your neck”.

Sitting down on a Saturday morning for a quick coffee, I realise Tahi is far more than a coffee shop-come-brunch gaff, for which Manchester is well served these days. It’s a large restaurant, modern, airy, and comfortable with a bakery in the far corner, resulting in some homely, comforting aromas wafting through.

I liked the look of the place and the staff, who were charming. I tried the eggs Benedict with smoked bacon (£11) and got a shock. Instead of sitting on a split muffin, these poached eggs recline on a pile of hash browns. It became my dish of the month in October.

I’ve also been told that Tahi’s version of mince on toast, made with braised beef cheek and served with truffled hollandaise (£11) is heroic and I'll be popping back to try that one.

I have since been back and eaten off the full daytime menu and I need to tell you more.

The menu is interesting but difficult to describe as a ‘type’. Non-Asian Pacific Rim possibly, but with the odd nod to Japan. It reminds me of Northern Californian and Australian food; sort of European with well thought through points of difference and wasabi knocking about.

The Kiwi burger (£14) comes out with a handful of Kumara chips made from sweet potatoes. Good stuff indeed, but I think the portion is a bit mean. Mancs like mounds. Tempura pickles are great in the mix and the bun is made from Japanese-style Shokupan milk bread. It holds together well in the hand - an important point, burger boys. Stop giving us burgers in sweet brioche. Very Silly.

The patty is from good, aged beef with tomatoes, beetroot, and a fried egg all dribbled with a bacon whisky sauce. It’s a good ‘un. Flavour and texture first - the crunch is what burgers are about. I’ve also come to like tempura pickles (£4) when done properly. Give me a side of these with wasabi mayo and I could eat a bucketful with lots of beer.

Potato gnocchi with braised lamb ragout (£14) is as good as anything you’re about to get on a cold autumn lunchtime in the Italian Alps. The gnocchi have a lightness to them which is difficult to achieve. The ragout, a true rib-sticker. Deep, dark, and unctuous with basil lifting and amplifying the aroma. The aged cheddar is a prize fighter; if I were on my own, I’d take a second portion.

The puddings here are exceptional. Those Kiwis do a lot well, but in Tahi they are excelling at the baking end of things. Bread and butter pudding (£7) is a firm, satisfying rendition of the classic with toasted marshmallow and caramelised cream. If you’ve got a sweet tooth, you’ll want to marry the pavlova (£8). It’s a classic again, with different takes on fruit to balance, build or knock down the sometimes-cloying sweetness of the meringue. I’m pleased to say this one has a sticky interior.

What makes Tahi so refreshingly different here are the owners, the remarkable Jon Perry, and his wife Rebecca. Jon was a professional footballer at Barnsley and also played for his country. He really knows his New Zealand wines and his list is short, but, by the Eye of Sauron, he knows what he’s doing.

If you are interested in wine and want to know a thing or two about the very top-end New Zealand vineyards, this is the place to come. A bottle of Akarua RUA Pino Noir 2021 at fifty quid, showing a sensible markup (it’s around £20 wholesale) is a blinder. It comes from Bannockburn in the Central Otago region, which speaks volumes.

Lavender, which I tend to notice more in New Zealand Pinots at the top end gives the quality away on the nose, followed by herbs across the palette (thyme?) then the famous brambles and red berries of the variety. Soft and balanced. I love it. We’re given a taste of another of Jon’s babies, the Framingham Riesling. I’m having a bottle next time.

This is the stand out restaurant of the genre in the city - not that there is much competition yet in New Zealand cuisine or even Pacific Rim food. It’s awake morning noon and night, changing with the hours. A real delight. The staff are super-helpful, the manager an old friend, a real pro. It’s a Gordo Go that’s for sure. 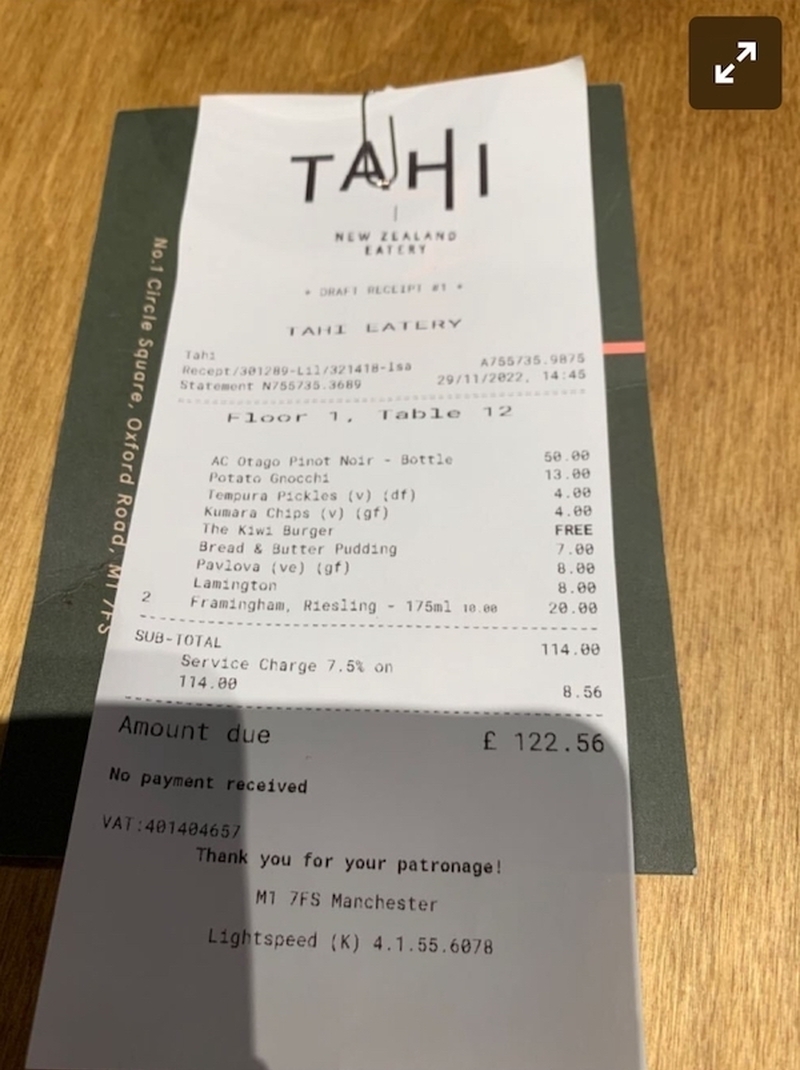