Sale is a funny old place, a pocket of South Manchester that benefits from all of Trafford’s good connections and resources, but still thinks of itself as a small Cheshire town that just happened to get engulfed by a big city. If you go out there on a Saturday night you will find the restaurants are bustlingly full of locals, even it is not (yet) known as a foodie destination.

Table 10, in the centre of Sale, is a case in point. It is clear that the locals love it. From sources as diverse as Facebook and TripAdvisor (ok so not exactly the Michelin Guide, but still…) the restaurant gets glowing reviews. But when I suggested it as a review to the editor, his response was “um never heard of it”.

I think I’ve found the reason why it has managed to pass under the radar; Table 10 exists in another dimension only accessible through a wormhole in the fabric of spacetime. That, or it's just a few too many stops of the tram for most people, including my diner companion in special relativity, whom I met, appropriately, during my first hospitality job. We were thirteen, it was the nineties, and the pub was in the semi-rural town we both grew up in. Let’s call it Normaltown.

The labour laws in Normaltown were clearly not too well enforced, as we worked up to eight hours at a time ferrying huge plates of Steak Diane and sticky toffee pudding to local customers. My friend regaled me with the jolly tale of how the owner once called her 'a bitch' for requested reduced hours in order to concentrate on her exams. This was, of course, very unjolly and very illegal. But then, it was the nineties.

I remember how bloody hard the work was, and though I've since worked in many restaurants, it was that particular one which made me appreciate just what a tough gig waiting on tables is.

Anyway back to the future (or is it the past?); Table 10 has quite a bit in common with our erstwhile place of employment, foodwise at least. In a burst of gastro-nostalgia, my companion went for the full classic 90s pub menu: calamari (£6.50), Steak au Poivre (£18.95) and hot chocolate fudge cake (£4.95).

The calamari may have been out of a bag, but the steak seemed like a good piece of meat, if rather drowned in the peppery sauce. The chips were very decent. The hot choc fudge was as it should be – a huge hunk of a bought-in cake given a whizz though the microwave and splattered with ice-cream. It was hard to fault such a seamless reproduction of the past, but hard to get massively excited about it either.

The highlight for me, and a bit of a blip in Table 10’s space-time continuum, was something called a 'Bobotie', here served as a starter (£6.95). Bobotie is a South African dish that, at a very generalised pass, most resembles moussaka. Mince is baked with spices and topped with a sort of savoury egg custard. And it’s delicious.

This could be Table 10’s concession to 2018 as South African food is apparently very ‘in’ this year. Though I expect it is more to do with the fact that the chef-patron hails from that part of the world rather than any desire to be on-trend. Anyway, I was happy, as always, to be introduced to something new and tasty. And while I wasn’t sure about the greasy-looking poppadum and salty lime pickle, it actually all made sense when eaten.

I was less impressed with the cheese and leek sausages (£10.95) for my main. Well actually, I found them very palatable. What bothered me was that I’d heard this was a vegan and vegetarian-friendly restaurant, but that these cheese and leek bangers were the only veggie thing to be found on the menu (and I had to hunt those out from the early bird menu). I may be a committed carnivore myself, but everyone deserves a good meal, even those who choose to deny themselves the pleasures of the flesh. The mash was also a tad lumpy and the lemon tart had more than a hint of egg (£4.95).

I’m finding Table 10 difficult to review, it’s a bit like going back to your home town or visiting your parents at Christmas. Nostalgia wraps around you like a comforting blanket, you feel warm, secure, safe. But then you remember the reason you left in the first place. Your shoulders slouch and your eyes ache from rolling as you revert back to your cynical, teenage self. To be transported so swiftly back to a time of heavy-duty hormones was interesting, but it wasn’t conducive to fair and rational appraisal. It’s like asking me if I like my mum – the DNA is too tightly intertwined to really ever know.

But then the locals like it, and I can see why; the atmosphere is homely, the service is friendly and professional (no overworked 'bitch' teens here). Normally I’m hugely in favour of places that wilfully ignore every ridiculous trend to concentrate on serving punters what they know and love. In this Table 10 excels. But after an evening of carb-loading and reminiscences (we even finished with an Irish coffee, the likes of which I haven’t seen since 1996), I felt strangely happy to step out of the familiar embrace of Table 10 into the cold night air of 2018.

Mike Batho 18 January 2018
I've never even noticed it, but given how outdated the Google Street images are for that part of Northenden Road - and Table 10 was still there - they must have dedicated local patrons. That stretch of road has a high turnover of here today, gone tomorrow food and drink places...
Read Next
● / Bars 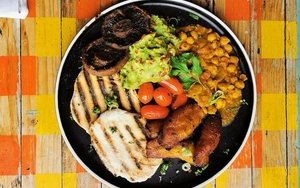 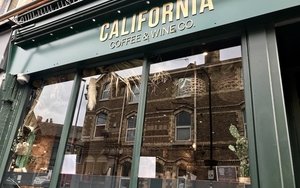 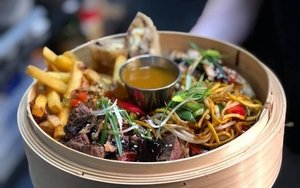 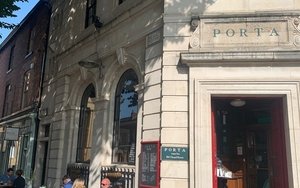