Stars of the small screen

Why underground cinema is getting all the credits

UNDERGROUND cinema may sound like the preserve of a dedicated cinephile who gets thrills from settling in to a velour seat to watch a movie very few others even know about, but across the UK a trend is taking place that gives it a very literal meaning. As new cinemas pop up (or down) around Manchester, film buffs are cottoning on and finding more intimate and luxurious ways to enjoy watching a silver screen. 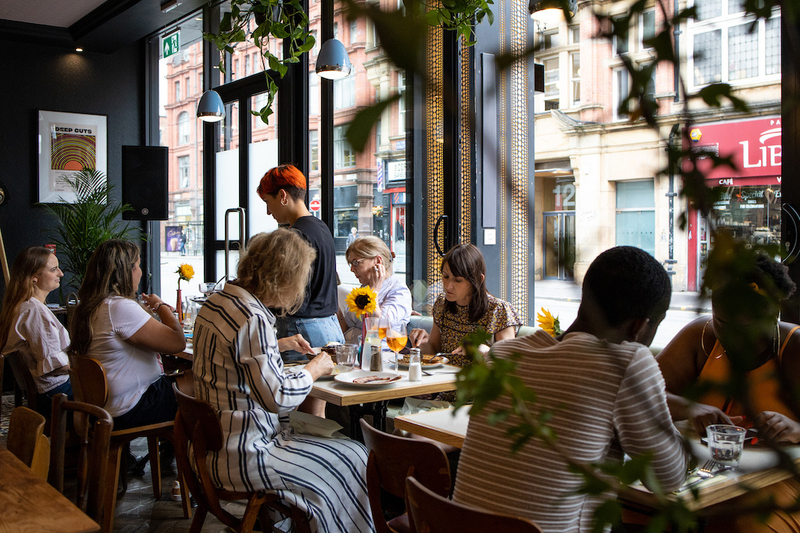 Dark, dimly lit and decorated with a nautical theme of ships’ lanterns and flickering candles, Hold Fast Bar has a small cinema room tucked away where visitors can watch cult cinema classics. You will find the bar, inspired by the tales of French writer Jules Verne, in the basement of the former Hatters Hostel, now Selina, in the heart of the Northern Quarter. Located in an impressive restored Victorian building on Newton Street, Hold Fast have worked with the building’s original features to emulate a cosy, atmospheric sailor’s drinking quarters. Inside there’s a small cinema screen where the team host free ‘hangover Sunday’ nights for customers recovering from the night before. There’s also a vintage game room complete with old Sega video games. 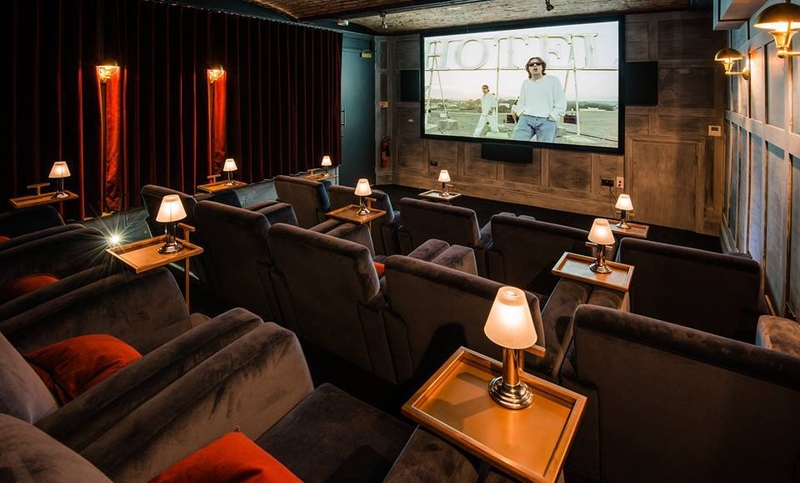 Located in a grand Italian Renaissance building, designed by local architect Edward Solomons and originally built in 1872, King Street Townhouse has been sensitively expanded into a baby Grand Hotel. Among its eclectic features is its underground private screening room in its listed cellars – a luxurious 20-seat cinema with state-of-the-art screen and sound system, plush sofa seating and soft, ambient lighting. Unlike the urban feel of Hold Fast, King Street is more about a luxurious, high-end cinema experience. And it’s not free – visitors can hire the cinema for £350+VAT. For this you will be treated to an arrival drink, popcorn, sweet treats and blankets if you fancy a real home-from-home snuggle on the sofa type of evening. This is top-notch A-list style viewing in swish surroundings – all that’s missing is a red carpet. 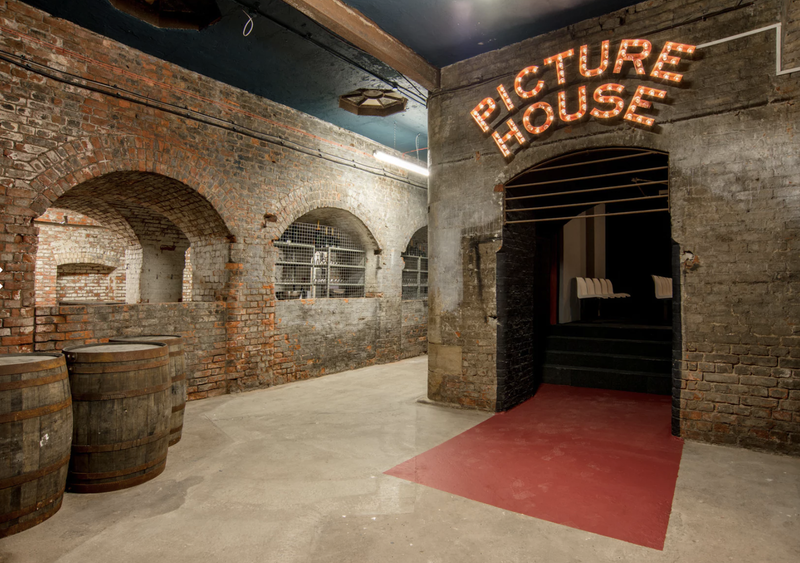 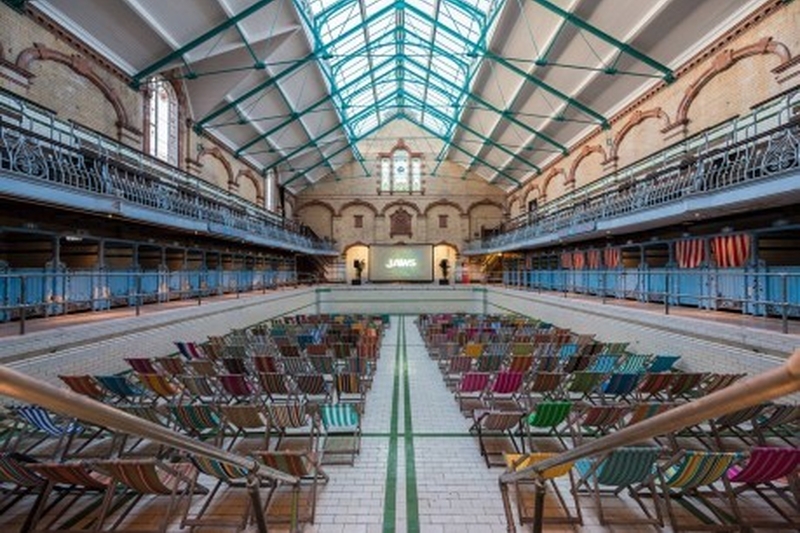 What better use could there be for an unused Victorian swimming bath complex than to show special screenings of cult movies? The Village Screen Pop-up Cinema regularly hosts screenings in the stunning Grade II*-listed Victoria Baths building, designed by Manchester’s first City Architect, Henry Price. Guests can pull up a deckchair below ground level in the former Gala Pool, which was in daily use for 86 years but closed as a public baths in 1993, with swimming taking place for only the third time since then on 7th and 8th September this year. The baths are also used to hold other events and weddings, and during the pop-up screenings, visitors can watch cult classics such as Jaws, The Lost Boys and The Witches in a truly unique setting.

And elsewhere other boutique cinemas are opening their unconventional doors… 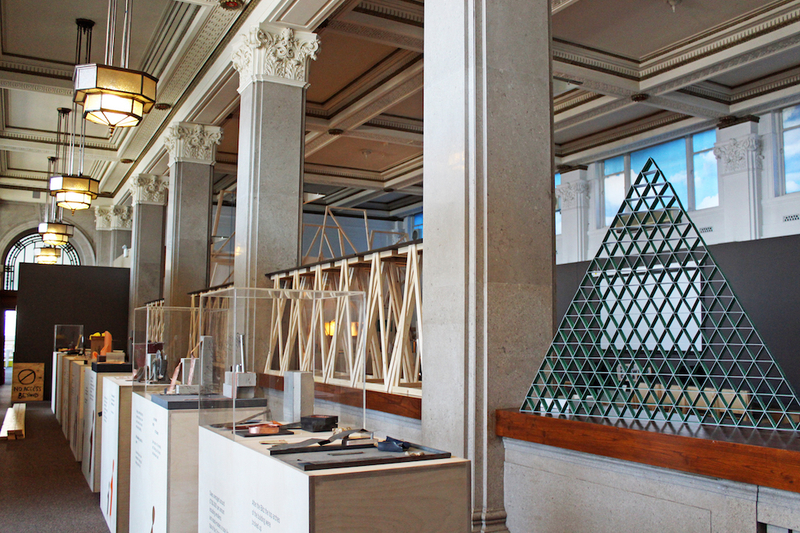 Ok, so technically this is not an underground cinema in the literal sense of the word but as far as underground cinema is concerned this is worth a mention. Situated in a former bank on Hanover Street, Now Showing Club is Manchester’s first dedicated documentary cinema, and this year it is showcasing 50 films from film production company Dogwoof’s back catalogue. Visitors can enjoy a curated selection of titles, with screenings every Monday and Tuesday. The cinema is part of Old Bank Residency, ‘a twelve-month occupation of a disused bank, allowing space for creative practices to experiment, collaborate and grow’. 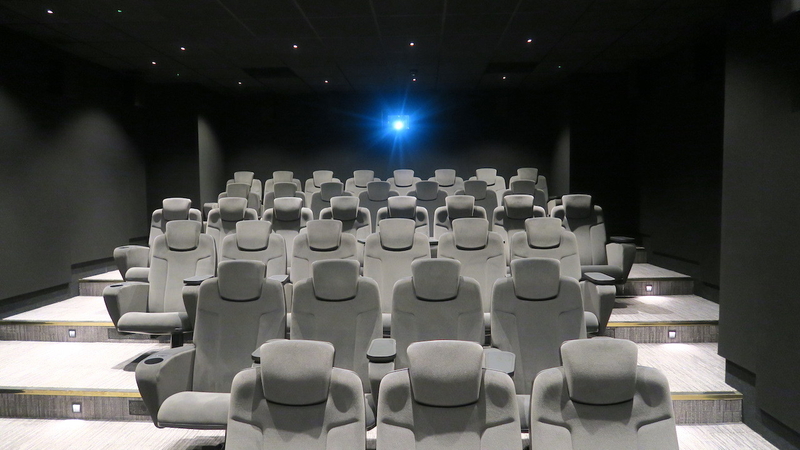 For a truly intimate cinema experience, the brand-new Cultureplex will be offering a mini cinema with 38 reclining seats. Set in the former railway goods warehouse right behind Piccadilly Station (and former Place Hotel) on Ducie Street, the space also houses a restaurant, bar, communal lounge and flexible events spaces with outdoor terraces. This boutique cinema has been fitted with high-spec equipment and has a schedule co-curated by First Street’s very own HOME. Showing two films a night, three at the weekends, visitors will also be able to enjoy their own individual cocktail table built into the arms of the seats.

KStars: a shop riding a choreographed wave
What you say
Read Next
● / Sports