Davey Brett lines his stomach with one quid tacos

We’re in Withington and we’re walking around in the sort of whimsical, late evening sunshine that Lana Del Ray might write about in her diary if she regularly sat upstairs on the 101 or 42 bus.

Today’s trip is brought to you by a quick stop-off at Steranko on the hunt for some elusive size 5 Reebok Beatnikz (any leads, DM me) and then back up Burton Road past the tram and across the border for a pint. The Red Lion’s just had a refit and the beer garden is prime for soaking up the day’s final rays. Deceptively small at the front, the back garden stretches out like the inside of Mary Poppins’ handbag.

There’s good crawls to be had around here. Orion will do you a cheap pint, giving you the chance to sit among Bristolian and Home Counties gap yah types, their baggy, democratic 90s clothes camouflaging lucrative birthrights. Nearby XLR meanwhile will do you a solid slice of subterranean DnB if you’re that way inclined.

You can also get your fill of 44 tequilas if you shimmy up Wilmslow Road to Southside Tequila Joint, formerly Solomon Café Bar, which is where we’re heading. A dive bar through and through, the headliner here is tequila but if you’re hungry there’s a selection of tacos and sides.

At a particularly inflationary point in history, when the only notable public figure who seems to give a single political fuck is Martin Lewis, a taco menu made up of £1 tacos is an attractive proposition. It ushers Southside into a cut-price scran fraternity alongside Saltdog Slim’s £1 happy hour hotdogs, Wolf At The Door’s £1 bao, Corbiere’s free pizza with any drink (practically theft) and cheap wing OG Bunny Jackson’s. Many of which are cousins of Southside.

Inside, the theme is consistent with those places. Bingo card at the ready. Couple of zero-hour contracted flies robotically doing circuits in the toilet, graffiti on the walls, kitchen roll on each table to wipe away the sauce and grease and an insistence on QR code online ordering.

Southside’s cheap tacos attract an intriguing slice of life. A mixture of the aforementioned Fresh Meat characters but also 40 year-old, relationship rescue date nights. The one taking place next door to us hits a bit of turbulence just as Kaiser Chiefs’ Everyday I Love You Less and Less comes on. Thankfully nobody is hurt when a notable Dirty Pretty Things blast from the past comes on.

We’ve ordered two of everything on the taco menu. One each. I’ve had a Margarita (£8.50), my tequila-loving dining partner has had a Paloma (£7.50) and we’ve treated ourselves to two glasses of Clase Azul Plata tequila (£9 each), all of which are excellent.

When in the tequila equivalent of Rome and all that. There’s no salt and lime here and "Marg of the Month" is Irn Bru.

The tacos all arrive at once and we go through them basket by basket. Redman (£1) first and it tastes like a shoe. The chicken is leathery and the buffalo and blue cheese sauces don’t really turn up. Celery and chives are mere window dressing. The tortilla is limp and sad.

All of the tortillas are limp and sad and a bit cold but we want to get the taco dust sheets down before we start painting our stomachs with tequila and mescal. Snoop Dogg (£1, vegan) follows, comprising Moving Mountains vegan hot dog, jalapenos, crispy onion, American mustard and ketchup. It tastes like childhood hotdog nostalgia and confirms my long-held belief that crispy onions are the food world’s all-in-one turd polish.

MF Doom (£1.50, vegan) brings together chipotle, portobello mushroom, garlic aioli, pink pickled onions and coriander. It’s the most mushrooms my dining partner, a fungiphobe, has ever eaten. It’s one of the better ones. Method Man (£1.50, vegan) meanwhile is an interesting hit of Sunny Delight and Terry’s artificial citrus but the chicken results in quote of the evening: “Why does all the real meat taste fake and the fake meat taste real?”

Kendrick Lamar (£1) is lamb kofta with feta and pomegranate in a taco but carries the same gritty corned beef taste and texture as the Notorious B.I.G. The latter trying to recreate a cheeseburger but nothing stands out from a list of cheeseburger, crispy bacon, Southside burger sauce, gherkins, onion and iceberg. Kanye West (£1), a humorous ode to the South Park fishsticks joke is fish and chips in a taco with a bisected fish finger, minted peas, tartare, ketchup, dill and a slice of lemon. It’s a welcome change from the meat.

Mac Miller (£1, vegetarian) completes the taco flight with the opposite of a cheese pull. Nondescript powdery carb interiors, chipotle mustard, gherkin and spring onion are all indecipherable. We’ve eaten a lot but we don’t feel full. We’ve spent £17 on tacos but it doesn’t feel worth it.

Chicharróns and guacamole (£4) provide much-needed bang for buck. A generous mound of fluffy quaver-like pork scratchings. Meaty yin to the guacamole’s fresh, beige relief yang. A basket of loaded nachos (£5) does little to lift the feeling of defeat but at least we’ve lined our stomachs.

There is positivity among the meh. Staff are great, effortlessly friendly and happy to talk through everything that comes out. A staff member notices we’ve been ordering tequila and when he brings out shots of DeLeon Anejo (£10 a shot), he recommends the red wine barrel distilled Codigo Blanco Rosa (£5 a shot) which we take him up on alongside a gloriously smoky Casamigos Mescal (£8). It’s a shame the food isn’t taken as seriously as the tequila.

Nobody wants to write negatively about food and it's a shame because there's a lot of potential at Southside. I’d happily go back. It’s a fun place to hang out, listen to the 00s NME anthems of your youth and drink a bunch of tequila in the suburbs. Unlike Lego however everything can’t be awesome all the time. Even the Tories are cracking down on fake reviews.

On a spectrum comparing Southside to other places pushing attractively cheap food (for humanity and the planet’s better or worse), others are doing more of a service to that person nervously looking at their last tenner. That’s the person who comes to mind when I say the booze and vibes at Southside are excellent but the food isn’t doing the quid in your pocket any justice. 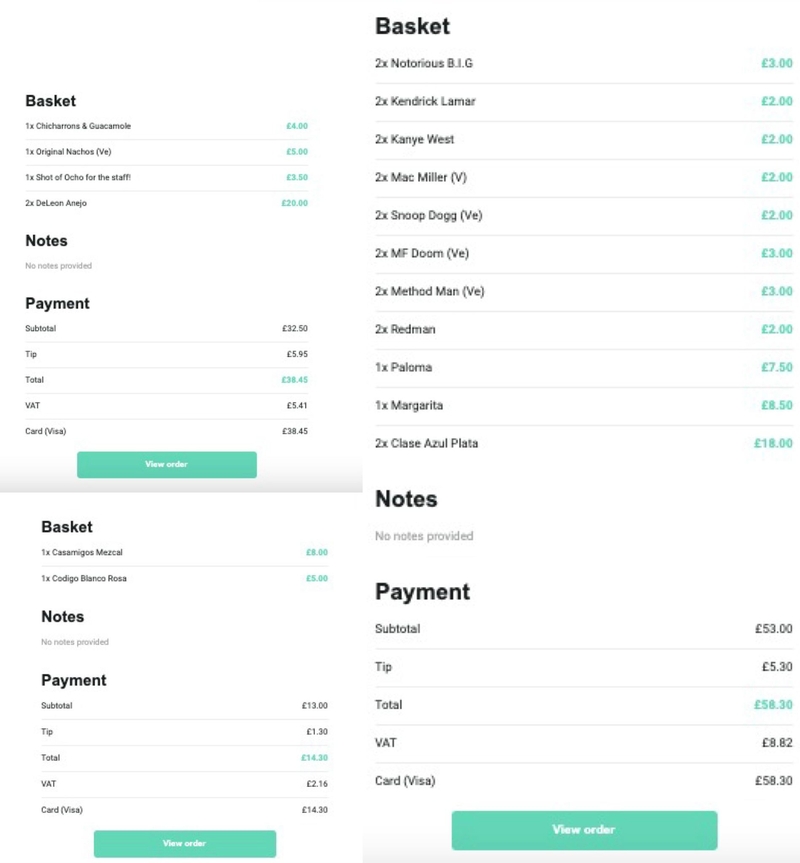