Weekdays, I park in the Arndale car park.  Apparently, it was bought by the council during lockdown. You can tell. Strange things happen when they get involved in commercial stuff. Here, they’ve thrown out the automated ticketing system, replacing it with the usually excellent PayByPhone app used very effectively for on-street parking. They haven’t ironed out the challenges with car parks though.

It sounded iffy to start with, then I took a sniff.

But it does show the human face of Manchester’s one-party, car-hating state as it’s found work for an extra 16 parking wardens. Drivers rejoice!

Let’s not miss out on the hard-pressed drug dealers. Anyone finding themselves running low on weed can now take advantage of the excellent drive-by service operating out of the 11th floor after 5pm.

Gordo’s final tip is for those whose tastes lean toward masochistic humiliation; on the thirteenth floor after 4pm Fridays you can get called a silly old cunt and be told to fuck off by young people in school uniforms. For free!

Recently, in the elevators on the way down to the shopping area I’ve been getting excited watching the preparations for the opening of Slim Chickens, a gift from the good old US of A, situated in between Five Guys, the upmarket (but not much) American burger place and Nando’s, the South African-born chicken chain.

I can recommend the chips at Five Guys, although choosing what to have on a burger takes longer than understanding the Schrodinger’s Cat mind experiment. I go straight for raw tomatoes and sliced onions so I don't dither about and annoy the young men in the queue behind me with all the gold teeth.

Anyway, Slim Chickens is now open and I wanted to go. Recently, my fried chicken joint of choice, KFC, appears to have gone over to the dark side. It’s been a disappointment.

The skin is no longer four millimetres thick and crunchy, riddled with The Colonel’s secret mix of 92 spices and herbs. Which include at least a teaspoon of salt and a good lashing of chicken fat which always dribbled, satisfyingly, down my chin, somehow finding itself all over the steering wheel of the car.

It was what the word lush was invented for.

Not anymore it’s not. Every time I’ve fallen victim to my encroaching dementia and forget just how crap the previous experience was, I’m horrified all over again. It’s like bloody Groundhog Day. Dry, tasteless chicken coated in cardboard.

Don’t get me on the chips. I mean, WTF? That’s been going on since I had my first KFC forty years ago. Only a large pot of The Colonels Chicken Gravy saves them. Mind you, I’m convinced the KFC on Deansgate is watering theirs down.

Back to Slim Chickens where the sun shines all day. They serve tenders (not for me), wings (yes!), sandwiches (think burgers) and shakes. Oh, and “delicious house sauces”. More on these later.

Ordering is via a screen or with a very pleasant young person at the counter. Pay, take a little table-top A-board with your number on, get your drink, take a seat and wait for the food to arrive.

Starting with six wings (£6). Well, one wing and five knuckles - I felt a little cheated - looked good, but no crunch. No skin from what I recall. The sauce was hot, sweet and sticky. The chicken was pre-cooked and re-warmed, I think. It resulted in a strange texture, sort of dehydrated. I was baffled. The sweet sticky sauce covered a multitude of sins.

The fried onions (£3) were not what I expected. There was a bloody great big cloud of them. They were fantastic.

Chips (£0) were better than KFC but not as good as Five Guys. A nice crunch to them, just right for dipping sauces. My favourite of the fast-food brands being McDonalds’ sweet curry sauce.

I was looking forward to the Slim Chickens’ “house sauces” for some chip dipping action. Mango habanero: horrid. Blue cheese turned out to be utterly fucking foul. What about the gravy mayonnaise? Do you really have to ask? It sounded iffy to start with, then I took a sniff. All it needed to compete with the pools of sick on Manchester’s pavements of a Sunday morning were chopped carrots. Coleslaw (£2) turned out not to be thoroughly enjoyable.

The main course, so to speak, was a chicken sandwich with honey BBQ sauce and pickles (£10.50). This included those fries and a drink. I had a coke zero. Oh, that chicken sandwich. I ate a quarter of the bun, half the chicken - a tender apparently. This was a sandwich for the undead. The sweet BBQ sauce matched with pickles was a bridge too far.

I got a bit of a shock when I counted the calories up.

That folks, wait for it, totals 3,570. The average bloke needs 2,500 calories a day [This is perhaps not as clean cut as Gordo suggests, see Anja’s article on calorie counting on menus - Ed]. That meal is more than three times the average portion of fish, chips and mushy peas which come in at around 1100 calories [We are unsure of Gordo’s source for this number so take it with a pinch of salt n' vinegar - Ed].

This chain, imported from the US of A, has been around a while doing its bit for the diabetes epidemic over there.

I’d be giving (not so) Slim Chickens a miss if I were you. 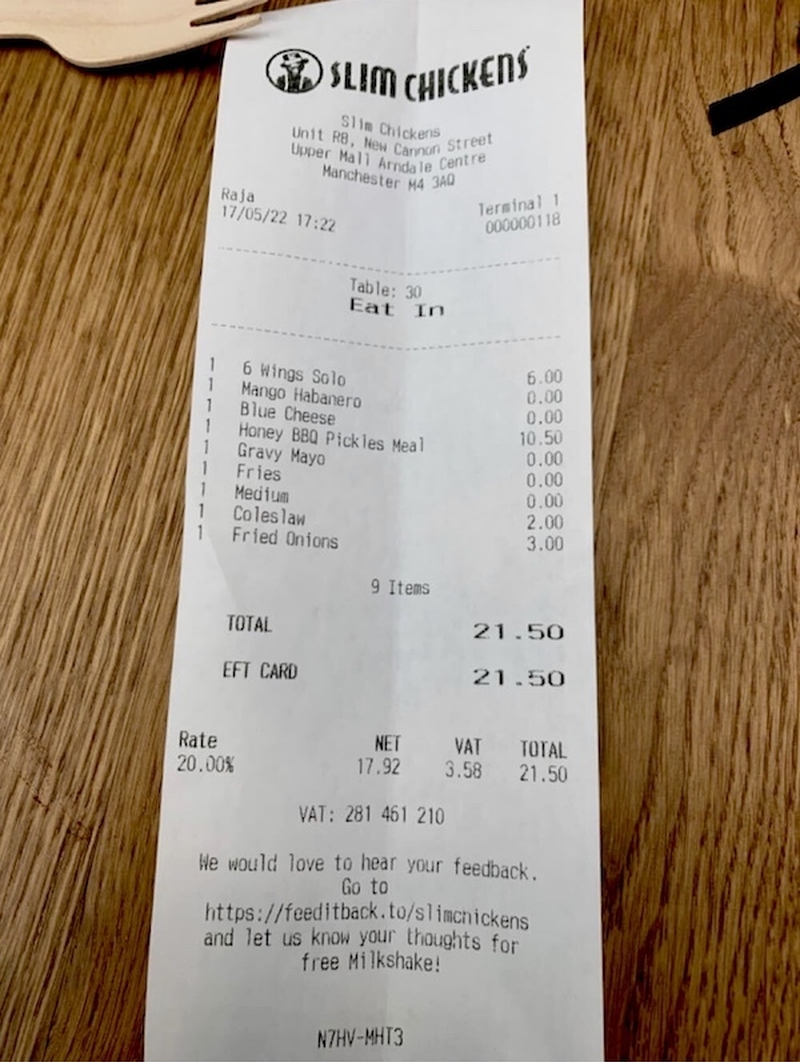