Sleuth is pleased that the enigmatic award winning - 20m album sales and counting - New York musician Moby has endorsed Andy Burnham’s campaign to become the Elected Mayor of Greater Manchester. Moby must have pre-knowledge too. He endorsed the panda-eyed politician fifteen years ago, way before Andy Burnham was standing. Listen to this video from the very first two lines. Andy Burnham is not worried at all.

Sleuth can reveal that Andy Burnham is to face action after it was revealed all his election expenses were used up even before he was allocated any fifteen years ago. This was when they were used to pay Moby to write his election campaign anthem. He's a bit worried now. Something like that, if any of it were true.

In one of the surprise re-fits of recent times the refurbishers went to work on shabby old O’Shea’s sports bar on Princess Street. You can now sit with your stout and watch the hurling in comfort. As part of his new Manc/Irish fusion menu, Robert Owen Brown went to work on an egg, the O'Shea's Egg. Gone is the black pudding wrapped around the hard-boiled egg. In its place, a mix of ham hock and cabbage, rolled in a combo of breadcrumbs and Tayto crisps before deep-frying. What makes it Irish apparently is the cabbage and Tayto crisps. Best washed down, Sleuth feels, with a chaser of Drumshambo Gunpowder Leitrim gin from an Irish spirits list dreamt up by Father Dougal McGuire. Sleuth surprised everybody after five of those by joining a Riverdance with some likely lads and lasses. People were shouting 'Fire the Flatley fella, you're finer by far' and 'Go on, do that really shit Irish accent for us once more!' And Sleuth replied, 'To be sure, to be sure, top of the morning, feck, to be sure!' And was thrown out. 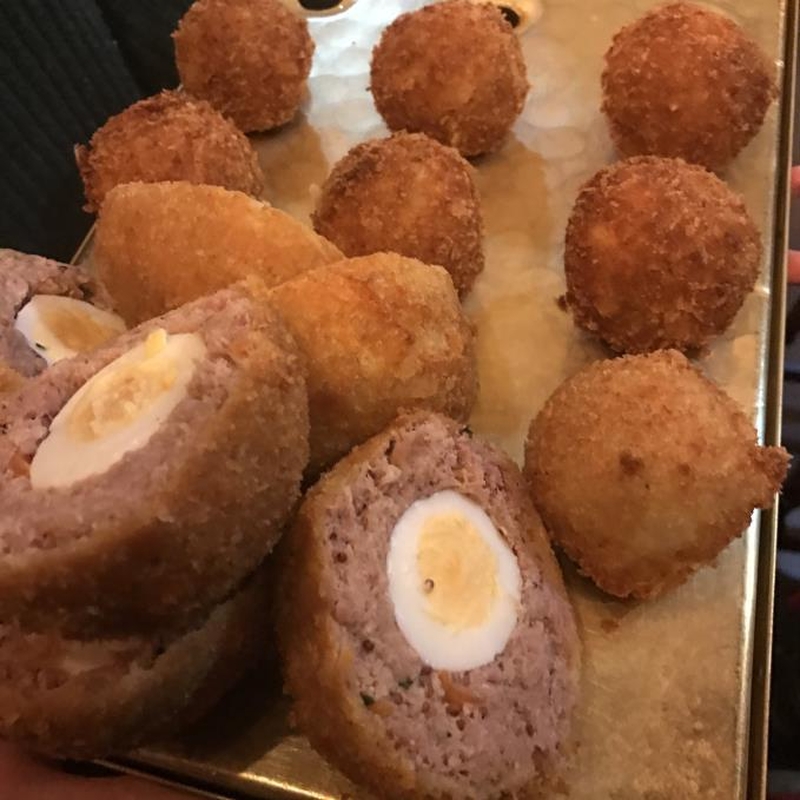 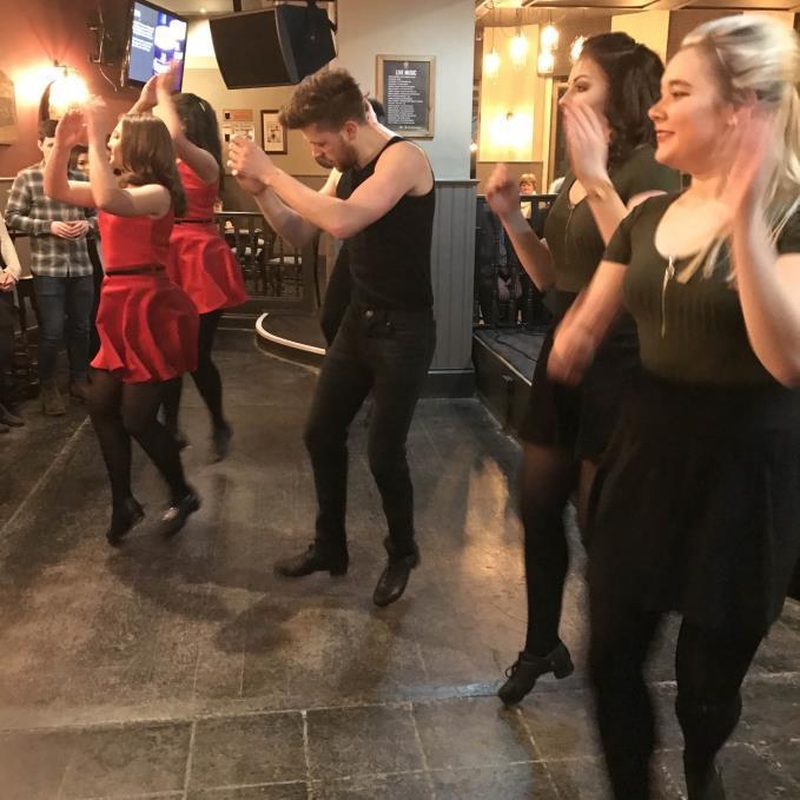 THE BEARD: A 3D ARTWORK

The O’Shea’s bash had its share of VIPs, including council leader Sir Richard Leese and ex-Arsenal and Everton striker Kevin Campbell, although Sleuth isn't sure why the latter was there. Maybe he likes eggs. Maybe Owen Brown is in the process of creating an Everton Egg. There was art too. Sleuth was very taken by the installation called The Beard. This has been an on-going project of several years standing for Chris Horkan, editor of Manchester Wire. Sleuth thinks he's cheating though because Horkan doesn't even brew Craft Beer. Still my-oh-my, The Beard caused a proper hair-and-froth mess when that first Guinness appeared. Sleuth didn't know where to look.

Sleuth read Confidential’s article on Fable opening this year in the old Masonic Hall on Bridge Street with interest. It’s 'Pan-Asian' and ‘high-end’ as well. Sleuth is worried. He’s becoming barricaded in by 'high-end Pan-Asian' restaurants. The Rabbit and the Moon opened recently on top of Urbis, Grand Pacific by Living Ventures opens in the old Reform Restaurant space in King Street next week, there’s Menagerie over the river from Fable, Australasia up the road, as is Sakana, and Tattu is round the corner. "Pan-Asian might become pandemonium, if we’re not careful," Sleuth said in the office to howls of laughter as he once again carried away the crown of the Funniest Sharpest Northerner for the seventh year running.

SLEUTH'S DOUBLETAKE OF THE WEEK

Sleuth had to re-read this sentence about Fable restaurant (see above) in our story: 'A DJ booth will be installed on a pulpit stand behind a specially designed sculpture of a hand holding a giant carp'. Sleuth misread that last word and exclaimed, 'Urgh!' Then he re-read it. Care will have to be taken in press releases Sleuth thinks. Nobody wants a hand holding a giant crap in a restaurant.

HOW TO RUIN A GOOD HEADLINE

The MEN ran a headline about the Economist’s proposal to move the capital to Manchester (see our story here) which read Should Manchester be Britain’s Capital? It was an interesting piece and very positive about the city but wait, thought Sleuth, what's this and this and this and this. Shouty links led the reader to: ‘Horrific moment woman is dragged across the street as she fights thug attempting to steal her handbag’; ‘Two pensioners charged in connection with allegations of historical child abuse’; ‘Councils across Greater Manchester rubber stamp £160m of cuts’ and the piece de resistance; ‘Blind man tasered by police after his walking stick was mistaken for a gun’. It was schizophrenic, like being at bar with a thoughtful friend on one side and a screaming lunatic on the other. The computer-generated interventions (Sleuth assumes) in such a positive story left Sleuth with one distinct impression. Leave the capital city where it is for God's sake, it's just too mad and dangerous in Manchester - well according to the MEN at least.

SLEUTH'S OVERHEARD CONVERSATION OF THE WEEK

Pompous man in the Hilary Step in Whalley Range, going on about art and culture says, "I saw King Lear at the Nottingham Playhouse you know." Man to his left says, "He's still going, is he?"

Sleuth was at the MWH Global Water Resources Engineering event this week in the Great Hall of Manchester Town Hall. The old place looked splendid with roving colours, spots, pretty patterns and...er...football tables and pool. The event was informal you see and people were encouraged to relax. Sleuth was the guest speaker. He'd been asked to talk wittily about Manchester Firsts - its pioneering achievement. The audience laughed in all the right places but went truly wild when Sleuth dropped the line, "And in your field of expertise Manchester developed the Activated Sludge System." There were whoops and claps, shouts of "Bravo!" Sleuth reckons this is the first time the announcement of a 1913 method of bacterial sewage disposal has ever been received with such enthusiasm. Another Manchester First. Still Sleuth regrets not speaking from 'a DJ booth installed on a pulpit stand behind a specially designed sculpture of a hand holding a giant crap'. 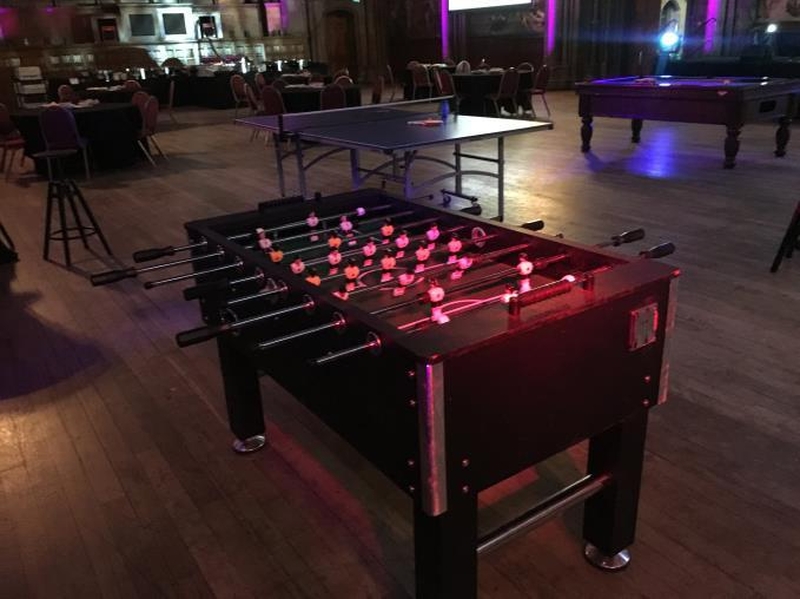