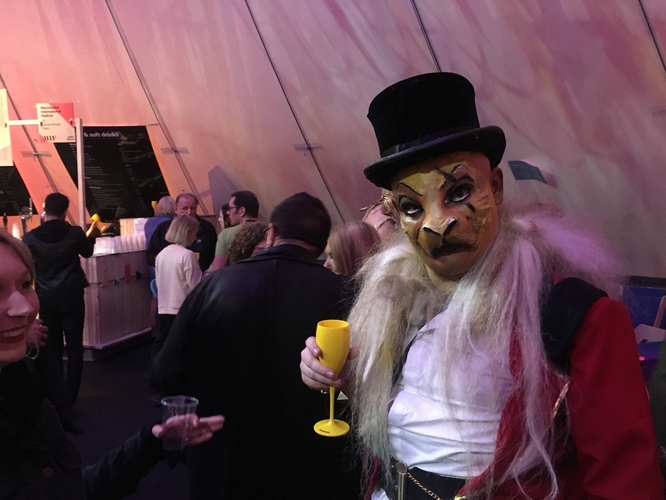 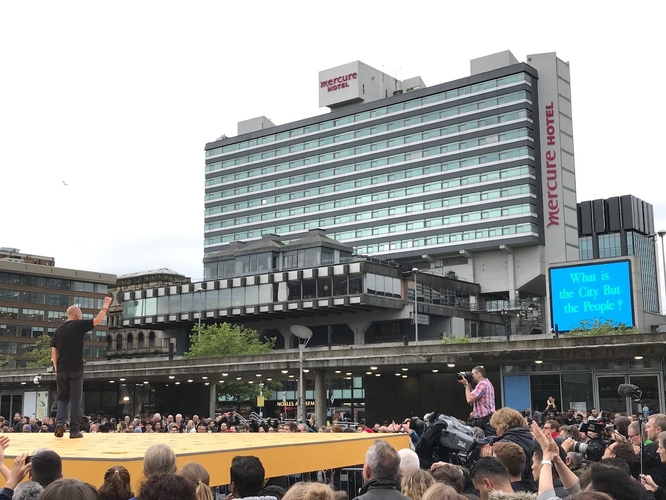 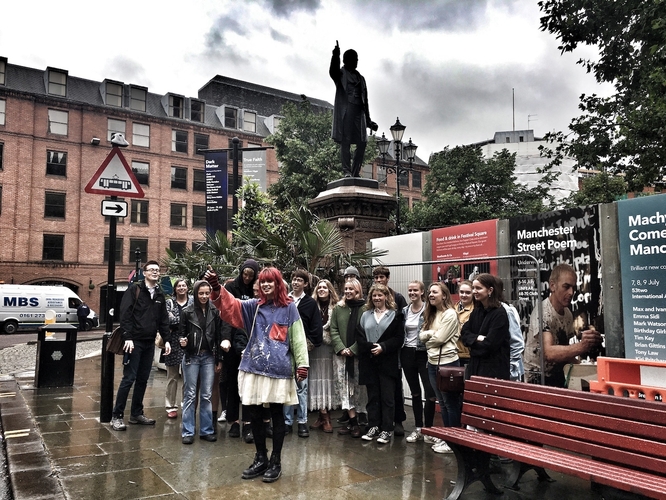 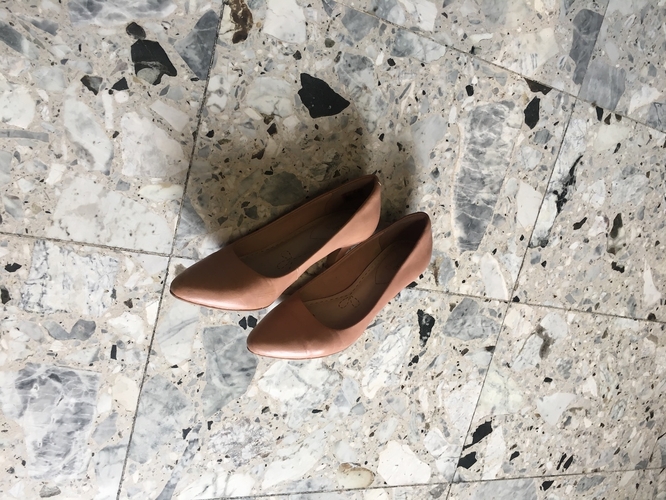 Week 26: in which Sleuth bags a Gladstone and Gordo sulks

TOWERING OVER THE FESTIVAL: PART ONE

Sleuth attended Thursday’s lovely Manchester International Festival (MIF) launch with Jeremy Deller’s What is the City but the People. Sleuth sort of fell in love with 100-year-old lady and former army ambulance driver, Mickie, who walked the catwalk in Piccadilly Gardens. The dancing kids were a treat too. And so was Helen Darby from MMU. Bez was his usual court fool of Manchester, but that’s life. It was odd to see the developer and planning department’s go-to architect Ian Simpson strutting awkwardly above the crowd. Simpson designed Beetham Tower and lives in the empire-sized duplex on the top. Sleuth’s friend said, “Surely it would have been better if he’d been dressed as Beetham Tower with a little cut-out for his face.” Sleuth couldn’t agree more.

Sleuth decided that standing on saturated grass in Piccadilly Gardens for What is the City but the People was harming his brogues. So he went to the bar in the Mercure (Piccadilly) Hotel and watched the proceedings from on high with a drink. Cunning. Then he started getting similar messages. The first was from Mark Kennedy of Afflecks Palace mosaic fame. ‘That’ll be the end of the recently re-laid grass in Piccadilly Gardens then.’

Though Sleuth had to feel sorry for council cheerleader and Manchester Day organiser, Councillor Pat Karney, who, having finally got himself two minutes in the spotlight, ruined it all by downing too much tea beforehand. Run Pat! For god sake man, run!

TOWERING OVER THE FESTIVAL: PART TWO

Sleuth later spotted Simpson in Festival Square, perched above party-goers on a raised glass platform. Out came Lancashire’s former Michelin star chef Paul Heathcote, now involved catering MIF, who, spying Simpson up top, called out: “Just how you like it Ian, tall and behind glass.” Sleuth’s no idea what Heathcote is talking about...

SLEUTH AND THE PIG/CAT MAN

Sleuth went to the launch party of Manchester International Festival and partied like it was the end of world. He talked to everyone until they ran off scared. One man didn’t run away though. “Personally I’m making a pig of myself,” said Sleuth's new best friend, cattily.

Sleuth was taking a group of lovely young people from Bedales School on a tour of Manchester. He got talking to one of the students and she said her name was Mina Gladstone. “Not related to William Gladstone, four times British PM are you?” joked Sleuth. “Actually, yes,” she said, “I’m his great great great granddaughter.” So in Albert Square, under the statue of the William Gladstone, aka ‘the man hailing a cab’, Mina Gladstone re-enacted the pose of one of the greatest statesmen these islands have ever known and the other students laughed and laughed.

Last weekend, Sleuth was in Cathedral Square, the scene for the city’s first ever festival devoted to la dolce vita. 26,000 people turned up at Festa Italiana to eat, drink, watch the band, wear Limoncello hats and Aperol Spritz sunglasses and see Italian people cook and be Italian. To be nice, the organisers also invited a chef from nearby Cafe Football. Misunderstanding the brief, they announced they were sending none other than Johnny Cash. The audience turned up the next day disappointed to discover that the line-up had changed, once organisers realised that deceased country singers can't make a decent risotto and that Ring of Fire isn’t a spicy Sicilian dish.

Sleuth was watching Confidential’s Gordo up against Maurizio Cecco, boss of the Salvi’s restaurants, at the festival. They were in a cook-off over the perfect ragu. Gordo had been cooking his sauce for 17 days so by the time of the event all he could do was gently stir his grub and shower sarcasm around the marquee. Four members of the audience judged the finished products and Gordo lost 3-1, even though Sleuth has to admit his ragu was mighty fine. Gordo then sulked.

Eventually Gordo sulked himself into a breakdown, which manifested itself into a number of perplexing symptoms, such as wearing a top hat with Lady Gaga sunglasses (over reading glasses) and little girl's socks under tennis shoes. Funny thing, the mind.

This is Gordo. Gordo is our publisher. Gordo wears a top hat with tennis shoes. Gordo is weird pic.twitter.com/cP63WYD8Jv
— Mcr Confidential (@mcrconfidential) June 30, 2017

While Gordo was sulking, a large man approached Sleuth in the marquee. “Is there any free food left?” he asked. “No,” said Sleuth. “Is there any free beer left,” asked the man. “No,” said Sleuth. The man looked at Sleuth and said, “I just wanted some comfort, you know. My wife left me for a midget two nights ago.” Sleuth had nothing to say to that. “I never thought she’d stoop so low,” said the man and disappeared out of the marquee.

BISHOP BASHING ON A SATURDAY

Sleuth met a friend at Hanging Ditch Wine on Saturday. As he passed the Cathedral he noticed huge numbers of people had spilled out of the building. They were wearing some impressive kit. “What’s going on?” asked Sleuth. “Lots of vicars have been ordained today,” said a nice gentleman. “That’s an elaborate outfit for a vicar,” said Sleuth pointing at a mitred man. “Oh there’s been the ordination of bishops too,” said the elderly chap before adding, innocently, “Those bishops love a proper bash.” Sleuth walked away giggling like the small child he is.

SHOES ON THE RUN

Sleuth at about 6pm on Saturday was in Victoria Station. In the buffet there were a pair of elegant lady shoes. They sat there all neat and lonely as Sleuth slurped a pint. They never moved and nobody came for them. Maybe they are still there. 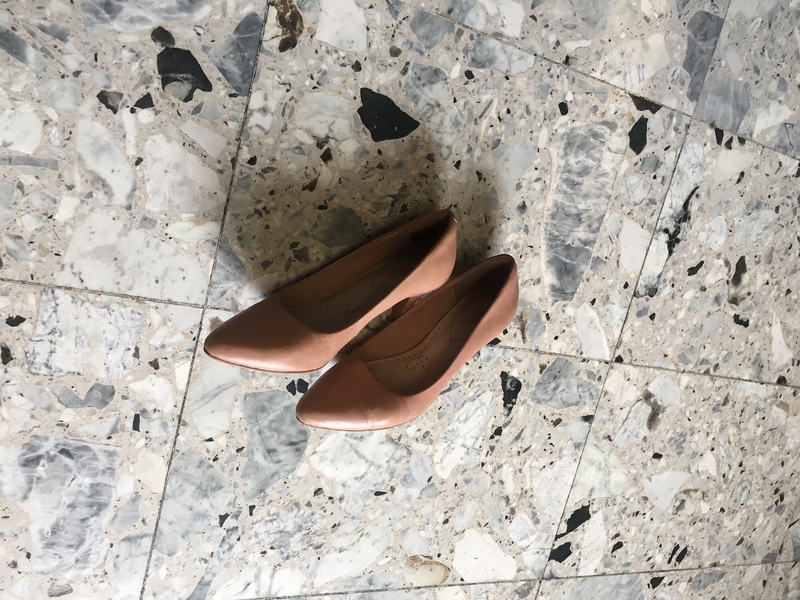