Sleuth is often taking little strolls up the Irk valley and Angel Meadow behind Victoria Station. There are some curious things to see and good views. Then there are these signs on a garage up there that always makes him smile. Could any teacher having problems giving good apostrophe instruction kindly bring your kids here in a masterclass of how not to do things. 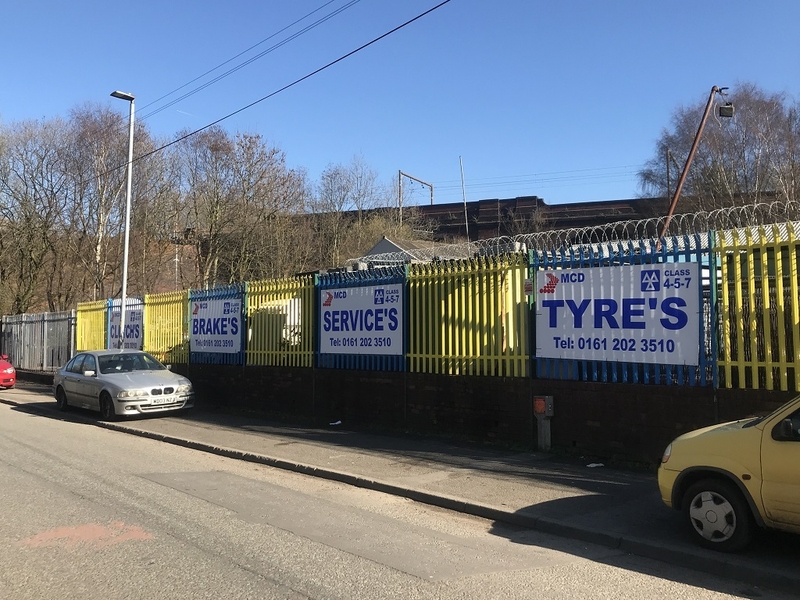 Sleuth was charmed by this A-board advertising the skateboard wares of the Black Sheep shop on Dale Street. Drollery is always a winner. 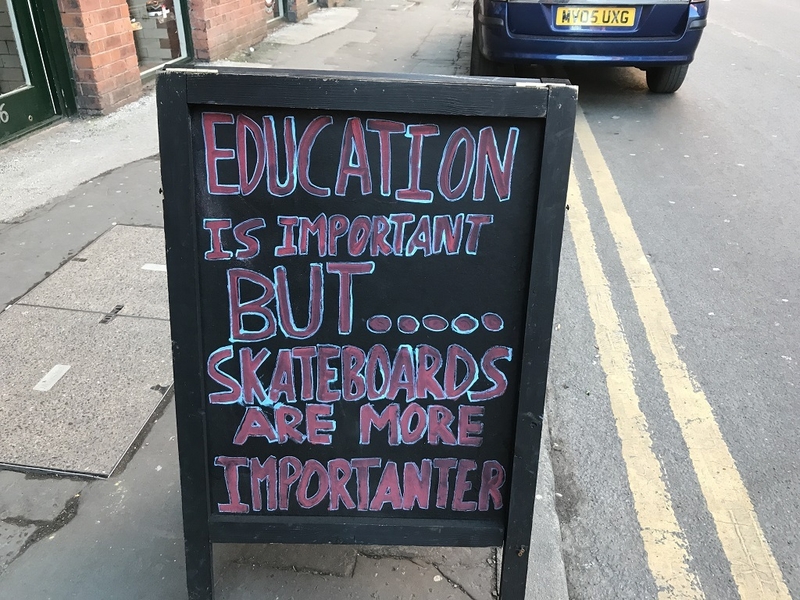 The Factory is off... kinda

Sleuth was sent a progress update on The Factory this week. Yes work on the game-changing new multi-million pound arts centre is finally underway, and to prove this they sent Sleuth a time-lapse video showing how far they'd come.

Thing is, Sleuth watched the video for two and a half minutes and not much happened at all. A few diggers moved above, some gravel went there, bit of muck there, a crane swung around. Sleuth thinks in the great pantheon of timelapse construction videos, it should win the award for 'Least Actually Constructed'... or maybe just 'Most Boring'.

Sleuth doesn't recommend you watch all of the video, you get the gist after ten seconds or so...

Sleuth heard a funny story about an eminent Manchester architect this week. Sleuth's told the architect, on a jam packed train from Leeds to Manchester, had a bit of a strop and huffed and puffed at a young mother with a pram who was blocking his way to the first class carriage. The young mother, unable to move and unwilling to shrink herself, her baby and the pram, told the architect that he'd have to get off the train and walk to the other end of the first class carriage, as she wouldn't budge. Which he did, unwillingly. Good for her, thinks Sleuth. Though he does wish she'd remarked "And on the way, watch you don't fall down... like your buildings." 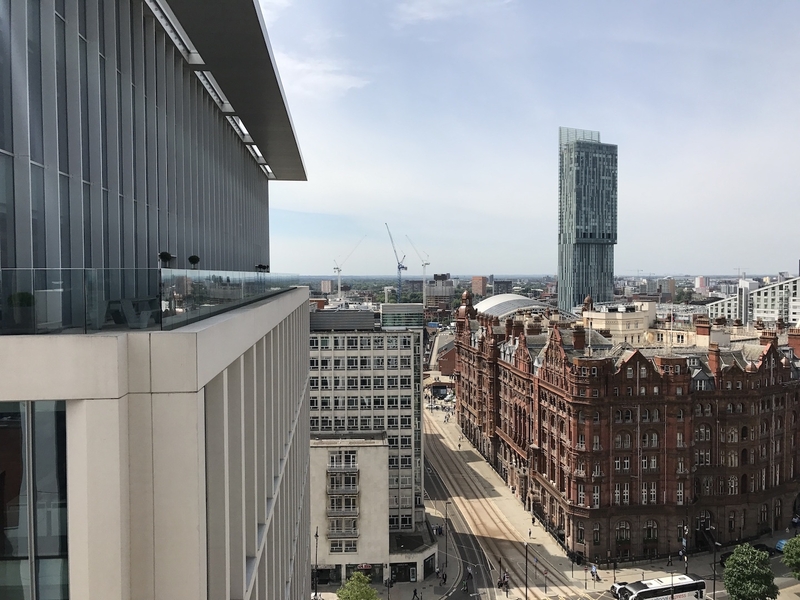 Sleuth, in the recent lovely weather, cycled out west from the city and stopped for refreshments at the Boothstown pub, The Moorings, by the Bridgewater Canal marina. He likes some of the regular events coming up but thinks Tuesday's offering might attract the wrong crowd. The out and out trolley winner 2019

On that same cycle ride, Sleuth was bemused by how this shopping trolley got up a tree, on the inaccessible far bank of the Bridgewater Canal miles from any shops in Trafford Park. It’s too early for shopping trolleys to be nesting, after all. Anyway, Sleuth doesn’t think organisers of the 2019 Imaginative Shopping Trolley Disposal Awards need to look any further for a winner. Sleuth was with Gordo in Tast on King Street. It was Gordo’s review treat, the £135 tasting menu in the fine fine dining restaurant on the top floor. Fifteen courses with standouts such as tuna and sea urchin with caviar.

“This is amazing but have you not finished decorating yet?” asked Sleuth, pointing at the canvas free picture frames.

“No, that’s part of the design?” came the answer. The publisher and the editor at large

Ego tickling for Gordo, the publisher, and Jonathan Schofield, the editor at large, this week. Gordo, or perhaps Eric Morecambe, was commemorated by a mosaic, and Schofield in a sketch. The first is clearly cracking up and the second is making a cartoon of himself as usual. Not wanting to be left out, the editor, David Blake, created the third cartoon impression of himself. Bless. 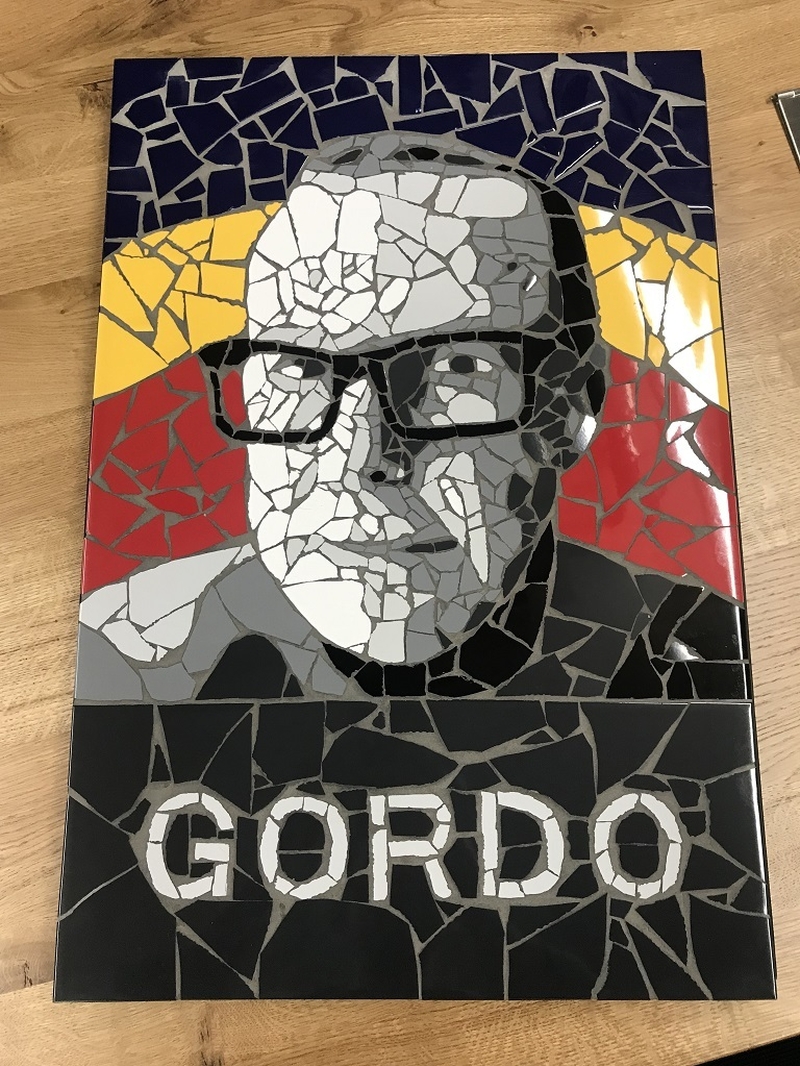 Behind the head of Gordo in the mosaic above there’s the Confidential branding of a blue, yellow and red roundel. Sleuth was sloshing beer in the City Arms when he saw that the Romanians were opening a consulate on Cooper Street and something looked very familiar. Well, it’s outrageous, Romania has clearly copied the Confidential logo – scramble the airforce, send in the tanks. 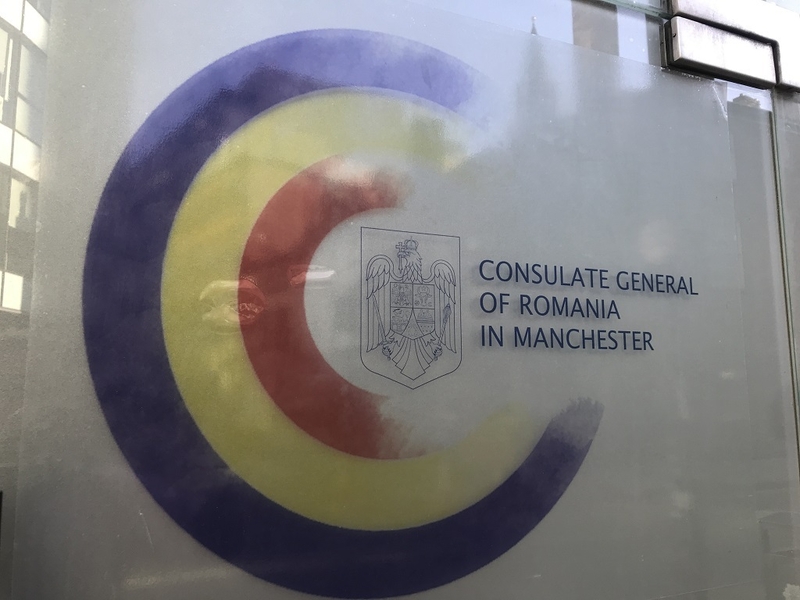 Canal plug (careful how you say that)

Sleuth was taking the canal shortcut from Rain bar to Castlefield when he saw on the Rochdale Canal towpath an arrow. He looked down the canal wall and there was a chain. Chains always need pulling. Sleuth pulled it. Oh dear. Suddenly all the water in the canal ran away. Turns out he’d pulled out the 215-year-old plug that covers the drain from the canal into the little River Tib below. Sleuth put his hands behind his back and walked away nonchalantly, whistling, assuming an elaborate but skilful air of innocence. A friend of Sleuth got in touch last week about a tree that was annoying people in Prestwich. The tree in a front garden on Haywood Road is painted entirely sky blue and nobody knows why, so Confidential put it out on social media. Suggestions ranged from the owner being a Man City fan trying to get up the noses of Reds to something in Australia called the Blue Tree Project - an environmental art project. After some speculation the owner got in touch (see below). Thanks Mike. We can all sleep easy.