A menu that changes every six weeks, a six-course tasting menu for £29 and a launch menu inspired by the British tradition of ‘chippy tea’…Six by Nico Manchester certainly does things differently.

Opening today on Spring Gardens, the 64-cover restaurant marks acclaimed chef-founder Nico Simeone’s first foray into England and the fourth Six by Nico; which was born out of a passion for experimenting with new ingredients and creating unique dishes back in 2017.

Reservations for the new Manchester restaurant are already surpassing 3000​

Six by Nico also operates in Belfast, Edinburgh and Simeone’s hometown of Glasgow - where he was born to Italian parents in ‘a family of Mediterranean foodies.’ His colourful career has included stints at Michelin-starred Number One at Balmoral, where he was awarded Young Scottish Seafood Chef of the Year at 20, and working at Brian Maule’s acclaimed Chardon d’Or.

As with its UK siblings, Six by Nico Manchester will serve up a brand new six-course tasting menu every six weeks - each themed around a different place, memory or idea. Future themes will be kept a surprise, with new menus published just two weeks before launch.

It’s Six by Nico, however, that’s really taken off. With tasting menus just £29 (and accompanying wine flights available at £26), its accessible brand of innovative ‘fine dining’ has unsurprisingly proven popular, with reservations for the new Manchester restaurant already surpassing 3000. 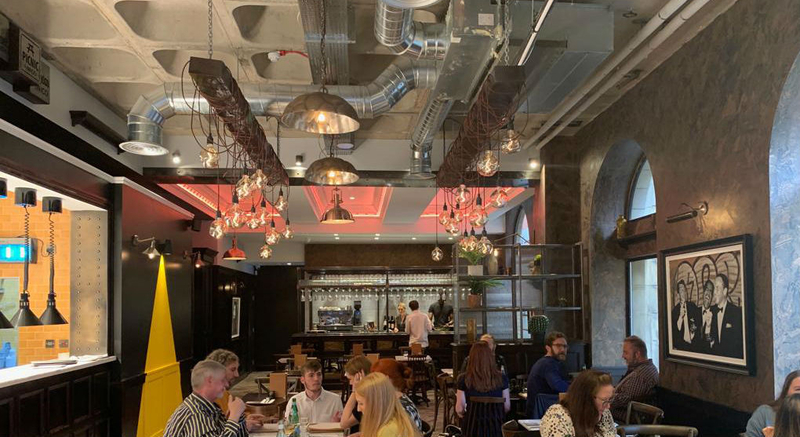 As for themes, Simeone tells us he gets inspiration everywhere from travelling to films: “I even ended up creating a menu based on the movie Inception once!” Menus have spanned Thai street food to Picnic and Childhood.

So what’s next for Six by Nico? “I’d like to open in London or Liverpool next, perhaps even at the end of this year. But I don’t want to open too many and lose the personality; those two cities would probably be enough, especially as I make sure to give each restaurant my time. I’ll probably spend two days a week now in Manchester.”

Finally, why here? “I often used to visit with my wife before the restaurant opportunity, and just love the city - I’m looking forward to seeing the reaction from our diners. Six by Nico is a totally different dining experience and I hope that people will leave having had an unforgettable meal.”