Earlier this month, Kellogg’s announced it had teamed up with Salford brewery, Seven Bro7hers, to turn its rejected Kellogg’s Corn Flake into an IPA – and the story has since been picked up by national and international newspapers and media sites.

‘Throw Away IPA’ is made from ‘ugly’ Corn Flakes from the Manchester cereal factory - who moved its UK headquarters to MediaCityUK in January 2018. These unwanted flakes are considered perhaps too big, small or overcooked - and therefore have not passed Kellogg’s strict quality control.

the amount of attention and global media interest has been amazing

The non-sellable cereals have in the past gone on to make animal feed, but the breakfast specialists are keen to seek out new opportunities to upcycle their food waste, so approached local brewery, Seven Bro7hers, about the prospect of a special cereal brew.

The pale ale – which was perfected over 14 days in the brothers Salford brewery – uses 60kg of Kellogg’s Corn Flakes to replace some of the wheat grain in the beer mix, during the ‘mash’ process the cereal sweetens the taste.

Speaking at the beer’s launch at Kellogg’s HQ, Kate Prince, ‘corporate social responsibility manager’ for Kellogg’s UK, said: “Kellogg’s is always exploring different and sustainable ways to reduce food waste in its factories. So it is great to be involved in such a fun initiative with a local supplier.

“Kellogg’s is working hard to eliminate food waste in our manufacturing processes and give our consumers the wholesome products they love with minimum impact on the planet. Our approach has delivered a 12.5 per cent reduction on food waste in our UK sites this year.”

The seven brewing McAvoy brothers; Guy, 57, Keith, 50, Luke, 45, Daniel, 44, Nathan, 42, Kit, 37, and Greg, 35, started their brewery in 2014 - inspired by their dad’s home-brewing efforts in their cellar over the years. Their Seven Bro7hers Brewery has been a huge success over the past four years, and in March 2018 their sisters decided to get in on the act starting their own distillery, Four Sis4ers Gin.

The eleven siblings believe they are the biggest single family in the alcohol business in the world.

News of the partnership was subsequently reported in various hospitality and trade publications before being picked up by The Metro and Daily Telegraph newspapers. Word then spread across countries and even continents with stories appearing on websites based in the USA, Canada, Australia and New Zealand.

“We knew this was an interesting partnership and would provoke public interest,” says Alison Watson, spokesperson for Seven Bro7hers, “but the amount of attention and global media interest has been amazing.”

What exactly was it about the story that caught people’s attention across the world?

“Food waste and upcycling is a huge concern to most businesses and also the public,” adds Alison. “We do not think most people are aware that cereal can be used in the ingredients to make beer. 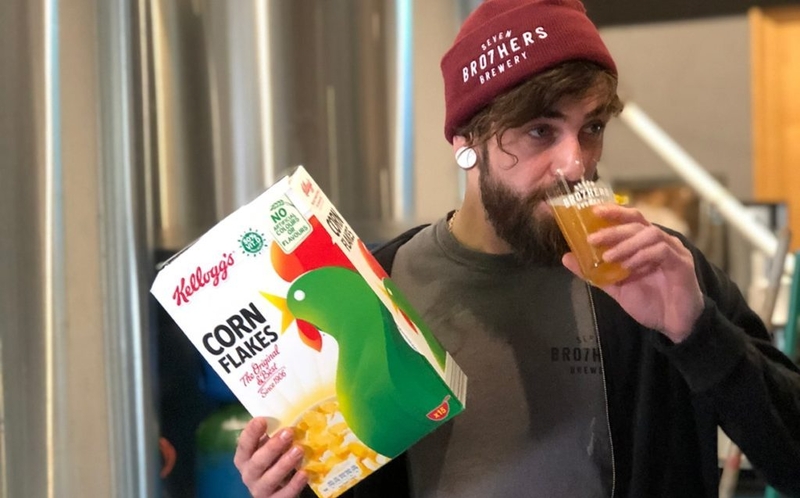 Will the brewery be considering further collaborative projects with other businesses in future - either with or without an environmentally responsible focus?

“We are always looking to collaborate with other local businesses,” confirms Alison, “whether that be another brewery, manufacturer or musician and if within this we can give a positive message then all the better.”

The idea has proved so successful that Alison confirms they are already working on further new beers using upcycled Kellogg’s cereal. “We plan to create three beers including a Hoppy IPA which will be launched this month and sold in our Ancoats bar and the Dockyard, MediaCityUK.”

The limited edition ‘Throw Away IPA’ will be sold across Manchester in Seven Bro7hers Brewery hangouts and stockists, with 10p from each can purchased being donated to food distribution charity FareShare.