Sailing off into the sunset…

Here’s an idea to get on board with – a trip that’ll really float your boat!

FANCY experiencing Manchester from a new perspective? We did, so one night after work, we headed for the Ralli Quay in the city centre’s Spinningfields and hopped on board a boat for a trip along the waterways with tour operator Manchester River Cruises.

Once we’d got settled in our booth, specially selected wine and locally brewed craft beer close at hand to help us find our sea legs, the purpose-built Dutch-style sightseeing boat Princess Katherine cast off and we set sail for Salford Quays. 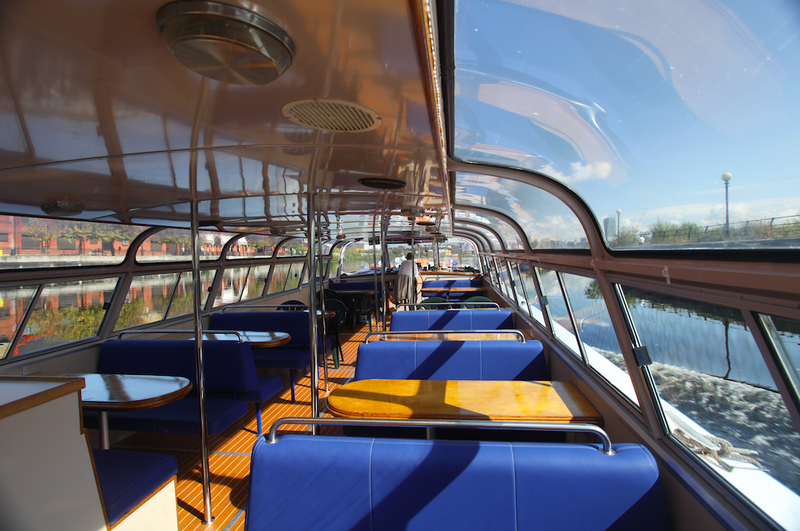 Drifting down the River Irwell and letting the usually unseen banks and inlets float by is good for the soul – and the mind. Port side, we spot the entrance to what was the Manchester & Salford Junction Canal, with its lock and lifting bridge – it originally wormed its way underground to the basin near Bridgewater Hall. Starboard side, the remnants of the Manchester, Bolton & Bury Canal closely followed by Wilburn Basin, now enclosed by luxury flats.

It’s the perfect backdrop to some of the best sunsets where you’d least expect them (Salford) – and you’re in the perfect place to see them, bobbing about in a boat.

There’s lots of heritage to be had, especially on the travel-related front. We get our very first glimpse of Stephenson’s Bridge, built in 1830 by ‘father of the railways’ George Stephenson. Forming part of the world’s first modern railway, it has just become visible again after 150 years being hidden away – following the opening of the Ordsall Chord, linking Victoria, Oxford Road and Piccadilly stations. Once we get down to Salford Quays, there’s the disused dry docks to see and the Mode Wheel Locks, which lift (or lower) boats vertically by 13 feet to make up the difference between the sea level height of the Manchester Ship Canal and the Salford basin. 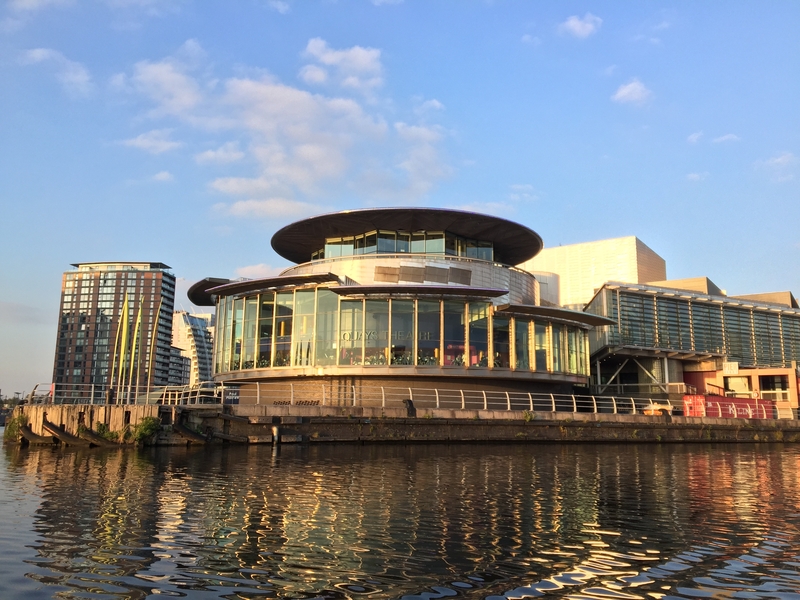 In contrast to all the history, there’s plenty of dramatic modern architecture to look at, from the Daniel Libeskind-designed Imperial War Museum North and the ever-expanding MediaCity campus, to The Lowry arts centre and Man United’s Old Trafford home. It’s the perfect backdrop to some of the best sunsets where you’d least expect them (Salford) – and you’re in the perfect place to see them, bobbing about in a boat. 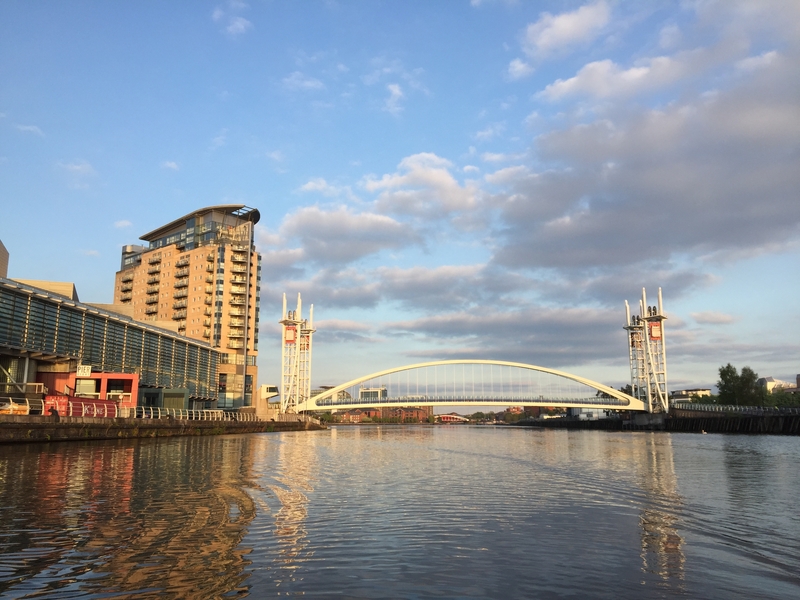 Of course, your night out with a difference wouldn’t be complete without a tipple or two from the well-stocked bar and a tasting board of cheese, meats and some true Northern nibbles (think along the lines of lip-smacking Scotch eggs and finger-licking pies) from local supplier Beehive Food. And to complete the relaxing two-hour evening trip, being welcomed back into the city centre is just gorgeous with the twinkling lights reflecting off the calm surface of the river. 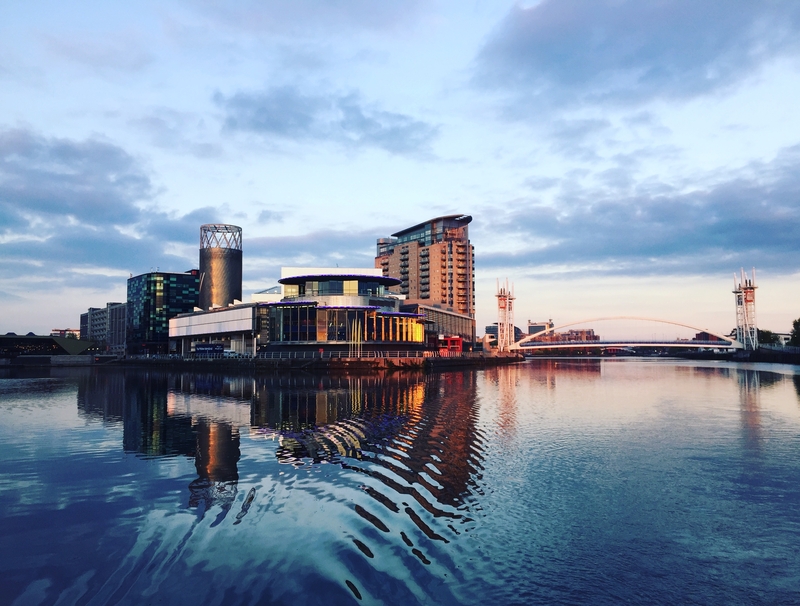 For added sparkle, you can combine your cruise with canapés and cool Rat Pack vibes from singer Russell Shaun on the regular Swinging On The River trips, or sign up for a Just The Girls Prosecco Party – the next is on Saturday 7 July.

Sounds right up your, er, street? The Evening Cruise With Tasting Board is just £20 per person. Find out more about the various evening and daytime trips available through Manchester River Cruises and book your place here. 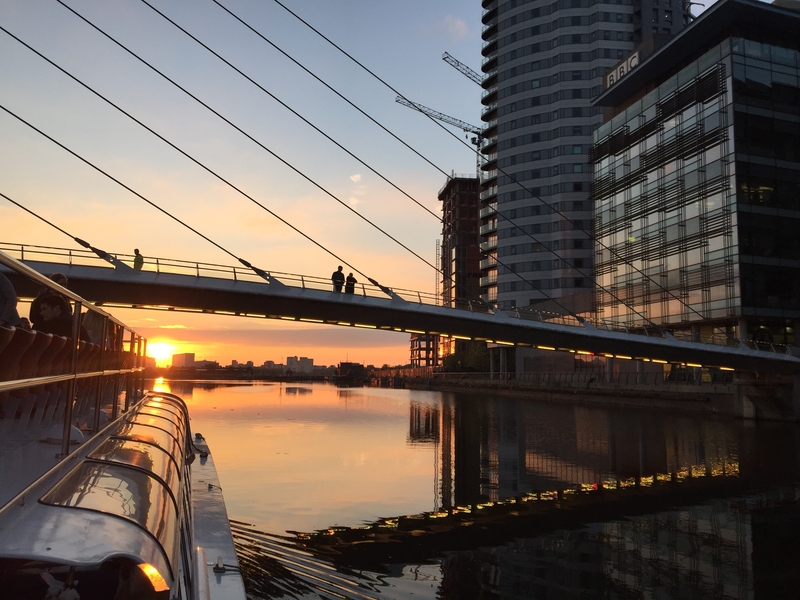