A pub grub upgrade - but at what price?

The history of the Black Friar is almost tailor-made for some kind of morality play about gentrification vs regeneration. Who can afford what and why? It started life under its current name in 1886, though it is believed there was previously another pub on the site. For decades it was a classic Salford boozer until a fire seemingly consigned it to history - just another derelict pub.

Then Fred Done, who has nibbled his way into the Sunday Times rich list due to his bookmaking firm BetFred and development company Salboy, decided he wanted to develop the area, building the kind of flats he could rent to a new breed of Salford resident who worked in tech or social media or design.

The Black Friar could have posed a problem, being Grade II listed. A few years ago an unscrupulous developer might have addressed this by letting the building become so dangerous there would be no choice but to tear the whole thing down. Thankfully these days, a building like The Black Friar is an asset. Done decide to turn the pub into a kind of living room for his tenants, who, one presumes, have the kind of disposable income to take £17 for fish and chips in their stride.

I visited the Black Friar twice, once for a drink in the sunny beer garden and once on an utterly depressing rainy evening. The first time we had a couple of snacks from the grazing menu and idled our way through a bottle of Mencia (£50). Apart from the noise of the ring road and nearby building sites, it was more Spanish terrace than Salford. The second time, with heads retreating into dark hoods to protect against the downpour, we looked like a couple of modern-day black friars ourselves.

The pub itself bobs along like a brave tugboat pursued by the two ocean liners of Done’s development. The scale gives The Black Friar a dolls house feel despite being a solidly handsome red-brick Victorian building. The bar area is cosy and the furnishings contrive to look as if they have been there forever with comfortable elegance. A bottleneck of a bar leads to a more modernist glass restaurant with Bridget Riley-esque tiled floor and lashings of local artists on the wall.

When I visited in those halcyon sunshine days at the end of September my friend said it looked like an influencer’s flat (I think he was referring to the nursery’s-worth of plants) but it definitely has a dash of Monocle about it. In winter, the rain casts gorgeous glittering effects on the glass but the edges seem harder too.

But enough of the interior design critique, let's get to what this is really all about - the food. Aidan Byrne was originally lined up to take command of the hobs, but pulled out over the pandemic, deciding to concentrate on his Church Green in Lymm. A comrade from that pub and 20 Stories, Ben Chaplin, has stepped in and taken those establishments’ focus on glamorous yet accessible favourites and tweaked the fine-dining dial up a notch or three.

A starter of seared red venison loin (£14) came with a scattering of blackberries, frondlets of cavolo nero and pickled salsify. I didn’t find the advertised liquorice so assumed it was part of the painterly brushstroke of sauce that swept dramatically down the side of the plate. It was gorgeously autumnal, though the delicate and tender venison was in danger of being overwhelmed by the more rowdy flavours on the side.

My own starter of cep gnocchi (£11) was another lovely portrait of the earth’s bounty as it treads its vernal path. Plump confit artichoke concealed even plumper gnocchi, which seemed to have lost a bit of definition in the cooking but the tiny mushrooms more than made up for it.

As for the mains, a dish of "Cumbrian pig" (£26) was a solid choice, with the oinker served three ways – belly, fillet and cheek complemented by celeriac and mustard – the kind of good hearty fair the potentially mythical Black Friar himself would be happy to give thanks to god for.

The monkfish osso buco (£29) was something I’d been dreaming about ever since I cast my greedy eye over the menu. Osso buco is traditionally made by slow cooking veal shanks but was co-opted by the venerable fish restaurant J Sheekey. Monkfish is very robust so can stand up being treated like a piece of meat (literally) but still, there is something enticing about seeing such a heavy and hearty dish using fish.

Black Friar’s take on osso buco is served with pancetta and onion mash. The first few bites were wonderfully rich, the pancetta crisps delivering smoke like bonfires smouldering in bare fields. However, someone had had a very generous hand with the seasoning. I’m a gal who likes her salt, but this would have a Scottish sailor reaching for a glass of water. The fish itself had kept its meaty texture but I couldn’t finish it.

After that, I found it difficult to get excited about desserts. I didn’t touch the cheeseboard (£12), even though it came with its own terrifying cleaver, which honestly would be more at home on the set of a slasher movie. On the plus side, there was a generous amount of crackers.

Instead, I picked at a tiny mouthful of the bitter orange parfait (£8) with olive oil cake and yoghurt. And then I had a little more. Then a proper mouthful. My taste buds were suddenly skipping down a veritable rainbow of citrusy bliss – as long as each colour in the spectrum is orange. Pale, delicate blossom ran through to vibrant fresh fruit and darkest, tangiest marmalade. The crunch of candied pistachios contrasted beautifully with the slick, mealy texture of the olive oil cake. Sorry, Terry’s, you’ve lost your crown as the citrus king of my heart - still see you on Christmas Day though right?

Invigorated, I decided to try a Salford Dock (£11), a very modern, very cool take on the Irish coffee. My friend was about to order a regular coffee but the manager was already asking us if we could pay up (it was nearly ten o'clock) as the restaurant was shutting down around us. We offered to go through to the bar area but were told there is no need to, nevertheless we skipped the coffee and settled up a bill of just south of £200.

I promised myself I would try not to comment on the prices but allow me this one word: yikes.

I'm sure some people would say that that is an awful lot of money for a Salford boozer. But the truth is that is a lot of money for anywhere. Beautiful food costs money, that's true. Restaurants have overheads coming out of their underarms that we mere diners would probably never even think of. An old building such as The Black Friar must drink money like it's Boddies. 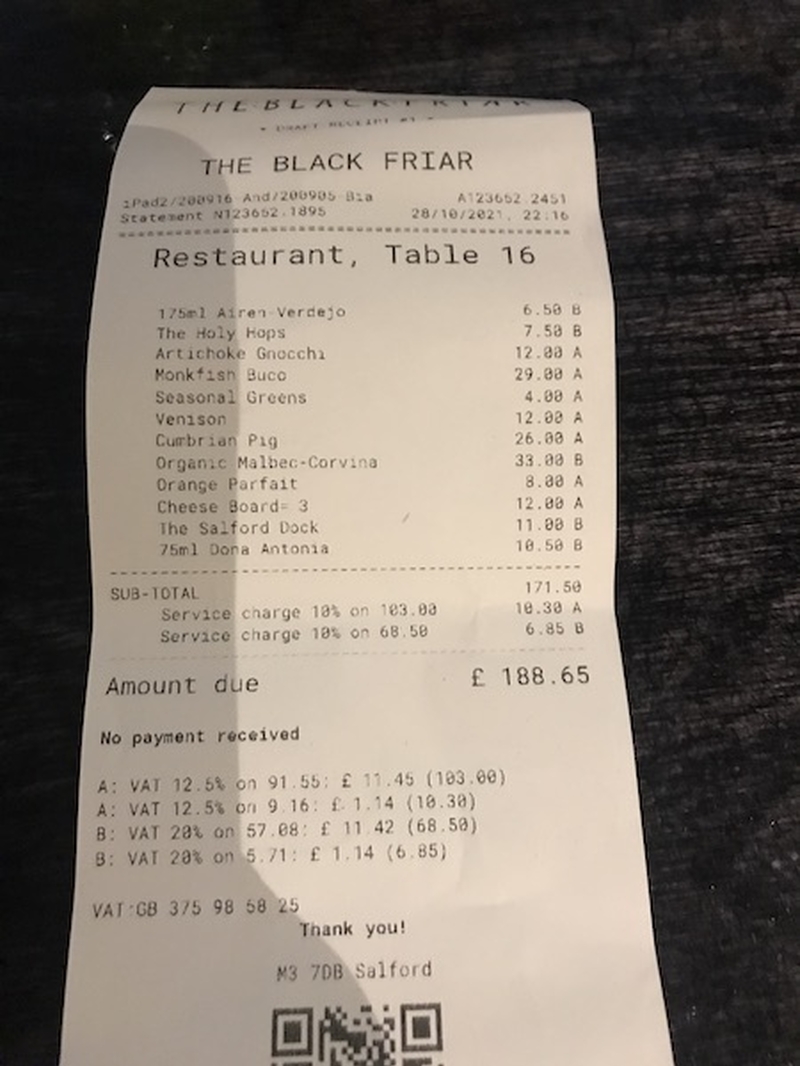