Understatement of the last couple of millennia: Britain has a complicated relationship with Europe.

Sure, you could look to the free-falling Brexit situation as evidence of the complex and fraught dynamic between ourselves and our continental neighbours. But who would want to put themselves through that?

Much classier than your average late-night takeaway offering, though the danger to the roof of your mouth is approximately the same.

Or maybe you could point to the Eurovision results. Those of us who caught a glimpse of (ok welded ourselves to the sofa to watch) the ultimate homage to sequins and smoke machines and bonkers lyrics, fully expecting a standard nul-point scenario, then had to rewire entire neural networks to understand that other countries were actually giving the UK some love. I can only compare it to how City fans felt around the 2009 season. Pure cognitive dissonance.

Instead, I chose to view the geopolitical situation through the lens of food. It's my hypothesis that the true reason Brexit came about is because we are ambivalent about our status in the European snacking order. Simultaneously sure that ours is the best and worried that our European brethren take almost exactly the same stuff and make it chicer, we decided to break bonds with our neighbours.

As a thought experiment, imagine souvlaki in a harbourside restaurant in a tiny Greek island, sun touching the water as beads of condensation form on your bottle of Mythos. Or pizza al taglio loaded with anchovies eaten one-handed in a dappled piazza in Rome, while scoping out la passeggiata. Roughly the same things are available on your average UK high street but most often sans the continental allure.

Somehow, curing your hangover in Paris with a jamon beurre crowded into a pavement cafe seems so much more stylish than knocking back a bacon butties in a greasy spoon, which is essentially the same thing if you think about it, plus or minus a few aesthetic touches.

I even recently saw a graph that ranked the pies of Europe, with some Polish beast coming out top and our humble porker languishing in last place. Truly, bottom of the pie chart. That hurts way worse than nul points.

I have tested my theory not on dinky cafes on tree-lined boulevards or overlooking the white-sand beaches of the Balearics, but somewhere almost as good – School Road in Sale.

More specifically, at PizzAmmore (a cunning portmanteau of Pizza and Ammore, the Neapolitan word for “love”), Sale’s answer to Manchester’s pizza mafia, if that’s not too controversial a word to use in the circumstances.

The restaurant itself is a sweet little spot, with the sunshine colours of its home city.  Its owners are Italian and the same outfit has morphed from Verace Kitchen, a more classic Italian restaurant, to a family-friendly joint specialising in the street food of Southern Italy, especially Naples.

The star of the simple room is the handmade brick oven, which was built using Sorrento's biscuit bricks were used for the base, and bricks from Santa Maria for the dome. It produces classic Neapolitan pizzas, cooked in around 90 seconds with the distinctive blackened "leopard" spots we have all come to know and love.

Pizza fritta is a little bit different, however. You could be forgiven if by the description you thought this dish – a Margherita pizza folded calzone style and then deep-fried – had been invented in a Glaswegian chippy with the express purpose of clogging up the Royal Infirmary Cardiology Ward. Actually, it’s a classic street food of Naples. There, doesn’t eating a “classic street food of Naples” sound much more healthful and on-trend than scarfing “deep-fried pizza”?

Either way, what you have is a beige crust, looking like a giant Cornish pasty but much chewier in texture, folded and sealed to protect a molten core of tomato sauce and cheese. PizzAmmore’s sauce is made from proper San Marzano toms and the cheese is a mix of fior di latte and parmesan, so much classier than your average late-night takeaway offering, though the danger to the roof of your mouth is approximately the same.

When cut into, a puddle of liquid cheese and tomato erupts from the shell, lightly perfumed with basil leaves. It's down and dirty and delicious.

Just to make sure I’d sampled a good array of Italian street food, I also ordered the arancini and crocche (£4.50 each). Both arrived a glorious golden brown, nestled like sleeping hamsters on a bed of leaves.

Both are familiar at an Italian friggitoria, usually a hole-in-the-wall type place specialising in fried foods. Arancini is probably the more familiar name – balls of arborio rice (and in this case peas) coated with breadcrumbs and deep-fried. These were simple and good if a tad heavy, but I preferred the less-common crocche, creamy mashed potatoes blended packed with cheese and cured meat and, again, fried. The shell was hot and crisp while the inside exploded with carby goodness.

Just for contrast, we tried the regular pizzas, simply wood-fired as god and nature intended. The cappricciosa (£9.50) with fior di latte, mushroom, olives, ham, and artichoke was just right for an early tea, with enough chunky topping to satisfy.

The Diavola was a bolder proposition, which boasted the same pillowy dough crust, this time serving as a bed for nduja, ventricina and fior di latte. Perfectly spicy.

We finished with a creamy tiramisu and lemon-soaked sponge, a puffball of citrus sharpness. Just for good measure, we tucked away some cannoli to make sure we’d really put Italian fried food to the test. It passed.

As customers, we are spoiled but it becomes harder to pick out a great pizza from the crowd. That's when something distinctive like a pizza fritta attracts the jaded.

I could spend the rest of my life circling around Greater Manchester’s pizza joints enjoying all the fractionally different offerings. In Sale alone, there is PizzAmmore and Rudy’s for Neapolitan style pizza, Mano a Bocca for a Roman-type. Basilico is an occasional trader at the Food Hall and a taglio-style slice shop is opening on Northenden Road.

In truth, it would be a great life, but a vastly shorter one. European-style or the more homely UK version, your arteries just couldn't take it.

So if you're trying - and failing - to understand oil reserves, NATO expansionism, the Northern Ireland protocol and Ursula von der Leyen, rest your head a while. Soothe your soul, if not your heart, with the simpler things. 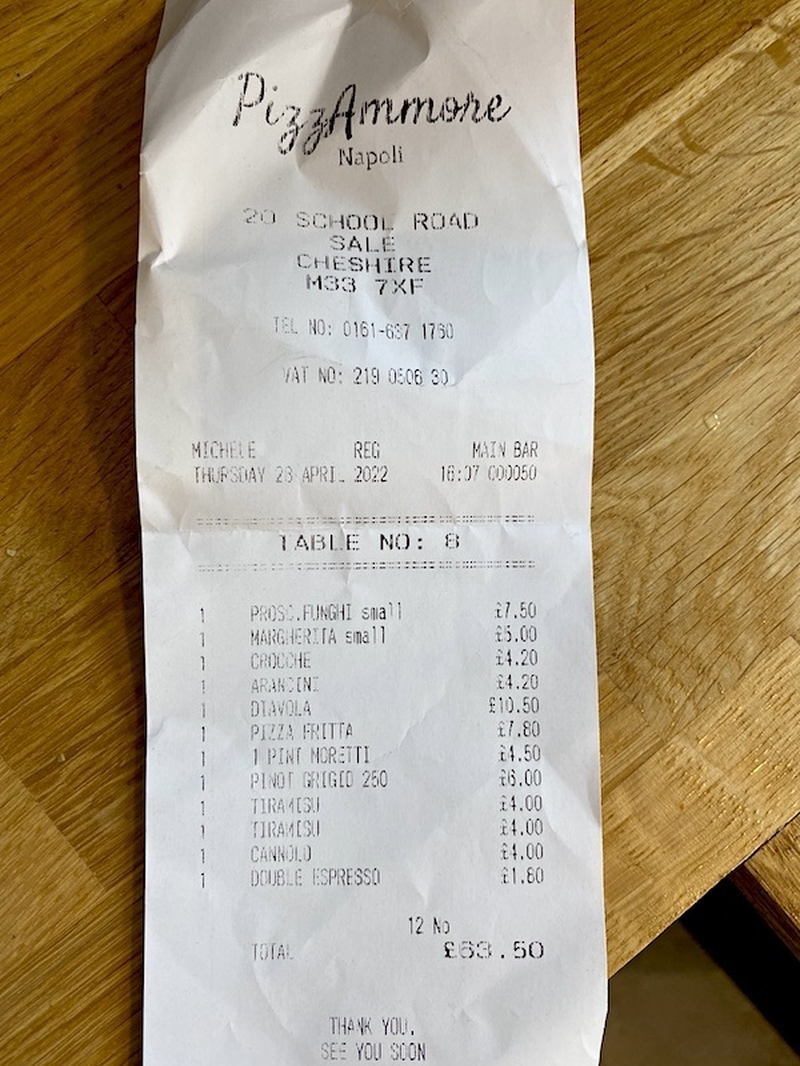 BYOB's yer uncle: bring your own booze restaurants in Manchester
What you say
Previous Article Next Article
Read Next
● / Mediterranean