'WE cleared a vast area, and Mr Waterhouse’s beautiful design rose, stone on stone and pillar on pillar. We spared no expense. Every detail we desired to have perfect. To have been parsimonious, to have neglected corners or recesses which were obscure, to have allowed ornamentation which was tawdry, would have been for ever to brand Manchester as a city given up to no higher thought than the quickest accumulation of wealth.'

I lingered in the pub far longer than I should have, but it's that sort of place. I'll be back, but the Abel Heywood needs to think about dropping the food prices a notch or two.

Abel Heywood spoke those words as he looked back on his long life and his role as Lord Mayor in delivering our present Town Hall.

The word 'polymath' just about does him justice: printer, publisher, politician, policeman, protester, petticoat plucker, pastrycook and paleontologist. Abel Heywood lived an extraordinary life, although for accuracy's sake I concede I made up the last three jobs on that list. Forgiveable I reckon because I was on an aliteration roll and nobody should get in the way of one of those. 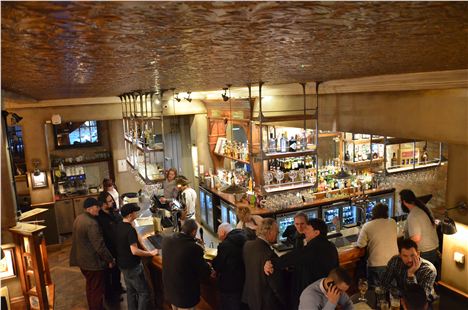 Good atmosphere in the Abel Heywood

Heywood served four months in New Bailey Prison in 1832 for refusing to pay a Stamp Duty tax in protest at its gross unfairness. This was a tax aimed at suppressing publishing, by making it largely impossible for any but the rich or those with patronage to print pamplets, magazines, newspapers and so on. Suppress publishing and it makes it hard to disseminate naughty insurrectionist thoughts, it helps keeps radicalism under control. Heywood's imprisonment was one of the nails in the coffin for the unjust tax. He was quite a man.

Most honourably, of course, he was a guidebook writer. 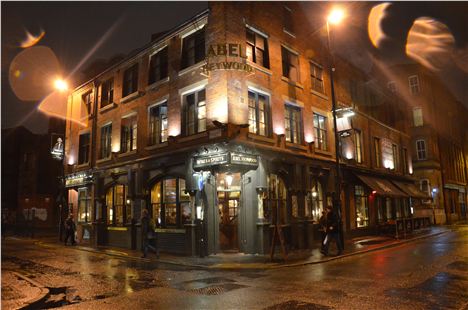 Heywood never ran any pubs - at least I don't think he did - but he might have approved of this conversion by Manchester brewer Hydes. Like the Town Hall it doesn't appear to have been done on the cheap. The ornamentation is never tawdry.

The pub and its fifteen sweet bedrooms occupy a former workshop, warehouse and occasional TV set - hairdressing sitcom Cutting It was filmed here. There are handsome wooden fixtures and fittings and big feature bars. It could have been a pastiche dog's dinner but it works, makes you want to cosy up and hang around for the second pint. The menu makes you want to hang around as well but as with the Town Hall, as with the fit-out, the food is not for the parsimonious. Prices are high.

The one that leaps out is the chargrilled NQ beef striploin, skinny fries, watercress salad and Bearnaise for £18.95. In a NQ pub? Bit much that, as is the seared scallops starter at £11.95 and the Goosnargh corn fed chicken with asparagus risotto at £15.95.

The brisket hash starter with a fried egg and beetroot relish (£7.95) is a proper little star though (main image) and worth every penny. Chunky, fibrous, satisfying, all the elements giving it a proper go. I could eat a couple of portions of this at each sitting. 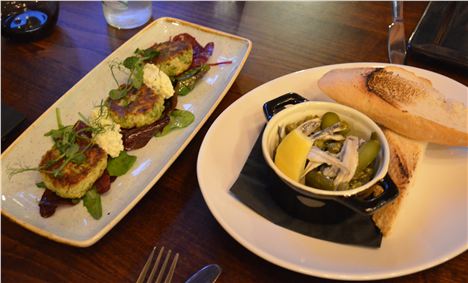 Broccoli fritters and anchovies and caperberries

I adored another starter of broccoli fritters with goats cheese and thyme (£6.95). There was a cracking consistency to the mix and good edge to the flavours. Suddenly the drabest of brassicas had purpose. A cheeky 'snack' of anchovies and caperberries (£3.75) joined the party to good effect.

A main of cider battered cod goujons for £13.50 was pleasant enough, fish no better than expected, minted peas similarly, with a vast stack of chips. This was a portion of chips for a cold night walking home from school trying to attract the attention of an unattainable love interest with the prospect of a flirty fried spud. It was a stack for two. It was too much. 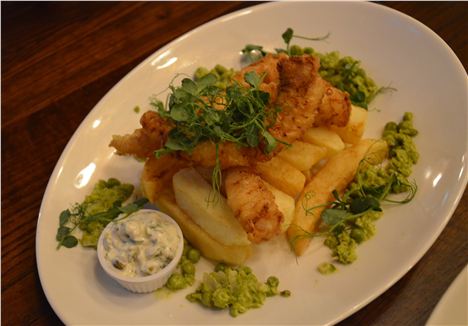 Good with lots of chips

The pie was better, a port wine game pie with mash (£14.95) and gravy that was rich and flavoursome thing with a pastry casing I wanted to applaud. This is one of the best pies in the city. The braised red cabbage was characterless though, needed to be doused in the gravy to ease its passage.

An Eton Mess was £6.50 and properly sweet, properly fruity, properly laden with cream and meringue. Good one that. 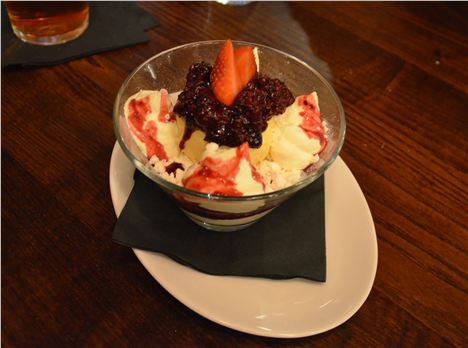 All in all I really enjoyed the meal and I really enjoyed the atmosphere. The crowd were a mix of Northern Quarter types and regular townies. The staff were enthusiastic and well-trained. The pints of hefty Arctic Blonde helped, more than 6% and brewed under the Beer Studio label by Hydes. I lingered in the pub far longer than I should, but it's that sort of place. I'll be back, but the Abel Heywood needs to think about dropping the food prices a notch or two.

The name is well-chosen though and completes the trinity of boozers named after the main people involved with Manchester Town Hall: The Waterhouse (named after the architect), The Ford Madox Brown (named after the painter of the Town Hall murals) and now The Abel Heywood (the politician who oversaw its creation and attended its completion).

By the way the main hour bell in Manchester Town Hall is known as Great Abel after our friend. Good name for a bell, Abel.