'Do we need more tapas? Rafael of El Rincon thinks we do' - Rafa's, Didsbury, reviewed

When I think of Spanish food I always remember a scene from the Nancy Mitford novel The Pursuit of Love, where in wartime England various toffs are aghast to find a Spaniard in their midst. They dig through a Spanish dictionary trying to find out how to tell poor Juan to sling his hook, when they accidentally stumble across the word for chef. When they discover that is Juan’s profession, he is instantly hired to transform their meagre rations into “delicious foreign oddments” to the great delight of all.

The oxtail too was outstanding, a gory knuckle of bone and flesh that looked appalling and tasted sublime

“Delicious oddments” is the perfect descriptor for tapas. Little nibbly bits originally designed to be eaten with drinks, I do worry that the fact that everything these days is selling itself as “tapas”, whether it be Mexican tapas or Korean, to indicate it comes on small plates (though my favourite is when people post pictures of plates of Wotsits and pickled onions and call it English tapas) has meant that we have become a little jaded.

Given as well that we are bedazzled by the new breed of Spanish restaurants that are all super authentic and super local, do we really need another tapas place? Rafael Cabrera, of El Rincon de Rafa fame, thinks we do, and has decided to open up a new offshoot in Didsbury village, this time known simply as ‘Rafa’s’.

El Rincon is of course, a Manchester institution. Well before the current Spanish explosion, it was thought of as where true Spaniards would go for a taste of home. You might spot the odd Premier League Footballer in there, hungry for the taste of real paella; dreaming of sunlit plazas and bustling mercados instead of rain-lashed streets and the Arndale Centre. Deansgate is no Las Ramblas, for better or worse.

So can Rafael find himself another niche? When I heard that this more casual establishment would be serving a “highlights” reel of El Rincon’s most popular dishes, I wasn’t sure that I needed to taste yet another iteration of patatas bravas. But while Rafael might be tempting people in with comforting familiarity, it turns out the menu of seasonal specials is his secret weapon. Ordering mainly from this menu, with a couple of classics, let me fall a little bit back in love with tapas again.

The interior is spacious and welcoming, with a bright modern feel that gets away from the rather claustrophobic dark colours and dangling jamons you can find in some Spanish restaurants. A dash of touristico is nodded to with some Picasso prints dotted on the walls. Enjoying a selection of tapas underneath a reproduction of Guernica, a depiction of the ceaseless terror of war, is a little jarring but there we go.

Otherwise the room feels simultaneously warm and bright. The service is top-notch too. Admittedly I was there early-ish of evening, (how incredibly un-Spanish of me) which meant it was on the quiet side and I had the undivided attention of the unfailingly lovely staff.

In order to impose order on the jumble that is tapas, let me start with the dishes I loved: mussels in garlic cream (£6.90), where fat pockets of peach-coloured flesh, enhanced only by garlicky cream and the taste of the sea, snuggled plumply in their half shells. On a marine theme, the cod tempura (£6.75), sizzling hot lumps of white fish in an outstandingly crisp batter, also hit the high notes.

The oxtail (£6.90) too was outstanding, a gory knuckle of bone and flesh that looked appalling and tasted sublime. Served in a vegetable reduction (translation: the meat juices and vegetables it was slow-cooked with, blended to a smooth and heavenly sauce) and garnished with a scattering of what appeared to be chips, appealing to my food wanderlust and northern soul all at once.

In the pretty good category we had the albondigas (£5.20), which are apparently a house speciality. They were very nice meatballs all round, but what seemed to be most special about them were their eye-opening size (much bigger than conkers but not quite as big as tennis balls, since you ask).

The plate of mixed ham and chorizo (£9.90) was also perfectly lovely, while the deep fried camembert with apple puree (£5.75) was certainly tasty but struck me as more M&S posh party food than traditional Spanish (not that there is anything wrong with that).

The third category is not so much bad as ‘hmmmm’. Here we find the pan verde (£2.90), which had an underwhelming look about it (though plenty of garlic kick). I’d been excited to try the aubergine with honey (£6.90) as my passion for the nightshade family knows no bounds, but they were quite bland and also looked like something threatening found on the bottom of an ocean (I still made good use of them to scoop up various delicious sauces).

Out of the eight dishes we'd ordered there were three smashers, three goods and two oks - an impressive hit-rate.

As for dessert, churros (£5), smothered with cinnamon sugar and served with dipping chocolate, were very popular with both of us (I wasn’t eating alone), while I greedily kept the Crema Catalana (£5), a soupy custard flavoured with vanilla and orange zest, and topped with a hard crust of burnt sugar, all to myself.

As for Juan, our Spanish hero, he ends up as king of his kitchen and wealthy aristocrats throughout the county desperately attempt to bribe him away to make their rations into delicious oddments too. If his were as good as Rafa’s, I don’t blame them. 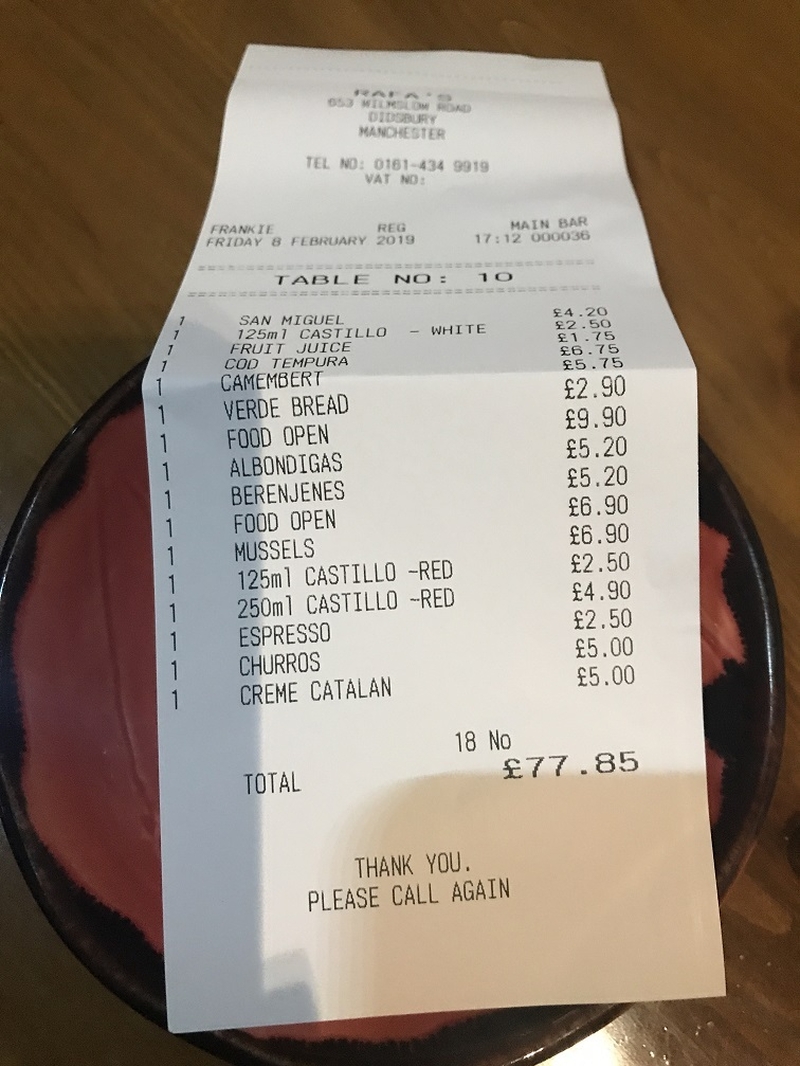