I am not a vegan. I’m not even a vegetarian. I am shitting it about the future of the planet.

I made the mistake of watching that David Attenborough documentary where he calmly pointed out that we’re sleepwalking towards a global climate disaster and a mass extinction event and if we don’t act soon, we’ll all perish on a barren and deserted fire-planet devoid of all vegetation and animal life.

Is the difference in taste and texture so great it’s worth a load of little pigs getting slaughtered and sea levels rising to such an extent your Nan’s caravan in Lytham gets washed away forever?

So I took the decision to cut down on my meat consumption. Apparently a good way of ensuring a healthier planet and body. A few years ago, this would’ve led to endless miserable meals pushing a sad bit of broccoli and some lentils around a plate, but we’re currently surfing the crest of a plant-based wave. There has never been an easier time to have a meat-free diet.

Enter Purezza, the plant-based pizzeria in the Northern Quarter.

Originally from Brighton (of course), Purezza claims to be the UK’s first vegan pizzeria. It also claims to be carbon neutral, and all its restaurants are kitted out with reclaimed and recycled materials.

I have a theory that there’s no such thing as bad pizza. Not even German frozen food boffin Dr Oetker, has managed it. What is bad, almost without fail, is vegan cheese. Awful texture, terrible taste. Given the importance of cheese to pizza, I entered Purezza with no small degree of trepidation.

The restaurant looks like the sort of place Michael Corleone might gun down a corrupt New York City police captain. Café curtains tickling the bottom of the windows. Chequered tiled floor. Wooden booth seating. If this is all recycled and reclaimed, it’s a lesson to us all on what can be achieved with a bit of imagination.

An Amaretto and Ginger Sour (£8), and a Purezza Spritz (£9) arrived promptly and were finished off almost as quickly. A Fiano organic wine (£25) was a refreshing accompaniment to the meal.

The Meet Feast (£14.50) was a white pizza, which I hadn’t realised at the time of ordering and is something I’m fundamentally against but you know what? It was good. Instead of tomato sauce, there was a vegan pepper jack cheese topping. Delicately spicy, with the consistency of that nacho cheese sauce you get at the cinema.

The “meat” - a collection of plant-based alternatives to salami, mince, sausage and porchetta - is not going to fool a keen-tongued carnivore, but then it’s not meant to. Is it better than a proper meat feast pizza? No, not even close. Is the difference in taste and texture so great it’s worth a load of little pigs getting slaughtered and sea levels rising to such an extent your Nan’s caravan in Lytham gets washed away forever? No, I don’t think it is. It’s a good, tasty, non-meaty pizza. It needs tomato sauce though.

I know it needs tomato sauce as my partner ordered The Margherita One (£6). Serious pizza heads will tell you that you should never have more than two toppings, that cheese and tomato is the king of pizzas, the perfect interaction between crust, sauce and cheese. And so it was here. The crust, a Neapolitan sourdough, and the rich, tangy tomato sauce are as good as any you’ll get in town. It stands up to Rudy’s or Franco Manca. The mozzarella though? The mozzarella was - weird. If the Purezza blurb is to be believed and scientists have spent countless hours working on the perfect Frankencheese, then science has a long way to go before dairy farmers need worry about their mortgage payments.

Dough balls (£5) compared well to their Pizza Express cousins but were injected with a sauce that was almost apologetically cheese-flavoured. Roasted potatoes (£5) were covered in melted vegan cheese, giving them a stodginess where a crispness would have been more appreciated. Rocket salad (£3.50) was a welcome respite from the Schrödinger’s cheese stodge-fest, but under-dressed and uninspiring.

A key lime pie (£5) and a caramel brownie with coconut ice cream (£5) were exceptional - if stingily portioned and lost on an overly large plate. The citrus of the key lime pie was necessary after so much vegan cheese but the coconut ice-cream was the unexpected star of the show. A cooling tropical cameo that had us skipping out of the restaurant.

For vegetarians and vegans to be able to have a restaurant like Purezza, and for it to be able to raise awareness about how far plant-based food has come, well it’s priceless. The concept is great. The food is good. I hope it flourishes. 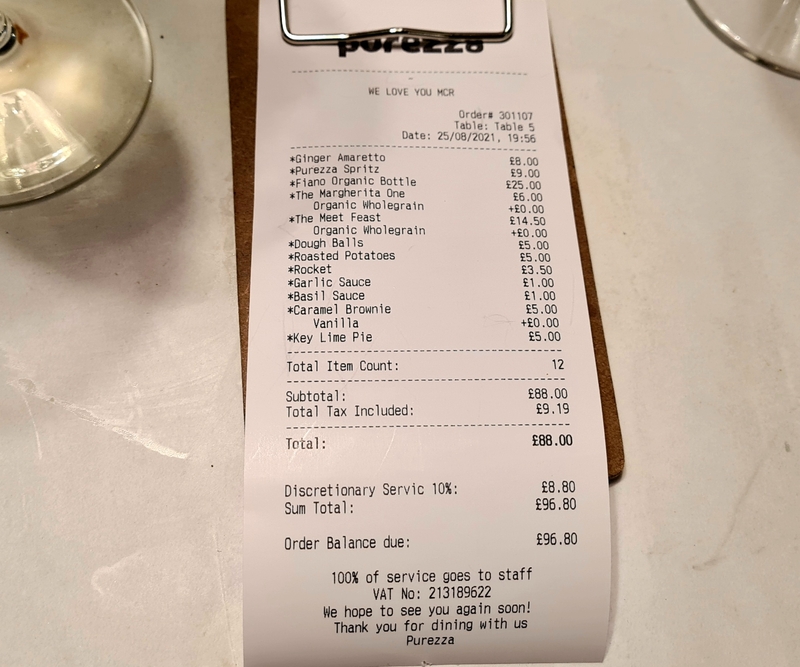