New designs have been drawn up for the Angel Square scheme underway near the Co-operative’s flagship headquarters building – increasing the original office space due to soaring demand and the strength of Manchester’s booming economy. An extra storey has been added to one of the two new Angel Square office blocks, which, together, will house up to 3,500 workers. The new buildings will provide over 39,000 square metres of premium office space and 1,300 square metres of ground-floor leisure and retail, and almost 500 cycle spaces.

The scheme will be developed speculatively, with work expected to start on site in the spring. Paul Pavia, head of development at MEPC, the property firm working on the NOMA scheme, said: “We’re updating our designs for 2 & 3 Angel Square to help better meet the needs of modern corporate occupiers, including a reduction in car parking and increase in cycling facilities alongside other great amenities such as roof terraces. We will also be improving the surrounding public realm at Angel Square, by including more walkways and open spaces for people to enjoy. An additional storey will be added to 2 Angel Square as well, giving the building greater prominence.” 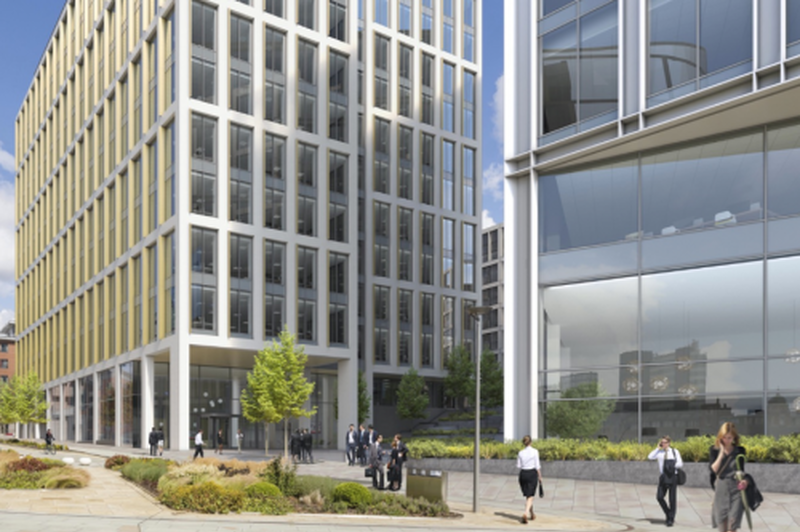 Office space out near the airport is also taking off, with Art Deco building Trafford House benefitting from a £1.5 million transformation to fully renovate and upgrade facilities. The building – in a prime location on Southmoor Industrial Estate in Wythenshawe, close to the M56 and Manchester Airport – now houses secure bike storage and showers, separate kitchen facilities and a high-spec communal business lounge alongside the range of high-quality, affordable office suites. The scheme was led by South Street Capital, with project managers and architects Wainwright & Co, together with Pickled Spider Creative, in charge of design and delivery, and Waingap as the contractor.

South Street Capital director Helen Macrow says: “A huge amount of effort has been put into this project and was the result of some excellent collaboration between Knight Frank, joint agents Williams Sillitoe and Wainwright & Co, resulting in Trafford House being delivered on time and on budget. The building was in a pretty shocking condition at acquisition and the team has delivered a massive transformation with some fabulous fit-out detail that reflects the building’s Art Deco heritage.” 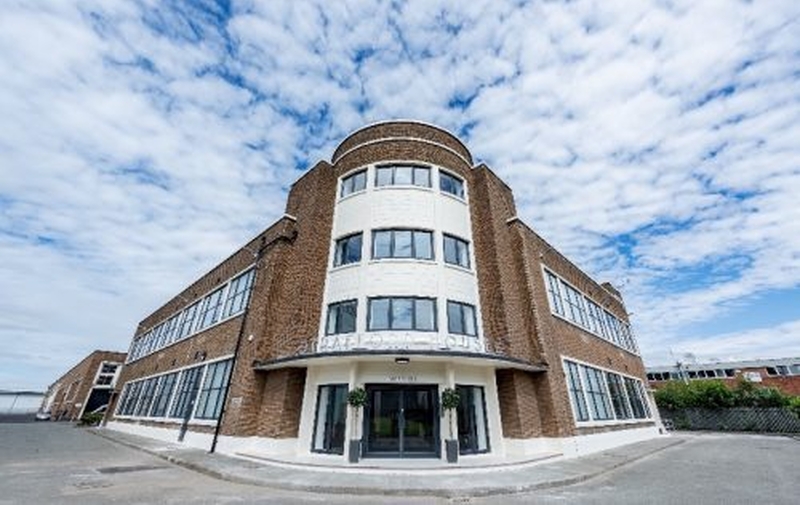 …while plans are afoot in Trafford Park

Plans have been drawn up for a new multi-million-pound venue relocating EventCity from Barton Dock Road to TraffordCity on the other side of the Trafford Centre. The new conference, gala dinner and exhibition space will open in September 2020 in TraffordCity, already home to a range of activities including ski slopes at Chill Factore and indoor skydiving at iFLY.

The improved space will be designed to be more flexible than the current site and include a central foyer with breakout space, and around 2,000 free parking spaces. Once Eventcity has moved from its current spot in July 2020, a proposal (with Peel L&P) will see the Barton Dock Road site become home to wellbeing resort Therme Manchester, alongside the creation of a new football facility to replace the Soccerdome pitches currently next to Chill Factore.

Neil Lees, acting chief executive at EventCity and deputy chairman of the Peel Group, says: “It has long been an ambition for the business to redesign the setting into a more dedicated space. We’re committed to offering our clients and visitors the very best experience, and we’re confident that our plans for the new venue will do just that, whilst still providing the second largest conference and events space outside of London.” 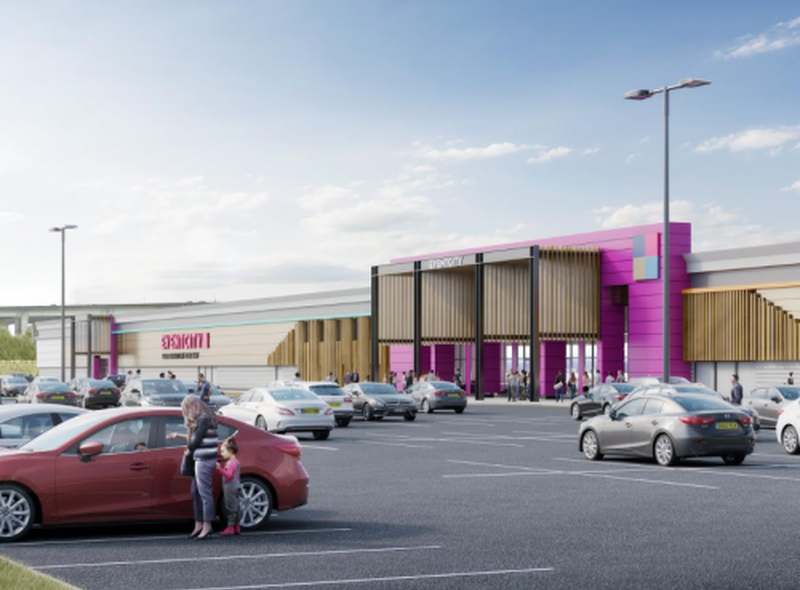 Plans by Capital&Centric to develop a new ‘green’ 275-bed hotel in Piccadilly East have been approved by Manchester City Council. On the corner of Adair Street and Great Ancoats Street, the 110,000 square foot Leonardo Hotel will span 13 floors and is due to open in 2021. Local people backed the plans, which will also see a new public square, restaurant and bar, and planters will decorate the side of the Jenga-inspired building, providing a crescendo of green from the roof down to the landscaped public areas. Designed by Stephenson Studio, the hotel recently won the President’s Award at the Manchester Society of Architects awards. Adam Higgins, co-founder of Capital&Centric says: “With its award-winning and striking design, the Adair Street Hotel will become a fitting icon for what’s fast becoming Manchester’s most exciting neighbourhood to watch.”

Residents will be moving into Capital&Centric’s Piccadilly East’s Phoenix apartment development on Chapeltown Street later this year, with the much-talked about owner-occupier community landing at nearby Crusader Mill in 2020. Several independent businesses including Track Brewing, Chapeltown Picture House and live music venue Yerrrr bar are already bringing life back to the area behind Piccadilly train station and Piccadilly East is fast becoming one of the city’s biggest development opportunities, said to be on a par with London’s King’s Cross. 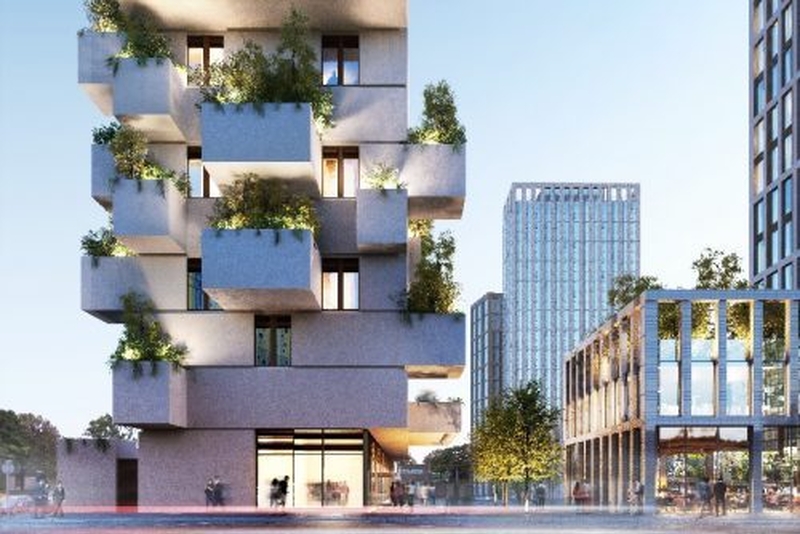 It’s good news for students too, as Cheshire property group Vita Group has added a fourth residence to its portfolio, opening a new 384-bed residence at Circle Square. The 17-storey building, constructed by Bowmer and Kirkland on the former BBC Oxford Road location, focuses on cluster living, with each storey containing six en suite bedrooms sharing luxury lounges and kitchen areas on each floor. It joins Manchester’s original and award-winning Vita Student residence on First Street – which offers an exclusive residence of 279 apartments and a peaceful environment loved for its airy and open double-height Hub space – along with residences in Birmingham and Leeds. Vita Group chief executive Mark Stott says: “There are huge growth plans for Vita Student and I’m delighted to see another three residences open.” 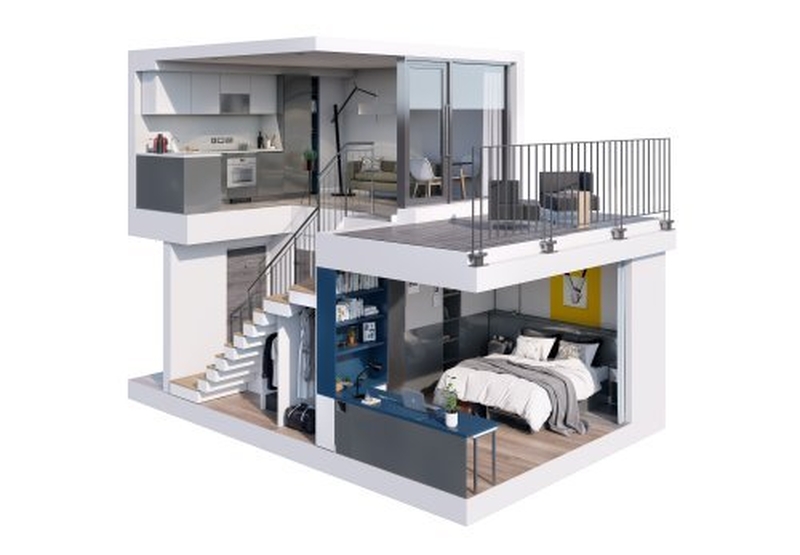