Cult pizzeria Ciaooo appeared on my radar because a colleague - not a food reviewer, by the way - wouldn’t shut up about it. He spends a lot of time not shutting up about stuff but this was relentless. Even at a press lunch at the newly opened Franco Manca he continued to rave about Ciaooo. So it went on the review list.

Any teenage turtle knows that when it comes to pizza, it’s all about the base

I had planned to visit on a Monday with my pals - let's call them the Dough Bros - all primed to stuff their crusts when I realised Ciaooo doesn’t open on Mondays. After a mild panic, I thought, why not catch two pigeons with one bean (as they say in Italy) and do a dough-ble whammy review? Back to Franco Manca on Monday, Ciaooo on Wednesday.

Not surprisingly, the Dough Bros were cool with that.

Franco Manca don’t take bookings so I showed up 10 minutes early to bag a table. I was told I’d have to leave and come back as I couldn’t hog a table that might be wanted by other guests. After a prolonged application of the forlorn, puppy-dog eyes, they gave in, and the Dough Bros showed up after five minutes anyway.

Twenty-five minutes later, we were hallucinating oases when a waitress plonked a bottle of tap water down and vanished. Approximately 35 minutes after I had begrudgingly been given the table, she reappeared and nonchalantly asked if anyone had taken our order.

We had to call her back to order drinks.

Our (red) natural Dolcetto Carlindepaolo (£17.50) arrived in the form of a bottle of white - hastily swapped when we squeaked as she started to unscrew the lid. Pizzas followed, but no sides. When they did appear, the dips were not what we’d ordered. Eek.

Over at Ciaooo, they were almost too keen to take our order and had to return several times while we faffed around. The ‘Don Giovanni’ house red (£16.95) - a cab sav specially imported from Benevento apparently - went down well; we preferred it to the wishy washy Dolcetto but that's probably as much down to grape preference as anything.

It was quiet when we sat down but boy did it fill up in the time we were there and, even with just two waiting staff, the service remained sharp.

The decor couldn’t be more different. FM feels like a chain - fitted out in forgettable, glossy features. Ciaooo with its wall mural befitting of the neighbourhood and functional furniture doesn't feel like a special occasion place.

Both have those huge dome-shaped pizza ovens but - and I am no expert here - FM’s flames seemed a little on the tame side while Ciaooo’s housed a raging inferno.

FM’s special board boasted meat and veg specials and unfamiliar additional toppings - our favourite being Montgomery’s Ogleshield, which sounds like a piece of electrical tape placed over the red light on a perv’s camera but is actually a type of cheese. Ciaooo's was much more minimal with just one special pizza and one (very) special dessert.

With just seven options at FM and thrice that at Ciaooo, both menus had a mix of classic and modern - FM's focusing on locally sourced ingredients and Ciaooo experimenting with things like red wine cream. FM offer vegan cheese but Ciaooo do not - both menus are notably pork-tastic.

Any teenage turtle knows that when it comes to pizza, it’s all about the base. Ciaooo was the hands-down winner. Not many pizzas make me gasp as they arrive at the table. That puffed-up crust was soft as Silvio Berlusconi’s pillow.

FM’s dough was flavourful and the crusts nice and gnarly - points too for the punchy stilton dip - but the underside was overly blackened whereas the top was underdone in places.

We started with the basic bitches. FM’s (ahem) No.2 with organic tomato, British mozzarella and basil (£6.75) was decent but the sauce a bit meh. Ciaooo’s Bufala (£7.90) had a better sauce, elevated by buffalo mozzarella and THAT crust. Both had some sogginess to the middle - which you expect from Neopolitan pizza - but FM’s disintegrated into mulch while Ciaoo's crust helped sponge up any excess liquid.

Franco’s pancetta-frilled meat special (£9) featured green peppers from Vesuvio adding a bitterness I relished but the Dough Bros very much didn’t. Ciaooo’s eschewed tomato sauce for an alarmingly yellow, seasonal pumpkin puree, provola cheese, sausage, pancetta and ‘parmesan waffles’ - surely the best kind - and a whole ball of oozing, fresh burrata in the middle. If that doesn’t make your jaw drop then we can’t be friends.

Our third pizza was a wildcard with anchovies and olives. All three of us are salty dogs but we found FM’s version (No.5: tomato, garlic, oregano, capers, Kalamata olives, Cantabrian anchovies and mozzarella - £8) - a bit too salty and garlicky.

Once we’d got over the lack of cheese - perfectly acceptable for many Italians - Ciaooo’s Napoli (San Marzano DOP, cherry tomatoes, olives, garlic, anchovies - £8) was very impressive indeed. I honestly didn’t miss the cheese.

FM’s side salad (£2.95) included alfalfa sprouts and intense, dried San Marzano tomatoes - the waitress bafflingly asked if we’d like it as a starter. Ciaooo’s (£2.50) was simpler with crisp rocket and a drizzle of balsamic glaze.

Ciaooo’s tiramisu (£5) looked - but thankfully didn’t taste - like a McPie. It was denser and more chocolatey than Franco Manca’s superior light-as-a-tutu version (£3.95). Thanks to Bake Off, we knew what a sfogliatella was and Franco’s was delightful but Toksvig-sized. A whole ball of burrata mozzarella drizzled with pistachio sauce, Nutella and crumbled biscuits (£6) won the showstopper for Ciaooo - although a bit of fruit would have been nice.

Any new pizza place in Manchester has to rise to the competition of the likes of Rudy’s and Honest Crust. There has been a lot of fanfare about Franco Manca opening here and it certainly isn't struggling for custom. FM's food was fine, far better than your average pizza chain - the service not so good, Al.

For my money, schlepping to Ciaooo is well worth the effort. The've created a pizza base to dough for and I can't wait to check out the rest of their creations. 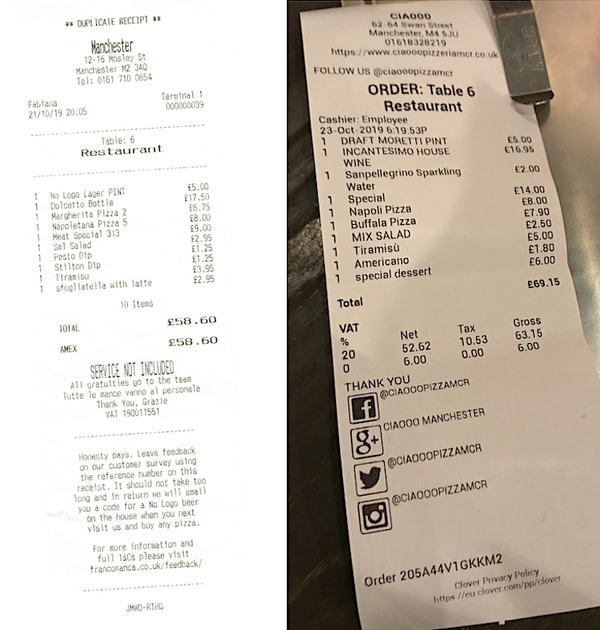 The scores for Franco Manca