Lucy Tomlinson on breaking the spell of lockdown - in Prestwich

The summer solstice is the perfect time to visit Prestwich.

Or more precisely, it’s the perfect time to visit the Scandinavian restaurant OSMA Kitchen. The Scandis love a good midsummer celebration, lots of flower garlands and bonfires - all in fine pagan tradition - so it feels right to spend a long, light-filled evening there.

Danielle Heron and Sofie Stoermann-Naess got together to open OSMA after stints at L’Enclume and triple Michelin-starred Maaemo in Oslo (Stoermann-Naess is Norwegian) in Heron’s home town of Prestwich. Indeed, the name OSMA is an amalgamation of Oslo and Manchester, in tribute to the two cities.

Lazily, with its Scandinavian heritage, I was expecting OSMA’s interiors to be a kind of IKEA upgrade. However, instead of the usual blonde wood and tealights the room is done out in pale leather and veiny ox-blood marble. A hanging arrangement of dried flowers is suspended above a large, plinth-like table. It’s all very maiden-sacrifice chic.

Like the décor, the menu was a little more robust than I’d been expecting. The daytime menu of open sandwiches, juices and salads gives way to a "food bar", i.e. small plates - a description which really doesn't do justice to what is on offer here. There is also a fine and compact wine list (I had a glass of Terodelgo at £7.25).

We started with a simple plate of salami (£4.50) and some hefty hunks of Pollen bread. I’ve noticed that serving up a very simple dish of cured meat (no messing with extraneous green bits, thank you very much) as a pre-starter is very fashionable at the moment - coppa being a favourite - and this shows why. Just carefully made salami, delicately flecked with herbal fennel seeds, good bread and butter, it needed nothing else.

Something else is what we get though, and a lot of it. Small plates are back out in force and we are encouraged to order four each. There are about ten plates on the menu (it changes weekly) so we decide to leave aside the most “standard”-sounding items – chicken and salmon. This becomes a matter of regret later on when it turns out there is no such thing as standard at OSMA.

Pork croquettes came first, delightful little morsels of pork shoulder with that quixotic dry-yet-juicy texture of slow-cooked meat, blobbed with a vivid green sauce that might be based on wild garlic. These were rapidly followed by the fish dishes. A firm-textured seabass (£7.50) garlanded with frills of thinly pared lipstick-pink radishes and speckled with tiny green nasturtiums was one of my favourite dishes of the evening.

Mackerel (£7) was - less so. Smoked and cured fish is a dominant theme in Scandinavian cooking so it's no surprise that it features on the menu. This particular specimen was served with golden turnips on an undulating jelly blob and sprinkled with elderflowers but that couldn’t disguise the fact that this tasted of old things. It made me think of an unopened room in a museum. Cured fish fans will love it but it wasn't for this English palate, I'm afraid.

Onwards though, and next was a disc of rillettes made from lamb belly (£7.50), smothered in goat’s cheese, merging the richness of the French farmyard with the cool, grassy notes of cucumber and dill so beloved in Scandinavian cookery.

A breath later and roast La Ratte potatoes with lovage and dulse (£6) arrived. "Is this - roast potato soup?" asked my friend and yes quite unusually the roasties came swathed in a cream. It was at this point that I started to wonder what mind-bending thing the kitchen was planning to do with that standard-sounding chicken. As the menu changes every week I guess I will never find out.

I loved the lamb but the richness of it set the next couple of dishes up for a slight fall. Mild, nutty white asparagus (£7.50) would have been a delicate showstopper if my palate wasn’t already pinging about like a pinball in a machine. Petals of Grelot onion (£8) with a confit egg yolk more than held its own flavour-wise (I particularly liked the way the sulphurous onion peeked out through a generous lashing of lime) but I think I would have been able to appreciate both of these intricate vegetable dishes more if they had been served earlier on. I can see that OSMA is trying to find a more casual path than its Michelin-starred forebears but the structure of a tasting menu might suit.

If you thought puddings might let up on the pace, you'd be completely mistaken. A melilot-infused custard (£6) was served with berries and dotted with what looked like elderflower gel (melilot is a kind of delicate-tasting sweet clover). Berries and cream are a very traditional midsummer dish in Scandinavia so it was a lovely and sophisticated nod to the time of year.

Our other dessert was anything but delicate, however. I usually think chocolate puddings are put on the menu as a bit of a crowdpleaser, something to tempt those who might otherwise refuse over the line.

In the picture above, the chocolate and coffee pudding (£7) looks like it’s served with grated cheese. That, my friends, is because it is. CHEESE. Norwegian brunost to be precise. Brunost is a kind of fudgy orange-brown block that fans claim tastes of Caramac and is often served with jam. It was as mad as it sounds and yet my spoon kept dipping back in as I tried to figure it all out. Was it an edge too savoury, or did it work? Did I love it? I don't think so, but I've been thinking about it for a couple of weeks now.

OSMA has made me realise that in this past year my gastronomic world has slowly shrunk from wide-open territory to cosy bubble, lined with a feather-soft blanket of feel-good carbs, without me noticing. Eating at OSMA was a bit like watching an Oscar-winner after a steady diet of Marvel films. Stimulating, unpredictable and just a teeny bit tiring.

Throughout lockdown I’ve been eating. Oh yes, I’ve been cooking creamy pasta dishes and hearty roasts, ordering in pizzas so large I could use them as throw blankets, whipping up a batch of brownies when I felt sad or bored or both. Cook-at-home boxes have been a blessing but chefs have played it safe while they concentrated on the technical challenges of relying on the worst sous chefs in the world, i.e. the general public.

OSMA should be mentioned in the same breath as Where The Light Gets In or Erst. It’s precise, intelligent, food with an underlying dark, witchy madness to it – and that’s about as Scandinavian as you can get. I can’t promise you’ll love every mouthful but you won’t be bored.

This is food that challenges your brain cells as well as your taste buds to work just that little bit harder, to throw off that comfort blanket and really taste what’s out there. Even if that is cheese on your chocolate pudding. It's time for eating to be an adventure again. 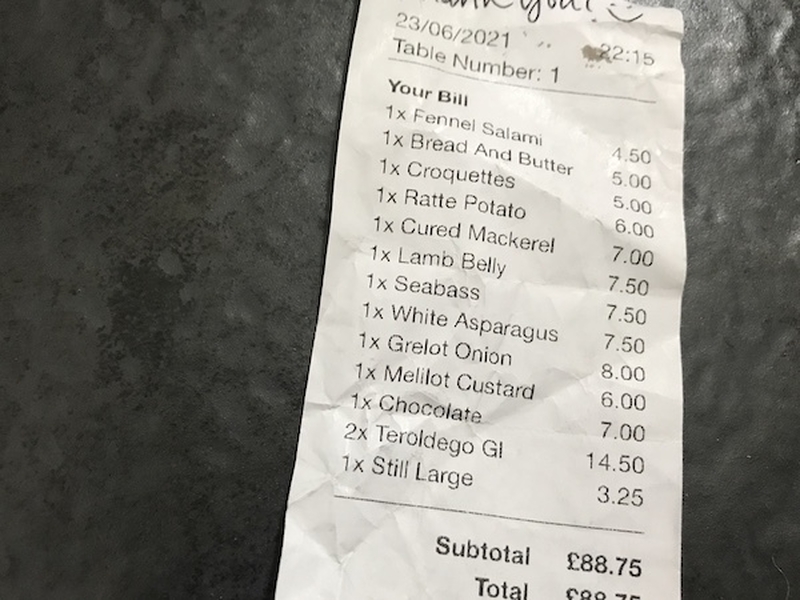