IT’S curious to see a lot of people being giddy in personal protection equipment, aka PPE. It’s not, after all, a giddy look. Instead, it more resembles a clean-up operation after the release of a deadly virus.

Yet, at the ceremony to mark the completion of the £320m Ordsall Chord project, engineers, architects, Network Rail executives, historical consultants, press and PR people were walking around with possessed grins as though present at the canonisation of a new saint.

In this case, it was St Bridge, an inanimate object of veneration that has already performed one miracle: uniting directly Manchester’s big two stations, Piccadilly and Victoria. This has been planned for a mere 170 years but has arrived slower than a Transpennine Express train on a Sunday.

Ok, not that slow, that would be ridiculous.

Still, part of the reason behind the Ordsall Chord, which includes not only the bridge but the lengthy approach works as well, is it will speed up connections and increase rail capacity across the North of England. It will, we are told, boost employment by up to 30,000 jobs. Let’s hope so, although 10,000 extra jobs would be a good start.

The first passenger trains are expected to use the bridge by mid-December, with full services running by May.

The bridge is a beauty, a glorious sweep of CorTen steel that we sang a song for in this article. It introduces drama and robust grace to the south-western part of the city centre and should also deliver some fine public realm. Designed by BDP architects, it’s a real collaboration too, as laid out in this article.

There will, of course, be nagging doubt and residual controversy over the way the Ordsall Chord severs the link between the oldest station in the world (1830), which survives in the Museum of Science and Industry, and the main line.

Some consolation is that the Grade I listed ‘Stephenson viaduct’ over the River Irwell has been restored, under the trained eye of Bernadette Bone, and is now far more visible to the interested passer-by.

For now though, let’s praise the modern achievement that is Ordsall Chord and the mighty St Bridge. If you get chance take a walk down there and have a look, PPE is not required. Unless you’re a festishist and that’s your ‘thing’.

If the walk seems too much then take a gander at these pictures instead. 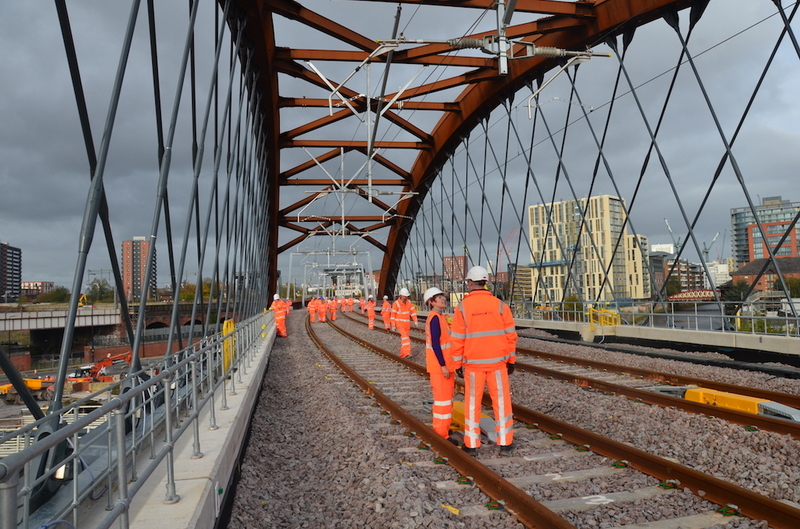 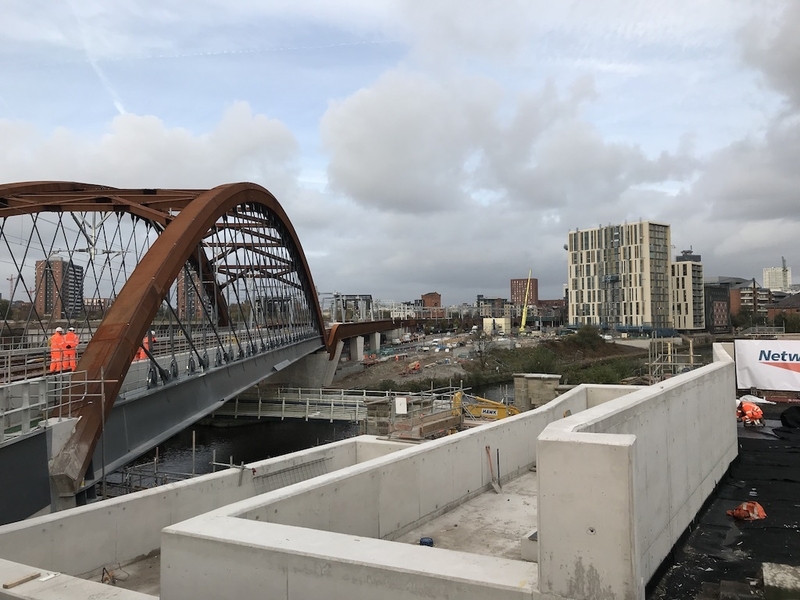 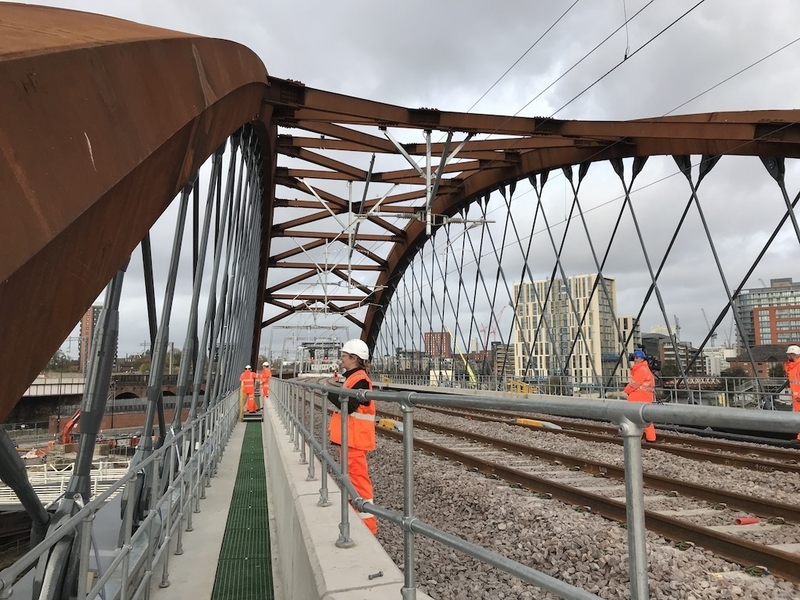 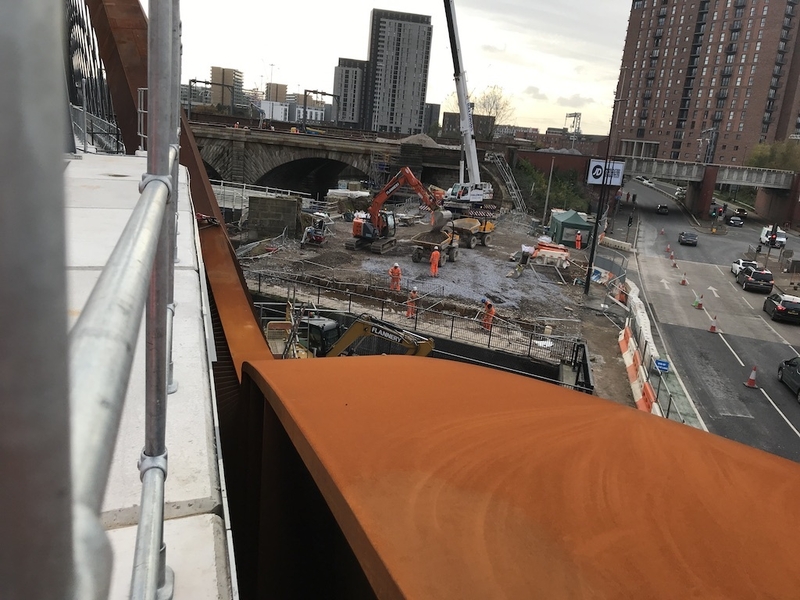 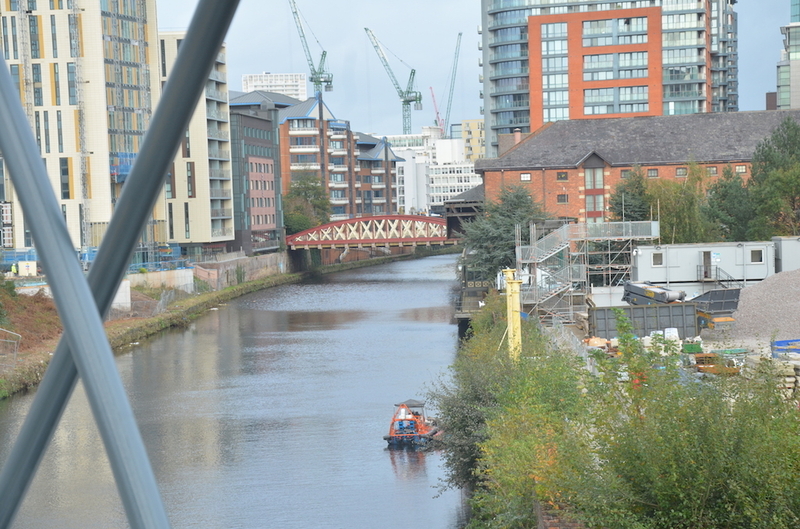 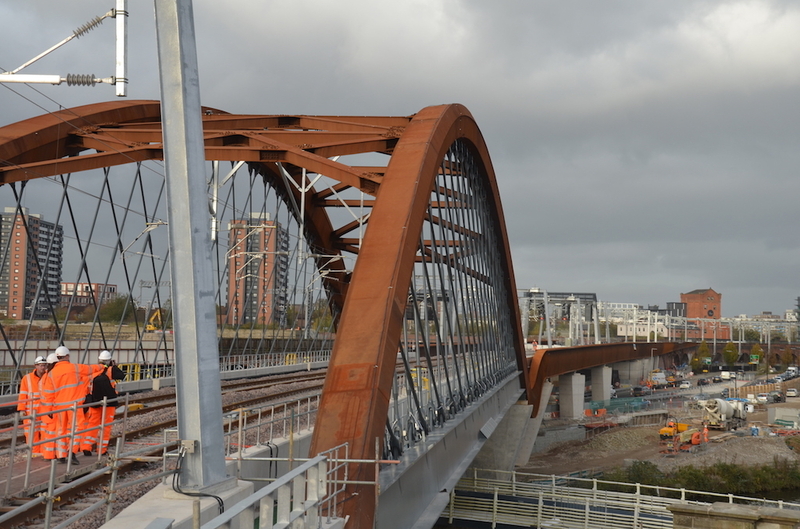 More about the Ordsall Chord:

- The network arch bridge is the first asymmetrical rail bridge in the world.

- Two of the largest cranes in Europe huge cranes were used to lift the two 600 tonne arches into place.

- The Chord sits side-by-side with the Grade I listed Stephenson bridge built in 1830.  The bridge is currently being restored.

- The Ordsall Chord will connect Manchester Victoria and Piccadilly, increasing capacity and reducing congestion (by up to a quarter at Piccadilly).

- Trains from the east (Leeds, Newcastle) will go through Victoria then round to Manchester Piccadilly, helping manage congestion.

- The Chord will also open new direct routes to Manchester Airport from Newcastle, Warrington and Bradford.

- Princess Bridge was taken down, to be replaced by a new footbridge across the River Irwell. 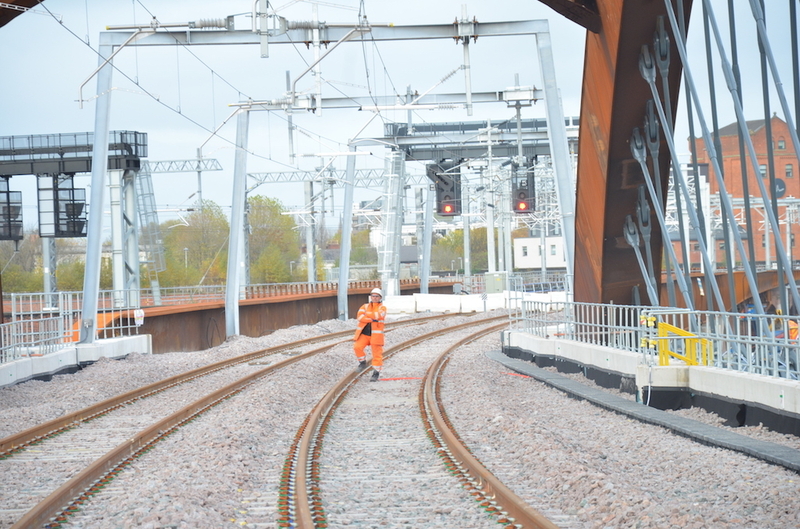 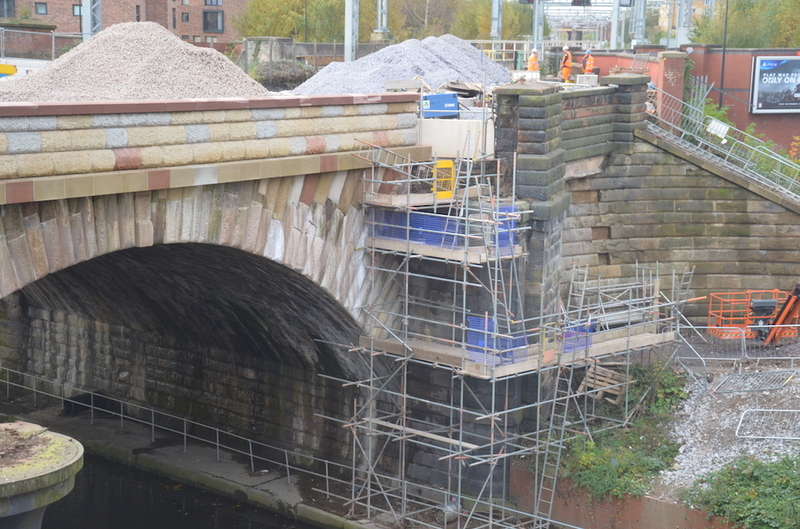 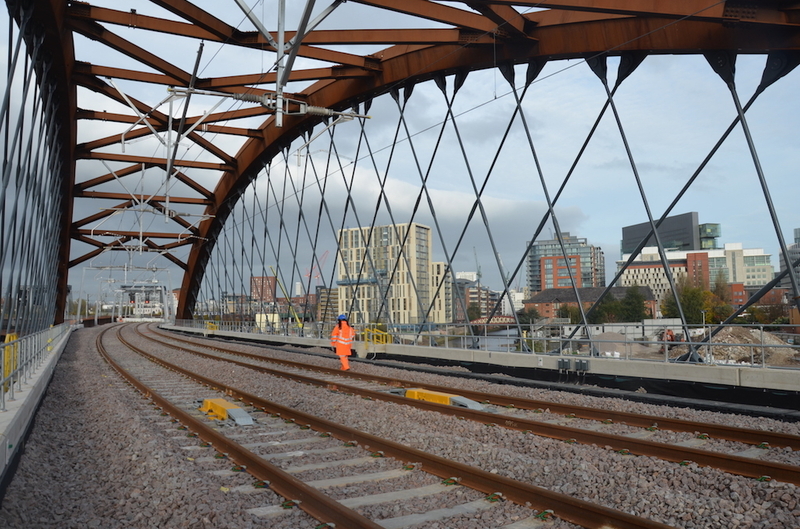 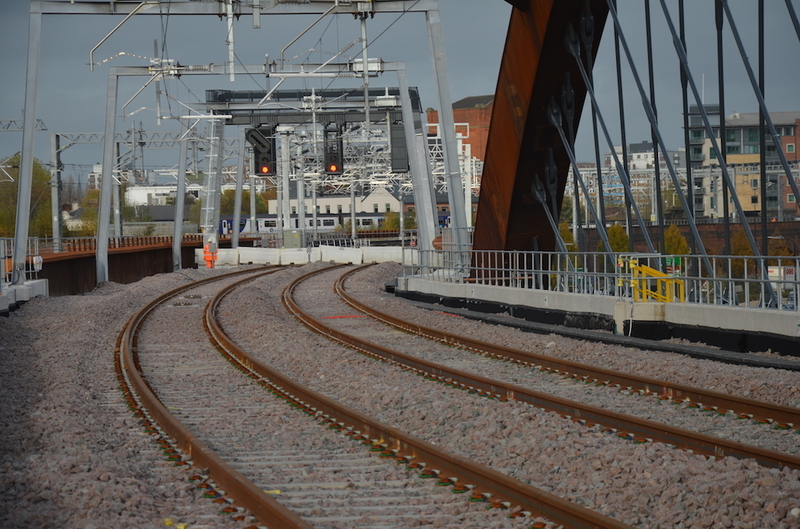 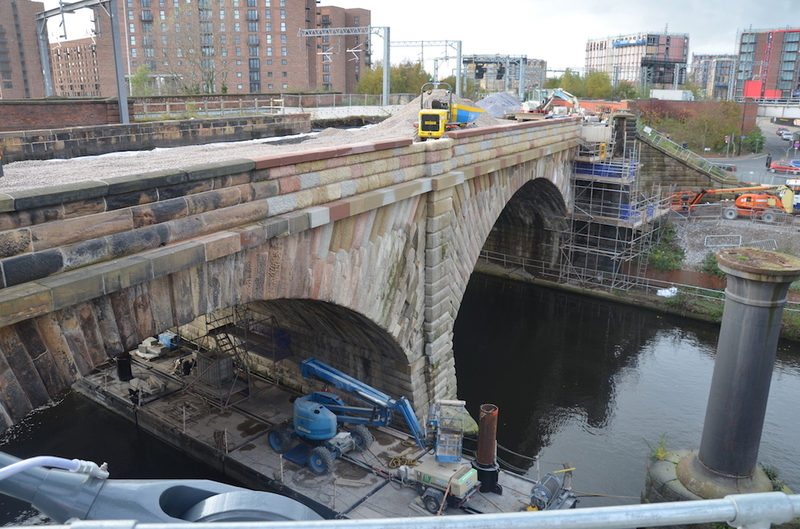 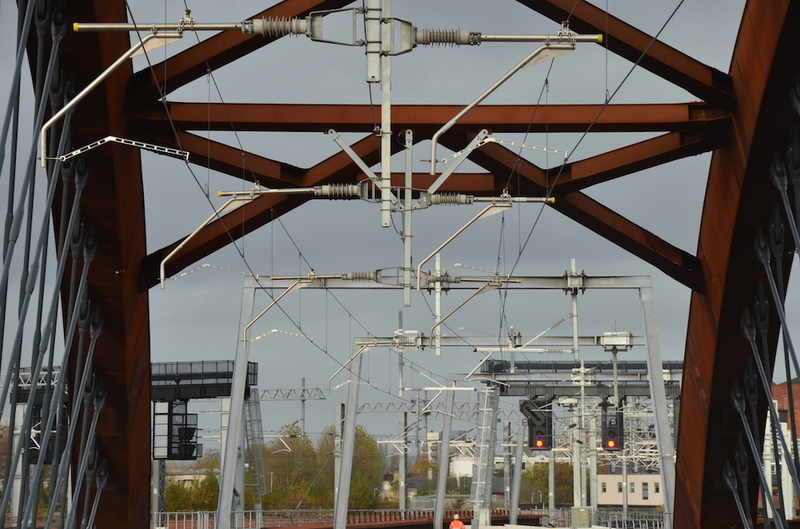 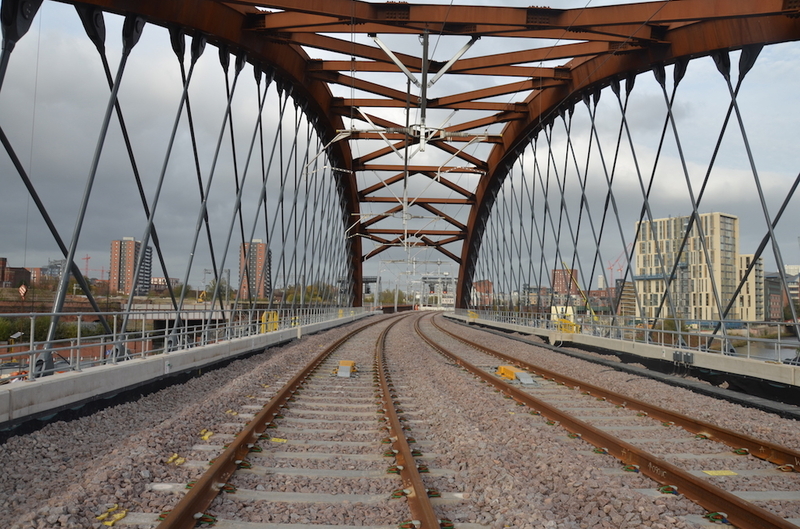