Fish. Delicious fish. Some form of marine life features on at least four of my top five memorable meals. We know that we should be eating a couple of portions of oily fish a week, and yet that target seems even more difficult than the 84 pieces of fruit and veg we are meant to eat per day. It’s so good for you that I’m thinking of starting up a petition to renationalise fishmongers and get everyone cooking fish for themselves again.

Mussels, for instance, are cheap and delicious; a bowl of moules marinières is easy, impressive and cooked in about ten minutes flat. But people don’t often make it at home because they don’t have either a local fishmonger or passing French person to help them debeard the mussels properly (preparing shellfish properly is one of those life skills that I suspect may form part of the Baccalaureate). While a fillet of salmon bunged in the oven seems do-able, anything that requires a bit of preparation, and worse, dealing with innards, is seemingly off the menu (I include myself in this).

It’s telling that good fishmongers prevail in Manchester’s foodie neighbourhoods: Chorlton, Urmston and Heaton Moor all boast fantastic fishwranglers. Easy Fish in Heaton Moor also has the bonus of a restaurant in the back of the shop, which was a good enough reason for me to visit one snowy Saturday. It’s a comfortable area with a modern feel featuring obligatory sea-themed styling, without being obnoxious or twee (even the soap in the loos is seaweed flavoured). 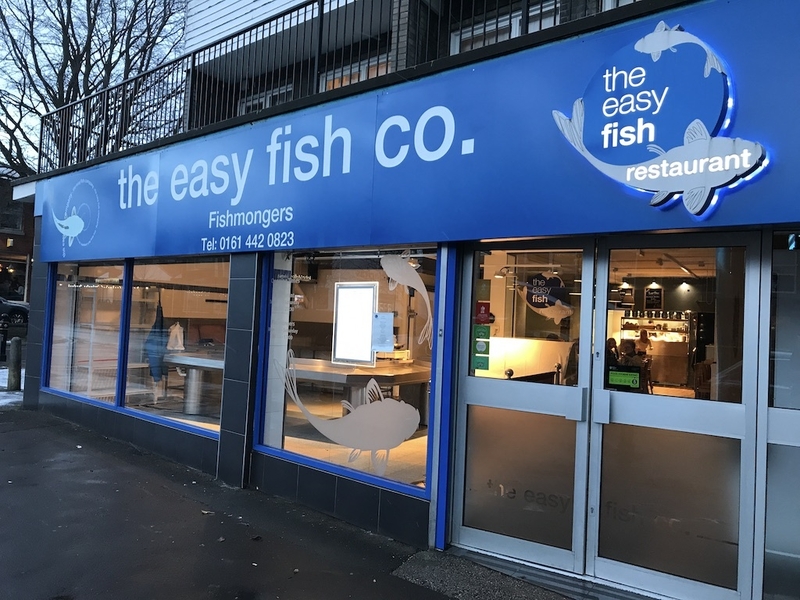 While mulling over the menu we decided to order a portion of Atlantic oysters (three for £7.50), just for the hell of it. Oysters are divisive. In fact, I texted a friend to find out what she hates so much about them. “They just taste like the sea with the texture of snot”. Hmmm, well tasting like sea I quite agree with, and in fact the snot part, though it wouldn’t be my phrasing, isn’t totally inaccurate. But for oyster-lovers the unfamiliar texture is part of the challenge, what makes eating bivalves as thrilling as it is delicious.

“But they are exhilarating!” I texted back. “Imagine a brisk stroll on the seafront on a rough day. The white-crested waves lift suddenly over the promenade and slap you in the face with a few hundred litres of Atlantic. That’s the kind of invigorating, rude-health tingle a good oyster should give you.”

“That’s not how I would describe them,” she replied. 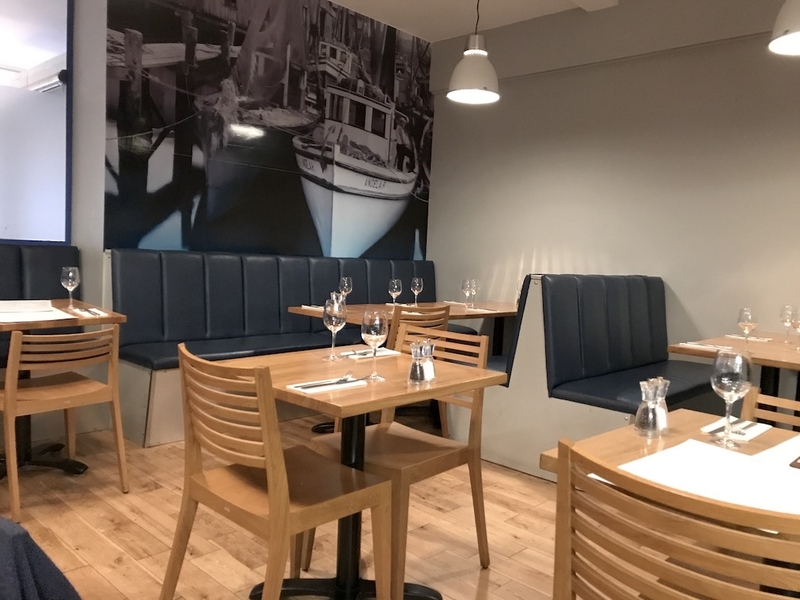 For starters we had prawns in chilli butter and coriander on focaccia (£9.50). What is it about massive prawns that delight the British heart so? Is it because it gives us a sense of triumph to wrestle these beasties into submission, a true measure of our mastery compared to those little pink niblets they try and pass off as prawns in the supermarket frozen aisle? Bathed in spicy, herby juices, these monsters were well and truly dominated. My only suggestion would be to serve the bread on the side for optional mopping, rather than on toast.

My own starter of scallops with wild garlic, peas and goats curd (£11.50) was also on the controversial side - fish and cheese is a notoriously tricky combo to pull off. Here the curds were mild and delicate enough to complement the scallops and fresh peas, though the overall effect was very soft.

For my main I had a classic bouillabaisse (£18.50) of which the most important part is the tomato-ey, fennely fish broth, which was deep and savoury, though I missed the golden burnish of saffron or the wild meadow perfume of thyme. The red mullet was sufficiently strapping, the mussels top-notch.

The hake special (£19.50) with mashed potato, mussels and samphire was a great success, being described, in pauses between mouthfuls, as ‘meaty’ and ‘delicious’. I managed to filch a few tastes and was especially impressed with the crisp finish.

As for pudding, the pear and almond tart (£8) was a little bit leaden, but the assiette of apple dessert (£8.50) was more enlivening. Case in point is the sour apple ice-cream, which tasted like the sort of thing parents banned their children from eating in the 90s (Nerds, if you need a specific reference). I also liked the green apple batons with a herby zing, while the mini-toffee apples were pretty cute too.

Money, or value for money, is always a difficult one to judge. On the one hand, in this country, we have been somewhat misled as to what it really costs to create quality food and support our home-grown industries (and fish, specifically, will be an interesting case study over the next few years). We need to accept that brilliant ingredients cost money, and Easy Fish is (pardon the pun) stuffed to the gills with quality produce.

On the other hand, I did feel that for the price bracket, it was missing a certain romance. There was an upbeat 2000-era RnB soundtrack of a tempo that said ‘hurry up before the next wave of diners arrive’, as a KP sailed behind me with a large black bin bag of lord knows what. Which is not to say the staff were ever anything less than charming, or in any way impatient, but at time it felt like we were eating in the middle of Tsukiji market.

Still, you gotta see the size of those prawns. MASSIVE.