Despite the rumours: 'The 'Wall' at Piccadilly Gardens stays

Jonathan Schofield updates with the news that was no news

Odd how these things take off. This week there have been lots of Manchester media outlets reporting that the Piccadilly Gardens wall was to be demolished. This half-information spread with glorious predictability across social media.

Writers should have read the news from the council properly, because there was only one new element from the information we had all received in January as we reported below which was published on January 15th. The council have now chosen to spend £1.8m in demolishing a tiny part of the 'wall', the freestanding element, which is less than one tenth of the main wall. Putting a sum of money in the public domain is the only fresh news.

Some of the £1.8m will then 'cover costs associated with the development of the scheme including concept design, survey and other preparatory work and gauging public feedback on outline plans.' £10m or more will be needed in the end. The council doesn't have the money so it 'will be working with principal property owners and other interested parties to develop a joint fund to enable the scheme to be brought forwards. This will include a significant further council contribution.'

The council leader Sir Richard Leese said: “This is a key step in the transformation of Piccadilly Gardens. We have been listening to people’s views about the area and we are determined, working with principal landlords, businesses, residents and property owners in the nearby area, to support changes to make it a thriving and welcoming place. We know we have got to start investing in the area now to deliver a space which meets the aspiration of the Manchester people."

Confidential is clear on how this can be achieved and our seven ways to improve the area can be read below.

The MEN by the way was an organ that headlined their article accurately. The rest did that thing of panic republishing the first half-arsed reading of the original release. Still, Councillor Jon-Connor Lyons being credited in the MEN with the campaign for change that led to the no-news of Wednesday sticks in the craw, this campaign started with Confidential more than a decade ago when we had a readers' walkabout at Piccadilly Gardens with Councillor Pat Karney. The campaign then became universal across residents and visitors with the council only belatedly joining in. 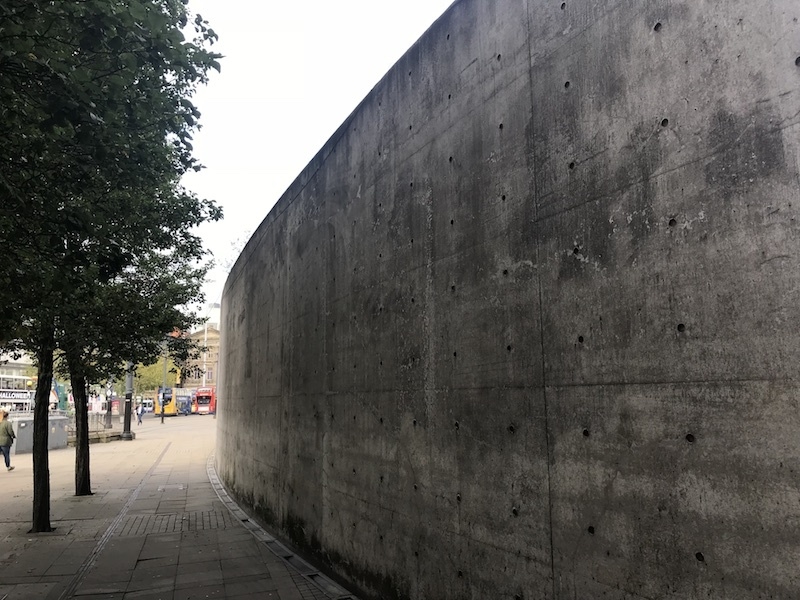 New plans are to be drawn up for Piccadilly Gardens. The design agency, LDA Design (Manchester) will lead on these. They were the same design agency behind the plans led by Legal & General which were considered ‘financially unviable.’

But weep, dear readers, if you think the mini-Berlin Wall and ‘pavilion’ in filthy concrete from Japanese architect Tadao Ando is going to bite the dust. It isn’t. It’s going to be softened not by a big wrecker's ball, as it should, but by plants.

Hello, tourists, how are ya' liking the scenery?

The Council want to ‘soften the appearance of the Pavilion’s concrete wall, transforming it into a green living wall.’ There is a good example of a living wall in Manchester, on the lift of Castlefield/Deansgate Metrolink, but the ‘living wall’ here won’t remove the Piccadilly problem.

The silly wall and pavilion is placed too far into the gardens area. It hems in the traffic-free part. It’s also difficult to see how that gloomy gap between the operators Tampopo and Caffe Nero in the ‘pavilion’ can be ‘greened.’

The best thing would be to open up the space by complete demolition. The reason for the wall in the first place, back in 2002, was to create a discreet area for the Gardens away from the trams and buses. It was a rubbish idea. Trams are quiet and the buses are on the other side of them, away from the Gardens. St Peter’s Square copes with both just fine. Let Piccadilly breathe. Sadly the Council don’t own the ‘pavilion,’ which meant demolition wasn’t even going to happen with the Legal & General plan. Get a Compulsory Purchase Order then. Get rid.

The tiny free-standing part of the wall, on the Primark side, is owned by the Council, and that will be demolished. That’s a gesture, nothing more.

Elsewhere, the press statement says, ‘The Council would like to keep many of the core elements of that original (Legal & General) scheme including new planting, improved lighting and design to help deter anti-social behaviour, raising grassed areas and re-laying paths to repair the damage areas. Critical to the proposals will be the creation of a more family-friendly area with an improved children's play area and removing and/or replacing existing street furniture.’

More grass retention then. More grass to replace every year even when it's part artificial. For at least five years during the present rebuild of Manchester Town Hall and Albert Square events - such as part of the Christmas Markets and Fair - will squat on the grass, killing all the natural elements. It then takes weeks for the Council to fix the grass and so the largest public area in the city centre looks even more of a mess then it usually does. Hello, tourists, how are ya' liking the scenery?

One positive is the plans will also take in a wider area than the previous scheme, expanding the area under consideration to include the section of Piccadilly to the north of the gardens, Parker Street to the south and Mosley Street to the west.

That's good. What has been hilarious though, with the recent news, is the image sent to us in the Council press release. And the reality. Compare and contrast with the two photos below. Oh that lovely grass eh?

If Confidential had been appointed to make changes then here’s our list (other than getting rid of the wall, which seems a non-starter). Some seem to be part of the conditions for LDA Design most don’t.

1. Rename the whole area Manchester Square. There are no longer any real ‘gardens’ there, and the title essentially seems a tactic to confuse our increasing number of tourists when they go searching for these alleged ‘gardens.’

2. Get rid of all the grass and make the whole space hard surfaced with lots of trees and seating, just like St Peter’s Square, which is a dignified, coherent success (albeit with a couple of tramlines too many).

3. Get rid of the odious high planters on the Oldham Street side. These create anti-social spaces behind them, are aesthetically a disaster and cramp up the main open area.

4. Give more emphasis to the Victorian statues – this should be largely achieved with point three above. Floodlight them at night and put up some explanation of why they are.

5. Remove the present fountain and/or make it flush with the new surface of a new square, so the kids can still play in it. Particularly, remove the clumsy space-eating walkway through the fountain with its heavy fencing. On the north west of the walkway, remove the trench-like continuation of the fountain that never produces water at all but seems popular with pigeons. And litter.

6. Replace the children’s play area so it doesn’t look as though it was bought for the garden of a country pub via a B&Q package costing £567.

7. Make sure the public pocket parks we have in the city centre are immaculate: Sackville Gardens, Parsonage Gardens, Cathedral Gardens, St John’s Gardens. This will make up for the loss of the grass in Picc Gardens. And don't do any events in these gardens that will kill the grass, deliver a coup de grace, so to speak.

That should do it. Not that we will get our way.

There seems a weird nostalgia in the Council about holding on to the title Piccadilly Gardens, when it is in no way a gardens. At the same time there’s a stick-in-the-mud attitude (literally) with retaining the endlessly to-be-replaced grass areas. These are unsightly three months of the year. Ridiculous.

Sir Richard Leese, Leader of Manchester City Council, said: “We know that Piccadilly Gardens is a major issue for a lot of people which they have strong views about. We are committed to funding and bringing forward a scheme which will both improve its appearance and help make it more of a welcoming, family-friendly space. We look forward to sharing further ideas and details with the public and having a conversation on how best to improve the gardens as soon as we are in a position to do so.”

That’s lovely but with a reduced budget, given Legal & General thought the original scheme was 'financially unviable', the end result is likely to be more of the endless fudge and failure that besets these so called ‘gardens.’

The well-respected organ Architects' Journal (AJ) has reported here how: 'LDA was chosen by Manchester City Council to produce concepts for the £2 million of improvements to Piccadilly Gardens – a snip compared to the £10 million price tag for L&G’s planned overhaul.'

If so, we thought at Confidential, then LDA has five times less of a budget. They are going to be the best ever at getting a quart into a pint pot.

£2m won’t do it. It's scratching the surface and God you don't want to do that in Piccadilly Gardens. The budget for the new Robata Grill and Bar Mosu in the former Circle Club space under the Barton Arcade is £2m.

So we rang the Council and they said they had no idea where that £2m figure has come. The writer of the piece in the magazine was Will Ing. So the question must be, was he making the figure up, has he got an inside source somewhere...or was he just showing will ing?

The Council have now informed Confidential they have requested AJ to remove the £2m figure. It's misleading because, although no actual sum has been released, we understand it will be substantially more. Confidential hope it'll be at least three or four Robata Grill and Bar Mosus more.