The Northern Quarter is now so swathed in street art that it's hard to imagine that at one time organisers had to press Manchester City Council to allow artists creative free rein in the area.

But press they did and arguably the Northern Quarter's reputation is down to the foresight and tenacity of those who saw it as a modern urban canvas.

Street art isn’t all about the walls, as impressive as they might be. One of the original pieces that set the tone for the area was a ceramic poem set into the pavement of Tib Street that fired up the imagination of anyone who had time to look down.

The poem was Flags by Lemn Sissay and over the years the ceramic letters wore away to create a new piece of found poetry, full of gaps and mystery.

The piece was originally part of the Tib Street Trail, a public art trail designed to encourage people to rediscover the Northern Quarter, which at the time had suffered significant decline.

Now the poem has been restored in full, with a new version written specially by Lemn and cast in iron for increased durability. The restoration has been supported by Manchester City Council, Bruntwood and the Arts Council.

A special font, cypher, was designed for the original artwork by Tim Rushton, who has worked across a wide range of disciplines including typography and illustration. It is fitting then that Tim was commissioned to recreate the artwork, but this time in durable cast iron.

Tim said: “In the last couple of years it has become obvious that Lemn Sissay’s poem Flags on Tib Street has finally become past reasonable repair. After 20 years in an increasingly busy Northern Quarter, a permanent solution was going to be necessary. General wear and tear, scaffolding pole drops and souvenir hunting has rendered it very patchy. Cast iron panels employing the same bespoke NQ typeface would be the solution. Lemn was contacted and decided to create new version of Flags for the project.”

Durham Foundry, a company in Sheffield, was identified as the manufacturer most likely to be able to undertake the task and they offered to do a trial casting to see if a new method of pattern making could be employed for the project. This method enabled Tim’s typeface, the one that is used elsewhere in the NQ, to be cast for the panels.

Lemn’s revised poem was typeset in this form and the trial casting was a success. Production went ahead and after just one minor production hiccup (metal casting is more art than science), the panels were delivered to Manchester.

Hayley Flynn, who runs alternative art tours of the Northern Quarter, was an integral part of the process of restoring the poem. She told us: “It's something I've talked about for a long time now, the poem forms such an important part of the modern history of the Northern Quarter and there've been various ideas and collaborators interested over the years in making it happen.

"Ultimately, all I've done really is to champion its restoration. I was able to facilitate a partnership with Bruntwood Works, knowing their cultural reputation with events like MIF and their connection to the poem through Afflecks. In the case of the old tiles - after summer I'll be a lot more hands-on with what comes next for them, but you'll have to wait and see about that!”

"It's been 24 years since they were originally laid, they've been in a bad state for quite some time. It's highlighted the issues over the upkeep of public art and the idea of recasting them in iron was something that had been talked about for a while. It goes with our lovely industrial iron curbs, it's durable and Tim has worked with the material elsewhere in the area (the Soundbites pieces on Oldham Street).

"I think it was serendipity that it actually happened now, all the right people at the right time were mobilised to make it happen and then it's been a really positive partnership between all the artists and supporters.” 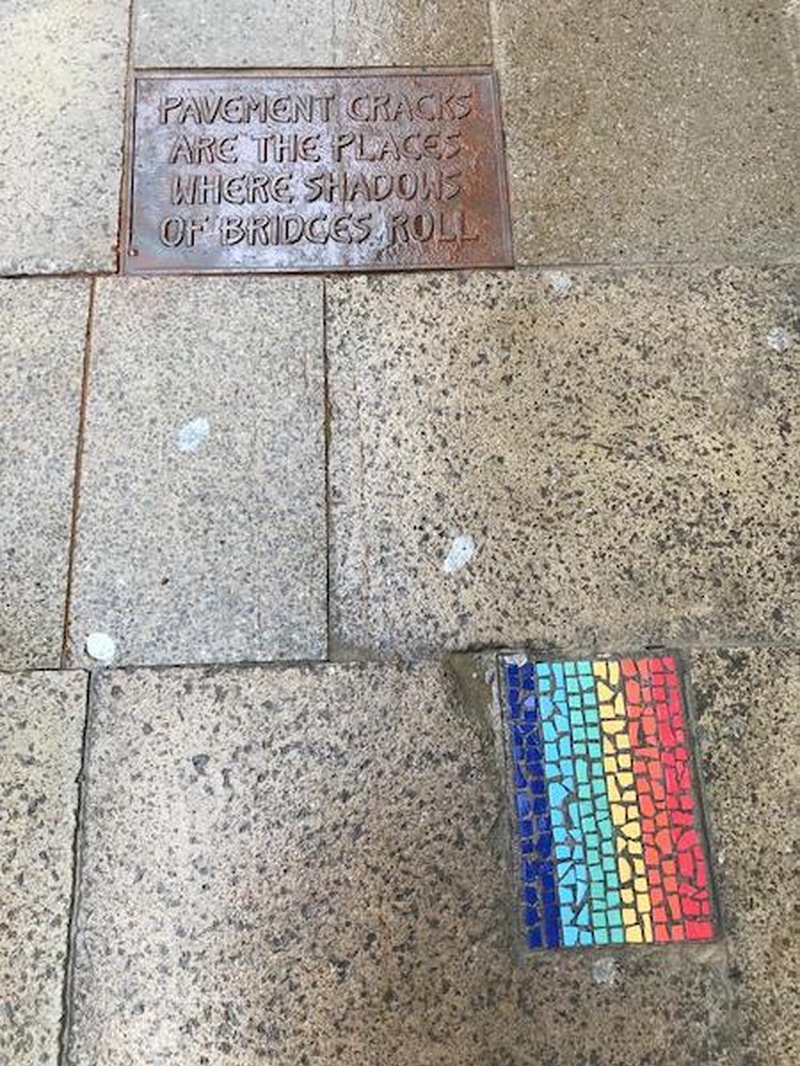 The tour reveals the story of the poem’s origins, and how the public art trail it helped form became the starting point for the transformation of the area briefly named the Eastside but now known as the Northern Quarter. Participants will discover the parts of the trail that remain, look for the ghosts of those parts that have left us, reveal the previously undocumented stories of the art beneath our feet – and show how art can spark a neighbourhood into change.

Flags by Lemn Sissay - the new poem in full

Verses to catch the

The dust of the

The cracks the cracks