Dionisos - A New Greek Restaurant For The Village

‘The Greeks are coming’ might have meant bad news for some, but it's good news for Manchester's Gay Village

DIONISOS, the international Greek restaurant brand, plans to open their first UK venue in the former MCR42 site on the corner of Chorlton Street and Richmond Street later this month.

The small chain of Mediterranean restaurants was created by Ioannis Golias who opened the first Dionisos in Barcelona in 1993. He wanted to offer high quality Greek cuisine which combined local traditions with modern tastes. Twenty years later, the brand is well established in Spain with further branches in Madrid, Valencia and Mallorca. They’re now hoping to bring some sunshine to Manchester’s Gay Village. The restaurant group is named after Dionysus, the ancient Greek god of the grape harvest, winemaking and wine, of ritual madness, fertility, theatre and religious ecstasy... so they should fit right in.

The kitchen manages to recreate the distinctive flavours of Greece by almost exclusive use of authentic Greek products. Typical dishes include Greek salad with feta and native olives and charcoal-grilled meats such as Souvlaki (still Greece’s favourite fast food) wrapped in pitta bread, with fresh tomato, onion and lashings of tzatziki. Dionisos will also specialise in platters of traditional Greek sweets, pastries and desserts such as the famous baklava and various other honey, pastry, nut combinations. As well as the full main menu they will offer a more casual dining option for breakfast, lunch or for those in a rush. Some dishes will be available for take away and they are also planning to set up delivery options. 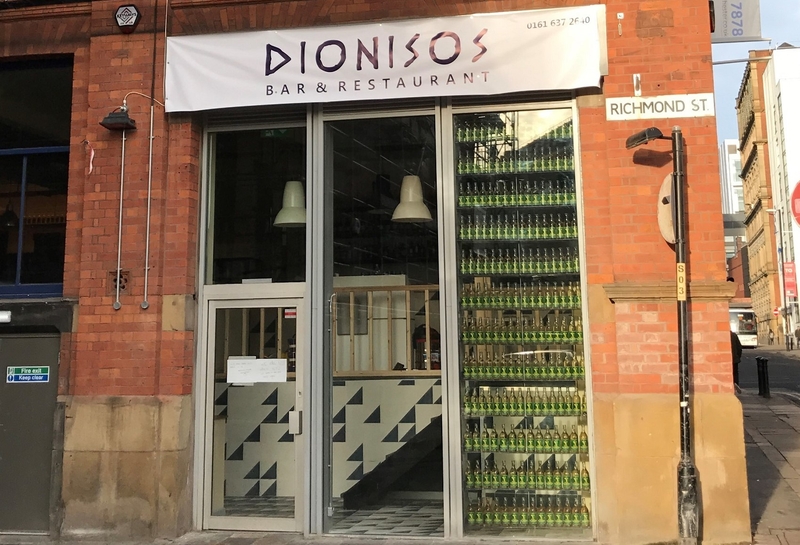 Thanks to a major refurbishment, the corner site has been transformed into a modern taverna from the classic blue and white theme tiles to the whitewashed brickwork, wooden chairs, distinctive tiles and decorative jugs of wine. Drinks will be Greek themed to include some house beers, local wines and of course a bit of Ouzo and Retsina to help put you in mind of misspent holidays of your youth.

Manchester’s Dionisos will be run by father daughter team Pana and Valentina Chatiras. Alongside the main restaurant, the pair have applied for a late night license for the sizeable basement area. In the Greek festive tradition, they are planning a variety of lively events from live DJ’s to open mike and comedy nights.

Dionisos will open next week for a soft launch featuring a buffet to introduce themselves to the neighbourhood, before launching fully around the third week of February.