'Insta-wholesomeness in the heart of studentland' - Milk and Honey, Oxford Road, reviewed

I’VE expressed surprise before that there aren’t more trendy cafes clustering up around the Oxford Road university campus area.

After all, here is a huge concentration of people with a disposable income, who care about how things are presented and have the time to drink endless cups of almond milk dirty chai latte: it’s an instant goldmine.

So it’s no surprise that Milk & Honey, slap-bang in the heart of studentland, is very definitely targeted at your average social-media addicted nineteen-year-old. Only this isn’t the brainchild of crafty developers taking advantage of a captive audience. Instead, it's a vegetarian, volunteer-run, community-focused café that unquestionably belongs to the Light Side of the force.

When I visited last Saturday, I sidled up behind a trio of glowingly gorgeous young women, who are ordering take out veggie bean pots and asking the cashier if he’d like to come along to their gospel concert. “It’s going to be lit” one says, and I realised I’ve never heard anyone use that terminology without a heavy layer of ‘I know I’m too old for this but what the hell’ irony.

Irony, on the whole, is not a good fit with the Milk & Honey philosophy. A quick explanation: Milk & Honey is the café of St Peter’s House Chaplaincy, which services the Manchester Universities and RNCM. The café is not-for-profit and has charitable status and, as well as serving up generally wholesome food that you can wager is ethically and sustainably sourced, also does lovely things like host community groups, and drop-in sessions for people to have earnest chats about the issues of the day. The ‘Milk & Honey’ tag comes from the bible verse which describes the Promised Land as overflowing with good things.

Perhaps the only drop of irony here is that it is very vegan-friendly.

Milk & Honey is not only feel-good but it looks good too, in a very Instagrammable, vintage bits and bobs, strings of fairy lights kind of way. In fact I get a little bit carried away while working and start snapping pictures of my coffee with laptop open, living my best blogger life. Then I remember I’m in my 30s and that blogging is so three years ago anyway, so I go back to what I do best, which is eating.

I picked the trio of salads (£6) which was made up of a panzanella, a cold buckwheat soba noodle salad with courgette and fennel and a raw option which is basically a fancy slaw. The panzanella was a knockout, the buckwheat soba was ok but not as interesting as I was expecting (though did add a useful heft) and the raw was, well, raw. So by averaging out the three I ended up with a perfectly good if not mind-blowing salad.

It doesn’t look particularly enticing in photos, like a bread crocodile burping a spinach leaf...

I actually love that attitudes towards salad have changed so much recently. A well-constructed salad is a beautiful thing if you get it right. But until recently we seem to have been satisfied with a pillow bag of leaves, a couple of flaccid tomatoes and some red onion for the adventurous. So it actually gives me a perverse sort of pleasure to be able to nitpick over this particular example, with its trendy ingredients, and muse over whether I might have also included a sprinkle of toasted almonds or some freekeh.

The menu is quite limited, so I also tried the mysteriously named Special B (£5), which was a flatbread stuffed with spiced chickpeas, a coriander dressing and pickled red cabbage – simple but very delicious. It doesn’t look particularly enticing in photos, like a bread crocodile burping a spinach leaf, but it’s something I’d come back for. Hopefully the other specials (which change daily) are as good.

Where I really came to showing my age was the pink smoothie bowl (£3). Is it… fruit soup? Do I eat it with a spoon? Unnerving. It tasted good - being made of strawberries and pineapples and sprinkled with seeds how could it not - but I think I’ll stick to my smoothies in a glass (with reusable metal straw naturally) from now on. The cakes here also look good, with brownies and flapjacks being very well represented.

Milk & Honey also has a really decent range of events. This week alone has seen Breakfast Yoga (a yoga class that finishes with a group breakfast all for the bargain price of £4 if you are a University of Manchester student, £7 if not), a talk from a beekeeper and a brainfood class, where the chef cooks up simple salads and smoothies to boost energy and improve focus. It has its own mini-allotment for goodness’ sake.

The food here is healthy and well-priced, the atmosphere is chilled and the ethos is, if I may borrow a phrase, totally lit.

What you say
Got an account? Login, to comment/rant.
0 Opinions
Read Next
● / Fine dining 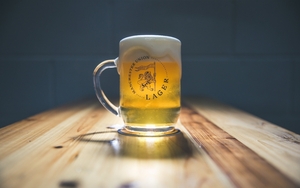 Who fancies winning a lifetime supply of lager?
● / Latest Reviews