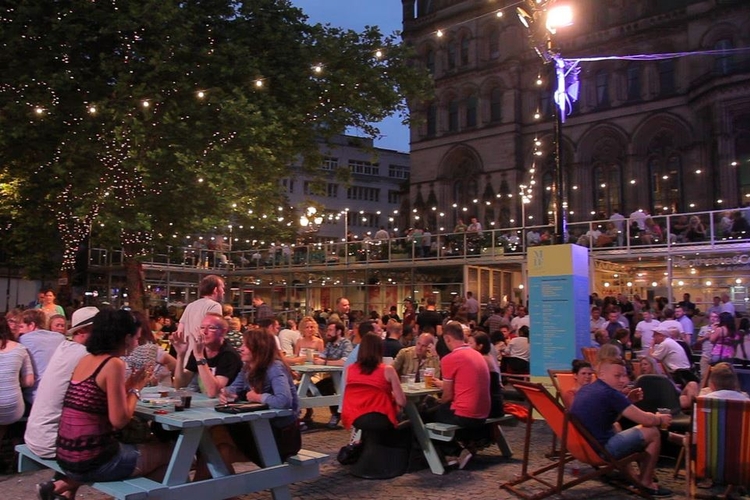 "I’VE learned a huge amount from Kim Kardashian, on a genuine artistic level." Manchester-based poet and playwright Leo Mercer isn’t afraid of making unusual connections. From indie-pop musicals set in coffee shops to Mozart operas rewritten for reality-TV stars, if two things exist in the universe he will find a way to tie them together.

His latest project, echo chamber, soon launching as part of Manchester International Festival's (MIF) ‘Festival in My House’ series - is a string quartet, but of course it’s not quite as simple as that. For one thing, their repertoire is on the eclectic side, covering 700 years of musical history and ranging from medieval plainchant to Kanye West. For another, they will play in your living room.

Mention ‘house gigs’ these days and the first image that comes to mind is likely to be sweaty punks making a racket in someone’s basement. But musical performances in domestic settings have a rich history, encompassing everything from the Schubertiades of nineteenth-century Vienna to the unassuming cockney knees-up. It was only with the advent of recording technology that the various traditions began to decline, with live music becoming increasingly the domain of professional players and dedicated venues.

The classical world in particular grew ever more exclusive and forbidding, with a formality and an emphasis on technical perfection that leaves many people cold. Leo is one of these people. "I have this sense that it’s a very dead culture, and the reason is you’re not allowed to be creative with the music. What I found myself craving is bad performances, biased performances, things that are actively skewed, because you don’t get that on a recording."

The concept – at least the playing in the living-room part – came from an organisation called Groupmuse, founded in Boston in 2013. ‘They pioneered this idea of house concerts,’ explains Leo. ‘They’ve got this app. So you have a space, you want a quartet. Click, a quartet comes, plays in the space.’ Having already decided to put together an ensemble for his musical-theatre projects, Leo saw an article about Groupmuse and realised ‘this is our thing’. Another app, Encore, which Leo describes as ‘LinkedIn for musicians’, also played a key role. The final logistical challenge was finding places to play, but this was easily dealt with. A call for venues, sent out over social media in late December, immediately met with dozens of responses. ‘We’ve got eight places on the UK tour. Which is enough to be going on with!’

Just as important as where to play, however, was what to play. Here, Leo introduces an idea he calls the ‘Spotify principle’. ‘My ears, without realising it, have had a training in jumping between genres via shuffle. Programming pieces of music should track massive shifts of genre, because we can deal with that.’ The programme consists of six pieces. The first is an arrangement of the plainchant ‘Viderunt Omnes’ by thirteenth-century composer Pérotin. This is followed immediately by Jimi Hendrix. ‘What’s important about that is the idea of a musician as a performer, whereas if you go and see an orchestra, it’s a bit like watching someone at an office job: they’re at their desk, their company manager is conducting them. Nobody has the freedom to express their vision.’

Next is Schubert, the only ‘classical-classical’ composer in the programme, and someone who’s closely associated with the chamber-music tradition. Long before his canonisation as one of the great composers, Schubert was a jobbing music teacher and songwriter, known for playing gigs in friends’ houses. Nicknamed ‘Schwammerl’ (mushroom), he was five-feet tall and plump – pretty much the antithesis of the physically imposing Hendrix. ‘It’s amazing, actually,’ says Leo. ‘The end of the Hendrix piece and the beginning of the Schubert is a perfect merge, a perfect segue. There’s an intense build and then the Schubert just goes…’ he makes a gliding motion with his hand and lets out a noise that’s difficult to transcribe, something like ‘Zschwzzzzz’. His expression is blissful.

The rest of the programme consists of pieces by Arvo Pärt (a previous Manchester International Festival contributor - see here) Bryce Dessner and, most eye-catchingly, Kanye West. Pärt is the world’s most frequently performed living composer, known for his religiously inflected minimalist compositions. Dessner found fame as guitarist of rock band The National, but also writes music for classical ensembles. Leo regards him as something of a role model for being ‘unafraid to be in a massive indie band and work in classical as well’. As for Kanye, ‘If you’re looking for a contemporary non-classical artist who’s forward-thinking, he’s genre-bending all the time. The piece of his we chose begins with a very classical interlude, but then it turns into one of his big hit songs.’

Though clearly excited at the prospect of programming Schwammerl alongside Yeezy, Leo has some qualifications. ‘What we don’t want is for it to be like, “Oh look! We put Schubert next to Kanye!” If it’s good music they will stand next to each other because it’s good music.’ All the same, he recognises the value of a gimmick, particularly when it serves as the basis for something more sophisticated. ‘Everything I do is the thing that would be a gimmick, unless you do it in that 1% possibility way. A Mozart opera about Kim Kardashian should be the gimmickiest thing on the planet. Everybody should think so – that should be their first thought. And then it’s my job to show that, actually, Kim Kardashian is the future of classical music.’

The echo chamber quartet, consisting of Stephen Bradshaw, Sophia Dignam (main image), Beka Reid and Chris Terepin, will soon be launching as part of Manchester International Festival's ‘Festival in My House’ project. A UK tour will follow in March.