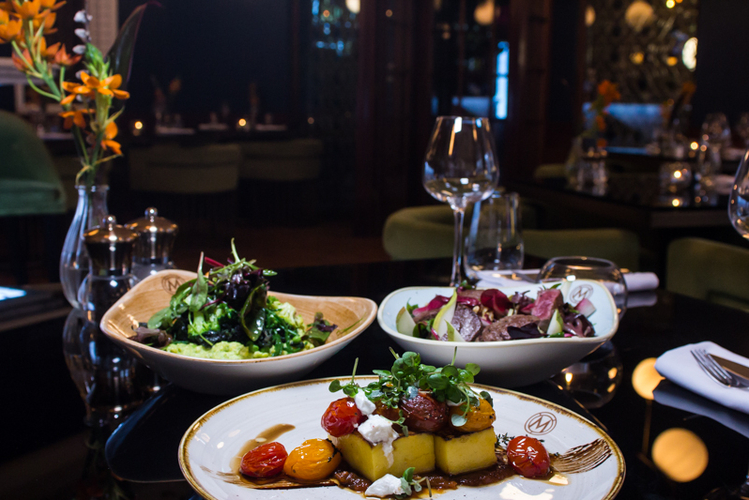 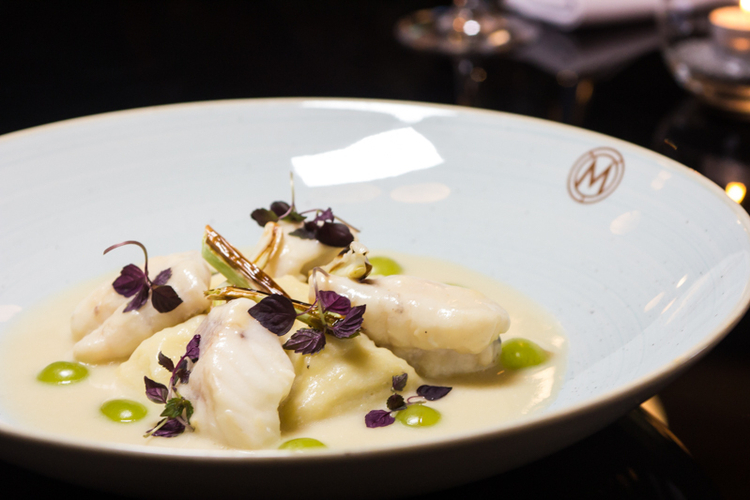 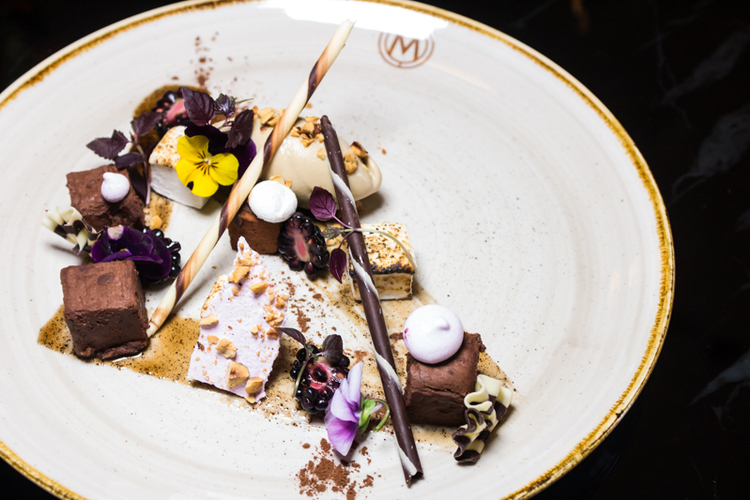 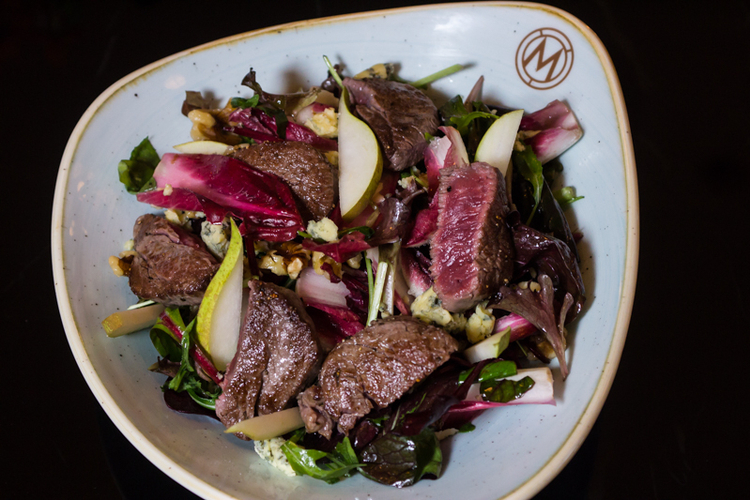 IF I could gut my living room and start again from scratch, I'd make it like look like Masons. It's the sort of place where you start shopping with your eyes as soon as you sit down. I want that gold drinks trolley. I want that mini succulent in a pretty jade pot. Dammit, I even want that rustic ladder leaned artfully against the wall. I don't care that I'll have to watch the telly through the rungs.

I mentally plan my home makeover while knowing full well it's not mere accessories that make a place look this beautiful. Masons is in the neoclassical Manchester Hall where the Freemasons used to practise their secret handshakes. The interior designers have walked a tasteful line between its original 1920s features and a modern day mood-board style.

And although its aesthetic is beyond my budget, the food is a different matter. I'm delighted to see I could eat here even if I was paying for it.

While the monkfish was all grace and quiet restraint, this dessert was pure, unashamed craziness, of the best possible kind.

I'll start with my least favourite dish to get it out of the way. Called 'Lean & Green', it was something I'd never order by choice, because I'm not vegetarian or on a health-kick. (Okay, I am on a health-kick but only in my head, not in my actions).

It was a bowl of whipped mint polenta topped with charred greens. To me, it felt like someone had made me a Sunday roast and forgot the chicken.

The polenta was smooth and spoonable, like a creamy, minty mashed potato. The veg put on a good show: if this medley of charred broccoli, samphire, watercress and radish was a salad or a side, I'd be more than happy. But as a main, no.

That said, my dining companion scooped up the polenta like it was Ben and Jerry's and said this was her favourite dish of them all. She's also on a health-kick but hers goes beyond good intentions into real-life.

Our second dish from the £9.50 lunch menu was much more 'me'. The Steak Salad was medium rare strips of soft fillet steak, tangy bites of Stilton, crunchy walnuts, crescents of pear, and a bed of chicory and radicchio in a light vinaigrette.

It's not as 'lean' as the polenta but it's not bad as a high protein, low carb lunch. And it'll make you happy as well as healthy because those bold, contrasting flavours, all in one dish, are superb. The lunch deal also includes a drink: a wine, pint or something softer.

After Polenta Dish One divided opinion, Polenta Dish Two was a hit with us both. The Grilled Herb Polenta (£7.50) is a starter on the new a la carte menu. It showed how this beige-tasting grain can work brilliantly in the right context.

Here it was the calm in the eye of a storm, with force-ten flavour coming from the goats cheese curd on top and the roasted tomato chutney beneath. The whole roasted heritage tomatoes were their own little hurricane, bursting into tangy juiciness at first bite.

The second a la carte starter was a Prawn Cocktail (£9) unlike any prawn cocktail I've seen before. It was horizontal not vertical, for a start. And it had little cubes of vodka jelly in it. (A delicacy I last had on a package holiday in Malia when my friend got alcohol poisoning from the fish bowl cocktails.)

You couldn't taste the vodka (probably for the best) but the rest of it had plenty of character. Plump charred king prawns, avocado purée, translucent moons of radish, and a scattering of lemon balm. A side of artisinal toasted bread completed this winning dish.

Next was a main of Monkfish Veronique (£24). This was a very elegant creation, possibly aimed at older, richer people than me. The monkfish was tender and generously portioned, sitting on top of puréed potato, with charred baby leeks on top, in a sauce of cream and Vermouth. The all-white colour scheme gave it a sophistication echoed by the taste. Classy, like Masons itself.

And then they brought out the Espresso Martini dessert (£9) and I wondered what kind of Jekyll and Hyde chef was at work here. Because while the monkfish was all grace and quiet restraint, this was pure, unashamed craziness, of the best possible kind.

This dessert had everything. Squares of chocolate marquise, coffee-toasted marshmallows, tiny pink meringues, big juicy blackberries, chocolate straws, espresso ice cream, and this addictive crunchy toffee crumble hidden beneath it. I think I even tasted some Turkish Delight in there too. And yet it wasn't too rich or too sweet. How that's possible, I don't know.

With this hedonistic head-trip of a dessert, lunch was complete. The cooking at Masons is on a high – and that £9.50 menu is excellent value for money, possibly the best in the city. I'm going again, and not just to steal the succulents.

See the a la carte menu 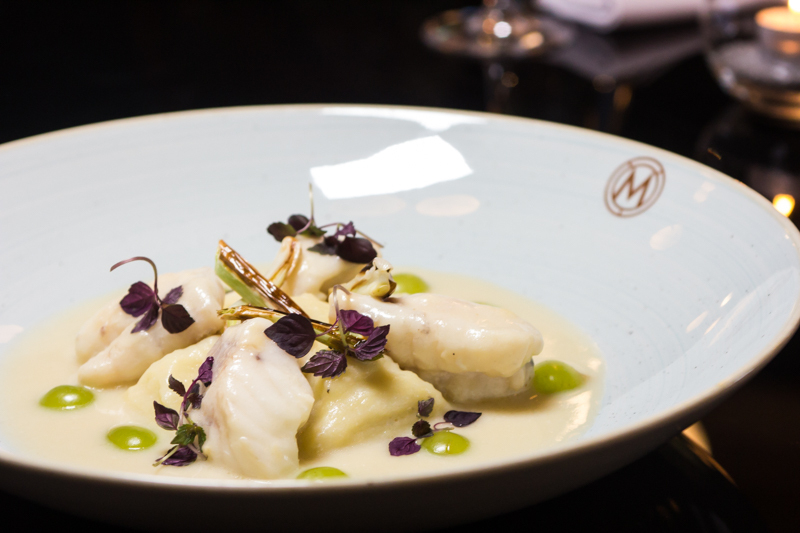 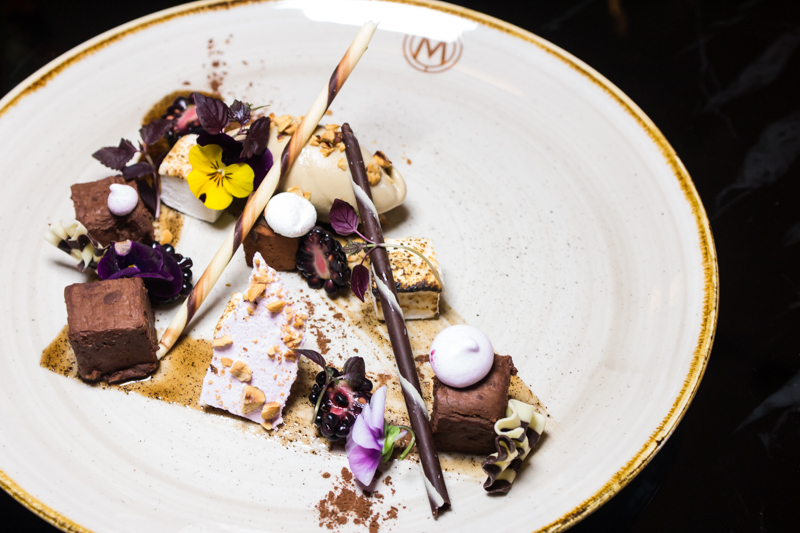