It's no secret that Greater Manchester doesn't get a lot of sunshine. With the pandemic highlighting the benefits of an outdoor bev, people have been hustling for a slice of pavement action more than ever. On a rare sunny Mancunian day day, the usual suspects in Spinningfields are packed. Finding a less-obvs spot in the sun might involve a bit more lateral thinking but the rewards are worth it.

Here’s our guide to some of the outdoor drinking spaces you may have missed. Ah the summer of 2018, what a time to be alive. Non-stop sun for four months and nothing but good vibes – at least that’s how I remember it. Football was coming home - or it was for about two weeks. After England qualified for the quarter finals with a dramatic penalty shoot out win versus Colombia, World Cup fever spread across the nation. With the next game set for a Saturday afternoon and temperatures set to hit 30, the race was on to find an outside spot showing the game. Manchester Council hadn’t arranged any large outside screens for fear of public disorder - although they reversed this for the semi final - so it was pubs and bars only if you wanted to watch in public. Wracking my brains for an outside space that might have a TV, I remembered a nondescript pub on Beech Road in Chorlton. Inside The Beech Inn is as normal as a pub can get, with a normal drinks menu and normal prices. But out back it was better than I ever could have imagined. Seats as far as the eye could see and a TV screen at every angle. OK I’m exaggerating a little but it’s a very big beer garden with lots of places to sit down. Ten of us perched in front of a TV in the baking heat and watched as the garden filled up around us. England won and el vino did flow. What a day, what a beer garden. 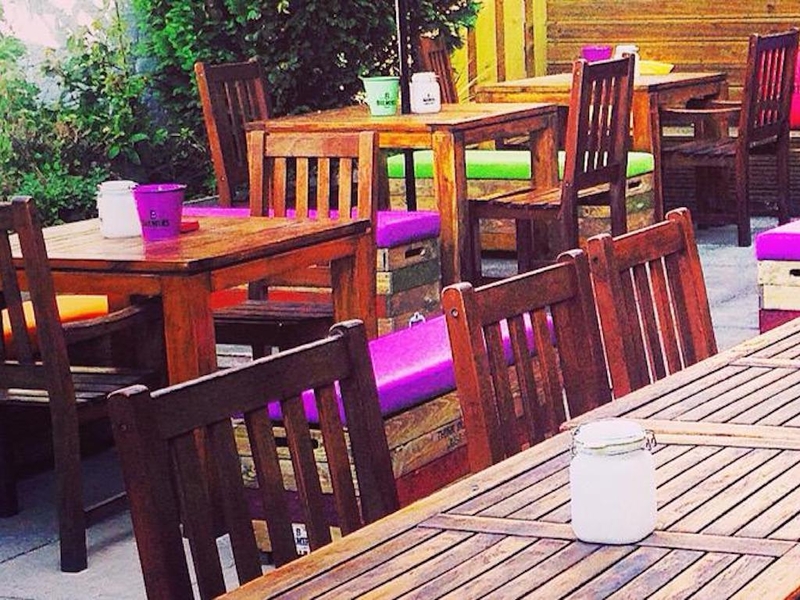 One of Manchester’s oldest pubs, The Briton’s Protection has been plying the city’s population with booze since 1795. Known as the pub of choice for whisk(e)y aficionados, it boasts well over 300 of them. This place has seen many sights down the years, not least the Peterloo Massacre of 1819 when pro-democracy supporters from across the North West gathered at a mass rally just metres away. In an attempt to stop speaker Henry Hunt from addressing the crowd, the king’s forces clashed with protesters and hundreds of people were brutally cut down. Of course, you know all this, but what you may not know is that The Briton’s Protection also has a splendid little beer garden around the back which often eludes the drinkers occupying the numerous nooks and crannies inside. Surrounded by murals commemorating the pub’s past and with a rare lack of buildings towering over it (for now), it gets sun for most of the day. It’s an ideal spot to sit with a tankard, contemplating the rich history of your surroundings 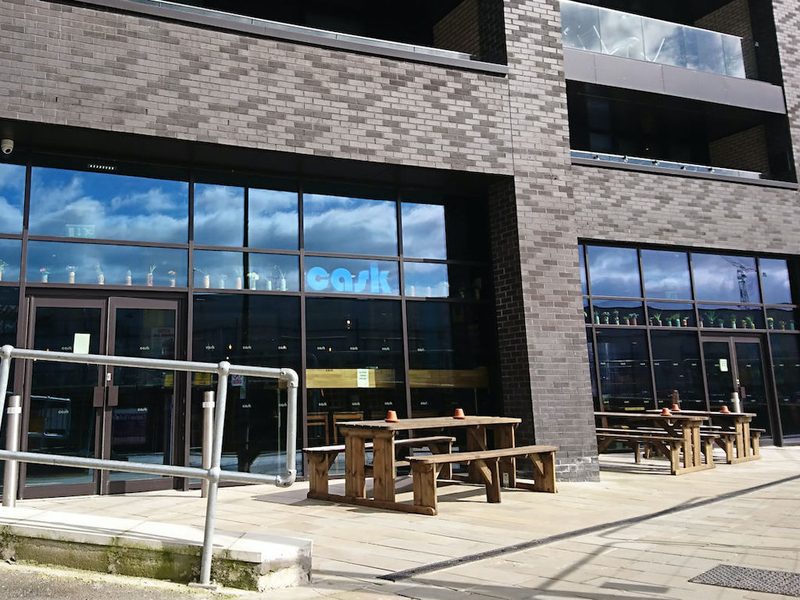 Liverpool Rd institution Cask opened its second site in Ancoats in November 2018 and it still remains somewhat of a secret by city centre standards. It’s got the massive world beer selection and friendly service the original Cask is known for but also a rather fetching terrace out front to boot. It’s Ancoats enough to get the cool vibes but peripheral enough to actually be able to get a seat on a Saturday lunchtime. Perched on the corner of the New Islington Marina it’s the perfect place to drink New England IPAs and watch the world go by - all without the hubbub and miniature dogs of Cutting Room Square. 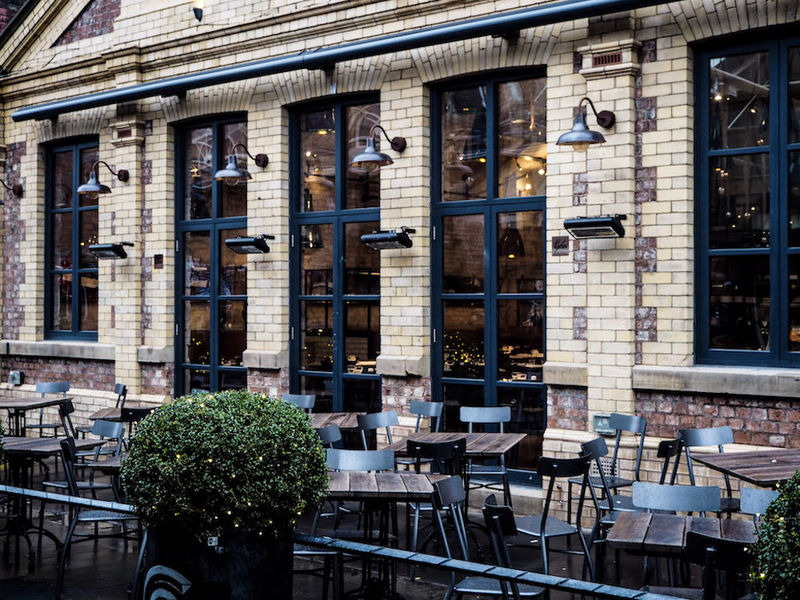 Opening in the former Working Men’s Conservative Club in 2017 The Con Club Restaurant & Bar has become integral to Altrincham’s bustling casual drinking and dining scene. Located next to the equally popular Altrincham Market, it’s the venue of choice for yummy mummy brunches and Friday night catch-up scoops with the boys. Its spacious front terrace is no secret and seats are snapped up the second the sun comes out. It's ideal for sitting outside with a poke bowl and a pint of Camden watching people overspend on pot plants and artisan cheeses at the market across the way. Lesser known is the Con Club’s upstairs roof terrace. Located just off the upstairs bar and function space this sun trap offers comfy booth seating and DJs at the weekend. It’s the same Con Club food and drink experience but without having to watch your friend’s seat like a hawk when they nip to the loo. 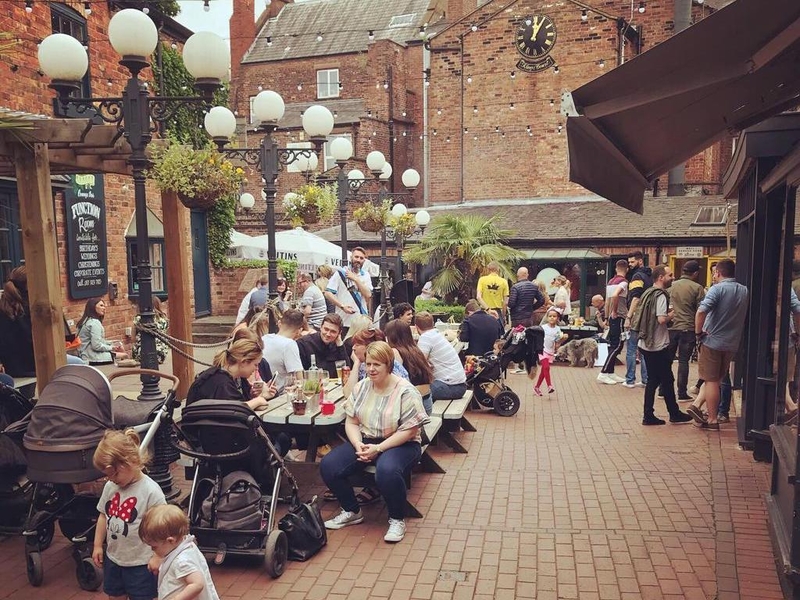 Whilst Altrincham Market and its surrounding restaurants and bars have rightly received plaudits for rejuvenating Altrincham’s nightlife, there is another food and drink hub quietly going about its business that is really starting to come into its own. Located down an alleyway just off the main road, King’s Court was little more than an empty yard a couple of years ago but it’s now a bit of an indie food and drink haven. Food and drinks can be taken from any of the units to one of the available benches in the communal courtyard space. There are no less than seven businesses operating around King’s Court including The Cheshire Tap, craft beer and football bar Libero, sandwich shop Batch Deli, Batch Bottlestore and bars The Gin Can, Ivy League and Unit 3 Bar. With regular events and pop-up food traders it really does have everything under one (non-existent) roof. 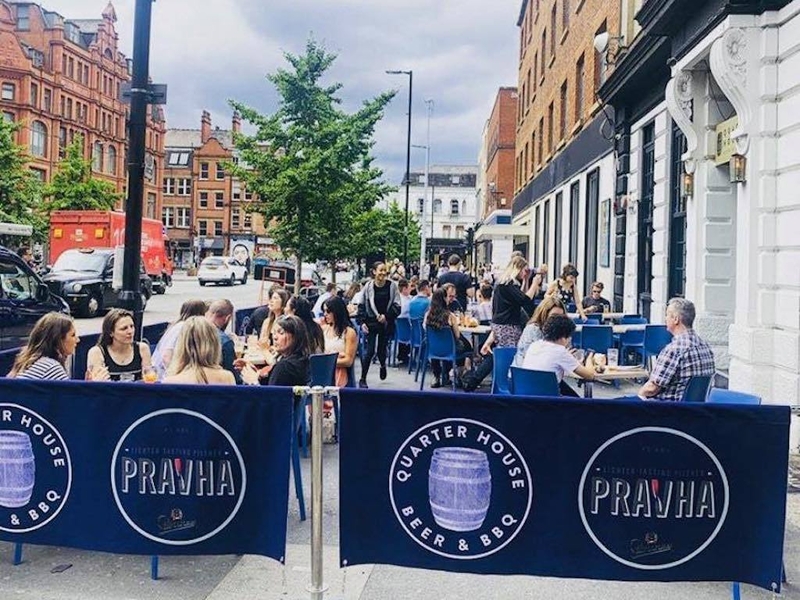 Hidden in plain sight is a term usually reserved for cold war era double agents that have infiltrated MI5 in dodgy James Bond rip-off films, less so for BBQ bars in the centre of Manchester, but that’s exactly what this is. Despite being slap bang in the middle of Stevenson Square there are still plenty of people that haven’t been to Quarter House yet. Not only does it have one of the biggest outside spaces in the Northern Quarter but also one of the best barbecue menus this side of Memphis, Tennessee. Think smoked bacon jam nachos, Cuban marinated pork belly lollipops and oak-smoked beef brisket tostadas. Coupled with a great cocktail menu and American craft beer selection, you’re onto a winner. 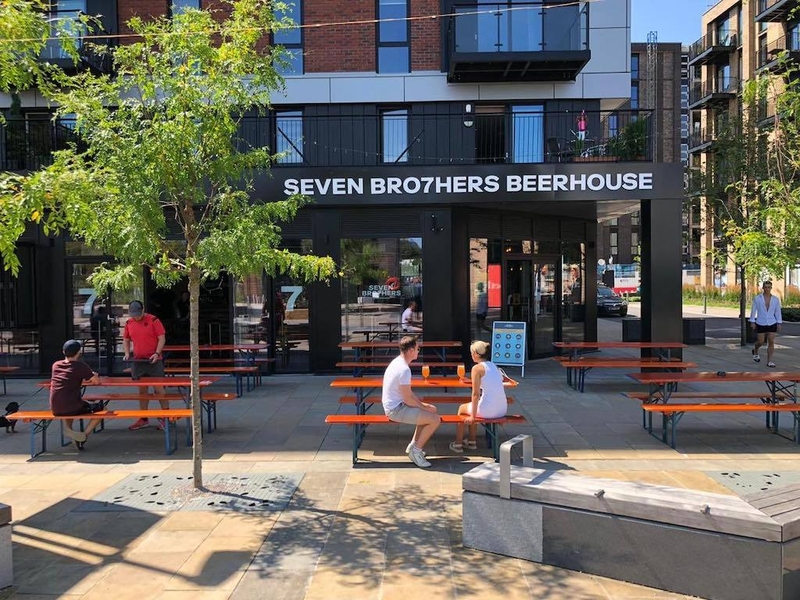 Salford based brewers Seven Bro7hers are slowly taking over the world, one beerhouse at a time. After conquering Ancoats with their hugely popular Cutting Room Square site, they opened their second Manchester beerhouse in the new Middlewood Locks development in Salford at the end of last year. With more beerhouses planned in Liverpool and Leeds as well as a beer collab with Kelloggs, this septet of brothers aren’t messing about. Middlewood Locks is less than ten minutes' walk from Deansgate so not as out-of-town as you might think but still far away from the crowds. Situated next to the defunct Manchester-Bolton-Bury canal, there are views across to the city and a lot of space outside - and inside, for that matter. All their home brewed favourites are available on tap along with guest ales and a rustic food menu. The clue is in the title – or in this case, it isn’t. Chances are, if you’ve been out for a few drinks around the Northern Quarter, you’ve started off or ended up at Terrace. Known for its stripped-down brickwork, hip hop & R&B soundtrack and party atmosphere at weekends, it’s a real Thomas Street institution. But you may have been sitting in the bar and never realised that above your head was a bonafide city centre sun sanctuary. It’s quite a shock walking up the stairs and heading out onto the wooden decked garden for the first time. With plenty of bench seating, no shadows, and enough space to swing a couple of cats it really is a rare find, especially for the Northern Quarter which is so bereft of outside space. You could argue the owners need to shout out more about this space but they have literally named the place Terrace so it’s probably your own fault if you haven't been up there yet. 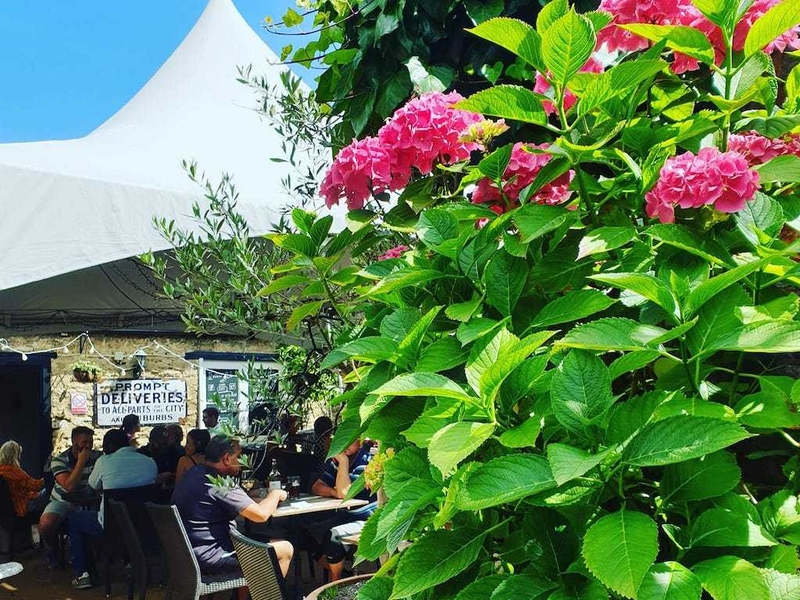 When it comes to Manchester’s leafy suburbs, Didsbury is leafier than most and with that comes beer gardens, lots of them. The likes of The Didsbury, The Metropolitan and The Greenfinch are the go-to places with their vast outside spaces that gobble up outdoor drinkers. But there is another Didsbury favourite – West Didsbury to be exact – that is known to locals and less so to those unfamiliar with the area. Located on Barlow Moor Rd at the top end of the Burton Rd riviera strip and hidden behind some large fir trees lies the Woodstock Arms. The Woodstock – which eagle-eyed Cold Feet fans might recognise from the show - is a popular hangout for local residents that enjoy its laid back atmosphere in comparison to some of the boozier Didsbury establishments. A glut of outside seating, a historic building and a cracking Sunday roast menu make this a great choice if you’re venturing out of the city centre. 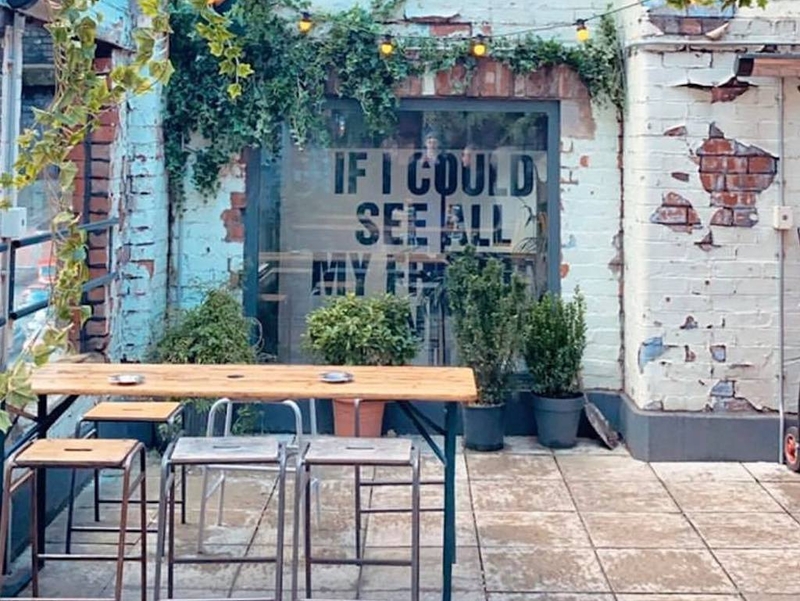 Despite opening to critical acclaim and numerous award nominations including Manchester’s best bar at the Manchester Food and Drink Awards 2019, YES is still not on everyone’s radar and it really should be. Nestled between the Lass O’Gowrie pub and One Plus Chinese restaurant in a former printing press and auctioneers building, YES has quickly established itself as one of the cities hippest music venues. With acts such as Giles Peterson, Mike Skinner and Hot Chip performing since they opened, in-the-know music lovers flock here every weekend along with the cooler students that prefer good sounds to £1 alcopops. Whilst the basement club and their legendary pink room both charge for entrance the ground floor bar and roof terrace are both free. The terrace is a little snug but has both inside and outside seating as well as pints starting from £2.95, winner. Grab a vegan kebab from the brilliantly named Doner Summer on your way up.