FOOT selfies are flooding Instagram feeds, but it’s not the latest Louboutins or a particular sexy pair of Gucci trainers that are driving the craze – it’s the floor tiles. Offering a riot of glossy, richly coloured, intricately designed backgrounds, some restaurants are now being chosen as much for their snappable floors as their snap-uppable menu. Pinterest has reported a 1,276 per cent increase in the search for ‘painted floor tiles’, and declared it a global trend.

Manchester-based tile expert Sam Youssefi co-owns online business Porcelain Superstore with his two brothers. He says: “Tiles are the most practical material ever made and have proven their durability, versatility and beauty over thousands of years. Going back to Roman times, they used ceramics to create magnificent decorative effects, such as mosaics, in their palaces and public areas.

“We carved a niche by initially offering tiles that people weren’t seeing in the shops, such as the racing green coloured crackle tiles that can be found outside old British pubs and now more recently Palm Springs tiles that we literally can’t get enough of. And we have seen a huge increase in online traffic searches for tiles… Instagram and Pinterest have played a huge part in this. Tiles come in all kinds of designs now, from geometric to floral prints and wood effect to concrete effect, which all look great in pictures.”

But you don’t have to venture over to Topkapi Palace (Istanbul, not Deansgate) or Copenhagen’s Llama restaurant for a seriously stylish night (or day) on the tiles. You can stay in Manchester… 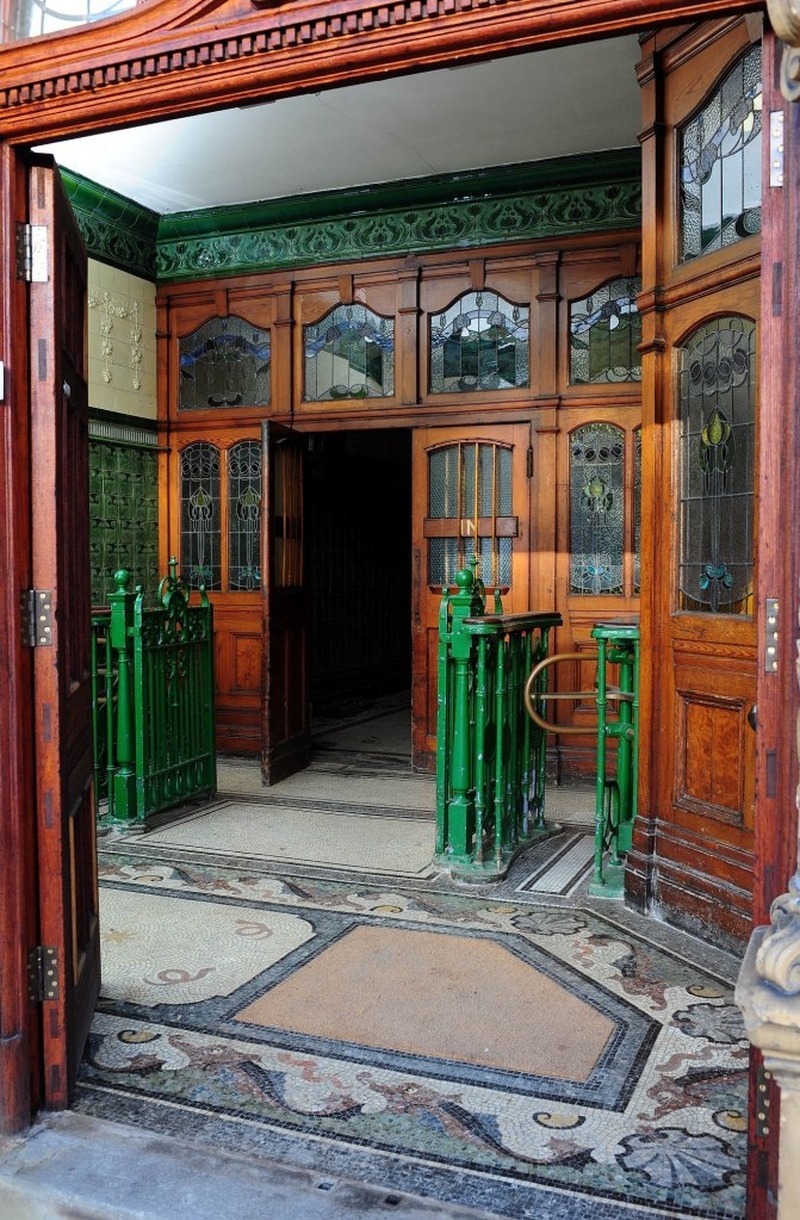 Dubbed Manchester’s Water Palace by the mayor at the time, the ethereal Victoria Baths opened its doors in 1906. Since closing to the public in 1993, the building has been undergoing restoration, enabling it to be used as a heritage visitor attraction, as an events space and even as a film set – with Sherlock, Peaky Blinders and Mrs Biggs all shooting scenes there.

The elegant tile work – on both the floors and walls – in the Baths has become the inspiration for a new tile project aimed at helping return the building to its former glory. Tile Giant has created a special collection with a percentage of each tile sold contributing to Victoria Baths Trust, the charity that looks after the building, with the long-term aim of full restoration.

James Heese, managing director of Tile Giant, says: “When you walk through the doors of the Baths, you are transported to another era of elegance. The Edwardian design and architectural inspiration of this new range will mean that homeowners will feel a sense of stepping into history, while maintaining high-quality design that translates into modern-day living.” 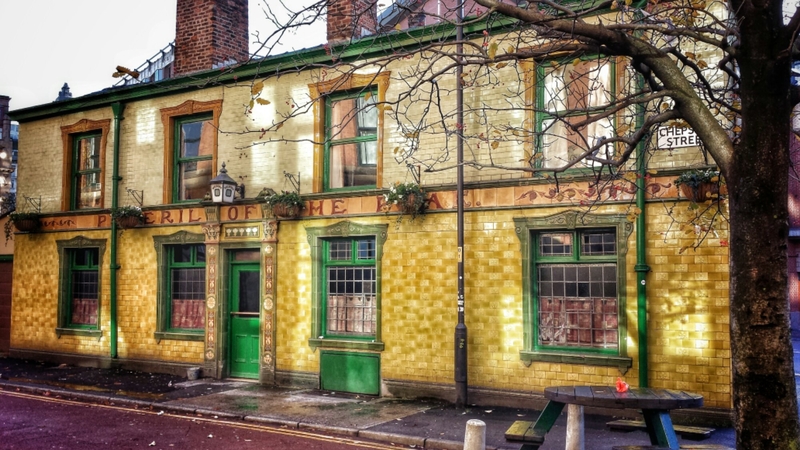 Peveril Of The Peak

The glossy green tile-clad exterior of the Peveril Of The Peak pub is the perfect background for an atmospheric photo. In fact, the deep two-tone tiles are so shiny, you can probably check your reflection in them before the shutter clicks. And your social feed will thank you kindly for the visit.

Sitting completely detached on an island of land between Chepstow and Great Bridgewater Streets, this Victorian curiosity dates back to the early 19th century, but the head-turning glazed cladding was added in 1900. Inside, a dado of green and cream tiles, a stained glass screen over the bar counter and an elaborate Victorian fireplace all add to the appeal.

This charming pub, whose name is said to commemorate a horse-drawn stagecoach that ran between Manchester and London, faced demolition by a planned change in the road layout in the 1980s. A campaign was formed, the road was diverted and the pub (and its beautiful tiles) was thankfully saved. 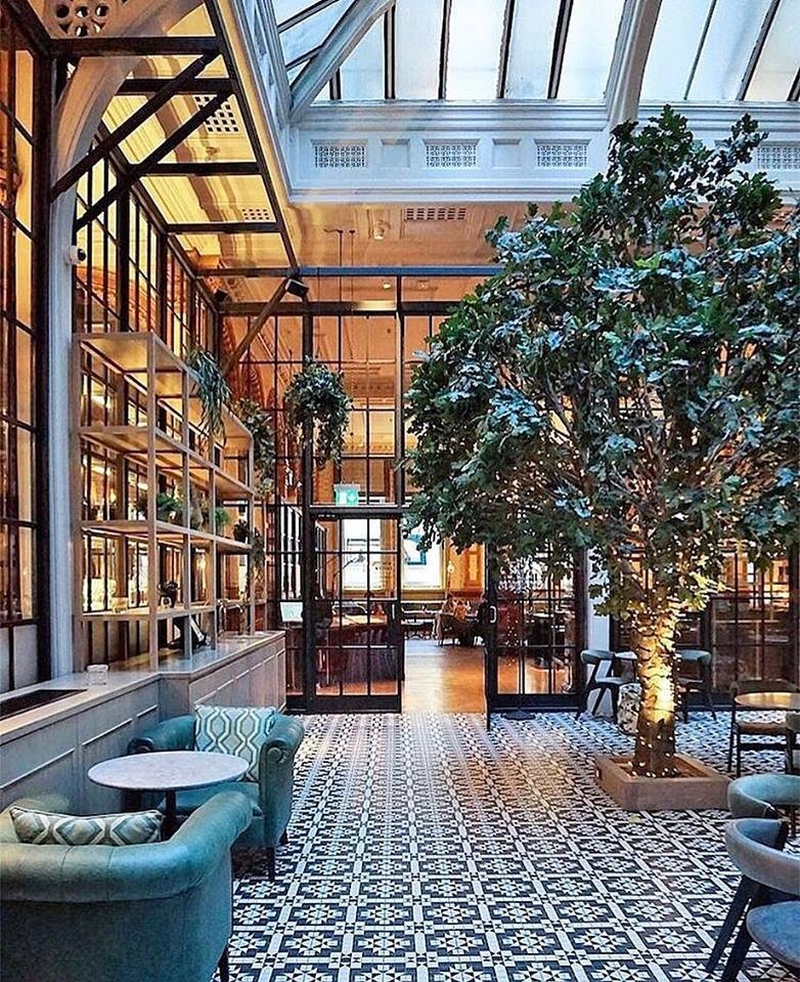 At the front of the bar, floor to ceiling on the restaurant walls, beneath your feet in the fairy light-strewn Winter Garden – the stunning tiles are so abundant and make such a statement in Refuge that they seem more like the very fingerprints of the venue. In the main dining room, a subway-inspired tiled wall is decorated with a mural proclaiming The Glamour Of Manchester. In the atrium, beautiful, bold monochrome tiles lie underfoot.

The Refuge is housed in one of Manchester’s most iconic buildings – the red-brick Principal hotel, latterly the Palace Hotel and originally the offices of the Refuge Assurance Company, which was constructed on Oxford Street in stages between 1891 and 1932. Since benefitting from a sympathetic renovation, many of the original features and details have been restored with sensational effect. 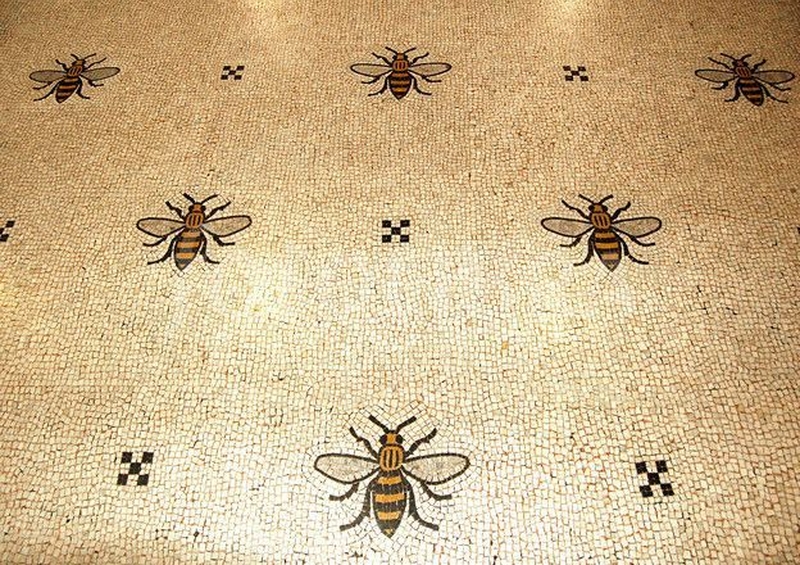 The Victorian, neo-gothic Grade I-listed building on Albert Square is in itself hugely iconic and recognisable, and a fitting homage to the gems that can be found inside.

There surely could not be a more iconic Manchester foot selfie than standing legs akimbo on the bee-embellished tiles of Manchester Town Hall. Set in gleaming white mosaic, the bee images are scattered across the landing leading to the building’s Great Hall. Now a ubiquitous emblem for Manchester, the worker bee symbolises the city’s hard-working industrial history – a hive of activity during the Industrial Revolution, workers were nicknamed ‘busy bees’ – while the mosaic’s cotton flowers symbolise the main source of Manchester’s wealth back then.

Elsewhere, heavily tiled dados, rich terracotta wall tiles and floor tiling of coloured marble with a central wheel pattern are a photographer’s paradise – although you’ll have to wait until 2024 when the building reopens following a major refurb. 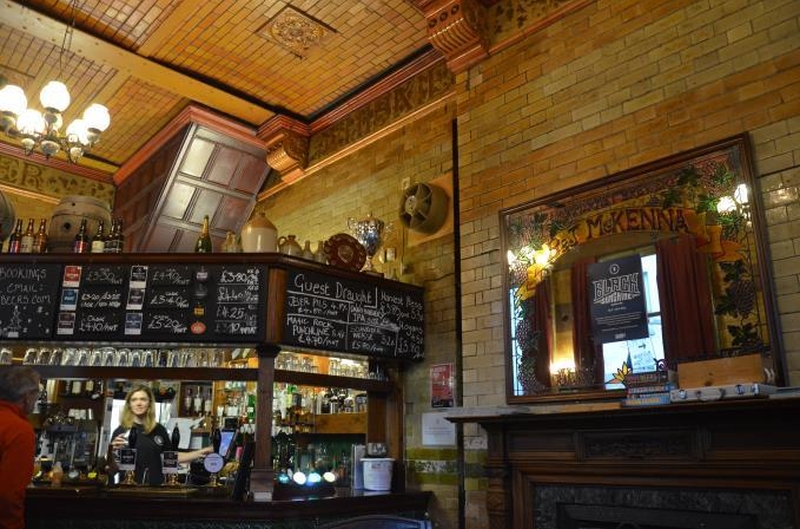 This gothic-style pub, built in 1888 by local architects Darbyshire & Smith, hides a glistening display of ceramic work. Stepping in through the front door from its own corner of pavement standing alone on Rochdale Road is a bit like walking through the wardrobe to Narnia and, for the unsuspecting, its interior is quite a revelation.

Gloriously glazed bricks line the long, narrow walls and above them is a heavily patterned frieze spelling out the names of drinks such as Ale, Porter, Brandies and Cordials. The ceiling features yet more glinting bricks, while the sloping tiled floor is a combination of heavy ceramic and delicate mosaics patterned with roses and leaves.

After a (clearly badly thought-out) refurbishment in 1954, the arches, walls and mosaic flooring remained covered up until being thankfully and very rightfully revealed again in 1989.