WITH a plunging neckline, fitted to the bust and waist, it seems Adidas referred to former FIFA President Sepp Blatter’s 'not-so-helpful tips to get women into football’ guidebook when creating its new women’s replica shirt for Manchester United.

It's a shame, with so much stride made in female participation in the sport, conversation navigates back to what a women should wear to the game

“Let the women play in more feminine clothes like they do in volleyball,” said the departing Blatter infamously in 2004, “They could for example have tighter shorts…"

More than a decade after Blatter's comments prompted criticism of sexism in sport, England's lionesses peaked at 2.4m viewers in their match against Japan during this year's Women’s World Cup tournament – without the help of skin tight booty shorts or jiggling cleavages in low cut tops. 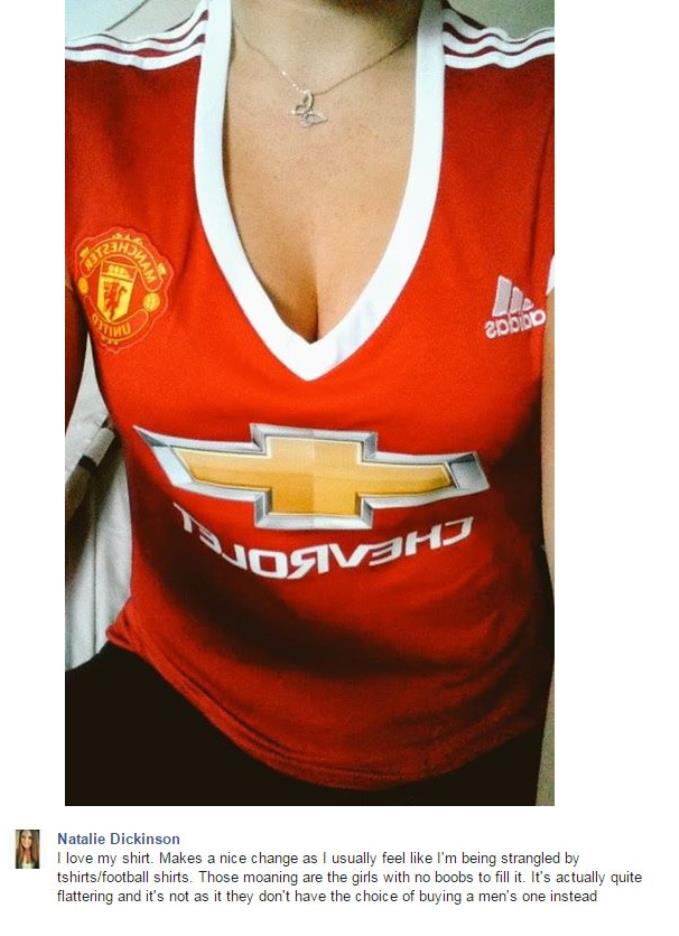 It's a shame, with so much progress made in female participation in the sport, conversation navigates back to what a women should wear to the game - on the pitch and in the stands.

Adidas launched its new shirt following the brand’s new £250m deal with Manchester United after the club's contract ended with Nike. Nike’s women’s shirt was comparatively less exposing, buttoned to the throat and loose fitting, while Adidas’ cleavage exposing re-brand has prompted some to consider it sexist.

@MUnitedGirl @adidas This is a disgrace. Women can't even wear normal looking football shirts these days? FML. Looks nothing like the men's.

Seriously @adidas?! why is the V neck so low compared with mens one? Some of us don't like to show cleavage. @ManUtd pic.twitter.com/km4nOPs0nK

One suppoter of the shirt tweeted: 'the only people moaning are the one's that can't fill it'.

On the face of it, Adidas’ dilemma was to create a female shirt that marginally differentiates from the male version yet flatters the female body type. The shirt, smaller in the shoulders, slightly more fitted in the waist and with a deeper v-neck makes the shirt fractionally more feminine – but that doesn’t necessarily make it sexy or even sexist. It's most likely to depend on the woman wearing it. The alternative is a replica t-shirt that ignores a ‘womanly’ shape entirely – but that would simply make it a men’s shirt. It’s a design catch-22.

It’s unwelcome press (no press is bad press 'n' all that - Ed) for Manchester United who still haven’t provided a definitive answer why, unlike opposition Manchester City, the club does not have an active women’s team. The t-shirt debate arrives in the same month Blatter made more unwelcome comments, stating that football 'is still macho' and that the women's game is still 'limping behind'.

While more and more women attend football matches, there’s been some hurdles for the female fan to leap over before comfortably settling into the stadium; it is (was) after all the man’s domain, the bastion of masculinity, where spitting, swearing, chanting and occasional fisticuffs is par for course. The assumption is (was) that women wouldn’t be interested, or blush and hide behind handkerchiefs as the action gets too thick and chants get too sweary. The assumptions still linger.

After all, football stadiums still feel like one of the last few places where political correctness hasn’t thoroughly seeped through. Asking female supporters to don a figure-hugging t-shirt feels as though we're teetering back over the line. Still, showing some cleavage feels like the least of football's problems when it comes to its female supporters - even if the shirt isn't sexist, the sport certainly can be.

Throwing on a football shirt should always be a simple expression of support for your team, a boost to the team, rather than a boost to your cleavage.