A RESEARCHER at Manchester Metropolitan University (MMU) has been delving into the origins of football in Manchester and exploring how the sport triumphed over other forms of team sports in the city. Despite the city’s passion for football today, Manchester’s most popular team sport in Victorian England was rugby.

Dr Gary James, lecturer in Sport History at MMU, has looked into the transition of the city’s favourite sport for the Soccer & Society Journal in ‘The origins debate – how soccer triumphed over other forms of team sports in Manchester’ (the findings are free to download for a limited period here).

Gary said: “There is no doubt that Manchester was recognised as a rugby playing city during the 1870s to 1890s. Although an early football community had existed in Manchester during the 1860s called Hulme Athenaeum, there were few opponents west of the Pennines making it difficult for the community to grow. The majority of local clubs also preferred a rugby version of the sport.”

Lacrosse and pedestrianism (a professional form of athletics), were also prevalent and popular sporting activities in Victorian Manchester. These sports were all more popular than association football with some pedestrian events in east Manchester attracting 10,000 or more in the years before football became significant locally.

In the 1870s the contemporary form of football was growing with several prominent clubs appearing in Manchester and also Glasgow, Nottingham and Stoke. The establishment of the Manchester Football Association (MFA) in 1884 also helped the sport to grow

Gary offers the explanation that “Although the sport was growing, it couldn't displace rugby and the introduction of Lacrosse in the mid-1870s saw that sport grow rapidly, limiting football’s opportunities to dominate the sporting scene.

“Despite this, it was not until the split in rugby in 1895 into two sports - a professional version, now rugby league, and an amateur version, now rugby union – that football could shine. Rugby’s demise was a self-inflicted wound that divided Manchester's large rugby community into two.”

By the end of the nineteenth century, Manchester’s football clubs were seeing their first successes and football could be said to have become the leading Mancunian team sport.

READ: How Hulme Gave Birth To Football In The Region

Gary added: “Other influences did factor in to football’s success in Manchester. After the rugby split, rugby league teams tended to represent districts or towns rather than the city. Manchester’s football clubs not only saw an advantage in taking the city’s name, as Manchester City (main image) did in 1894 and Manchester United in 1902, but also managed to encourage wider interest in the sport through their ability to compete on a national stage.

“For any professional sport to prosper it needs motivation, interest, entrepreneurs, and a willing public and financial security. The pro-active football community, with two clubs keen to represent the whole of Manchester, supported by entrepreneurs who could see how to make their business a success, took their chance."

"Once Manchester achieved its first national major footballing success in 1904 (Manchester City and the FA Cup), the opportunity for rugby of either code to displace football as Manchester’s leading team sport was lost.”

‘The origins debate – how soccer triumphed over other forms of team sports in Manchester’. Gary James. Soccer & Society. 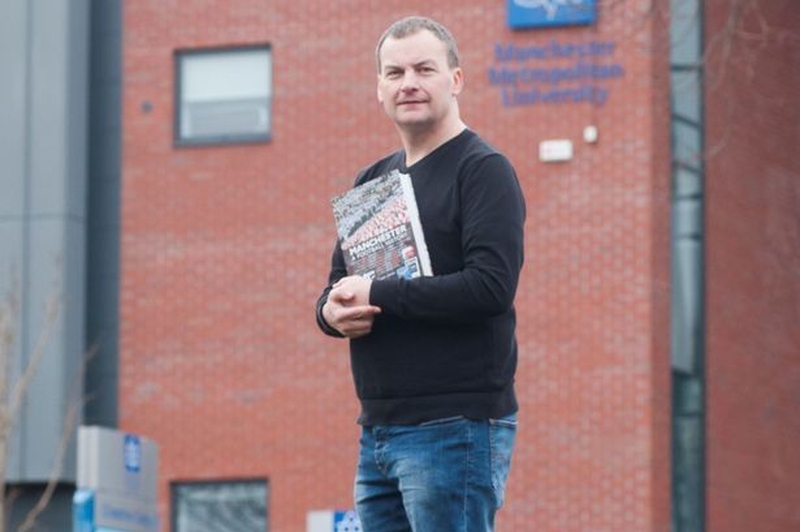 Dr Gary James is a sports historian and lecturer at Manchester Metropolitan University and has published exntensively on Manchester football since the eighties (Manchester: A Football History is available to buy here)