There's so much going on at the moment, it really feels like the world is reawakening. This week has seen two big event line up announcements for Manchester International Festival and Pride 2021 and our hospitality world continues to throw us plenty of exciting tidbits of news to get our teeth into while we look forward to the reopening of indoor dining in May.

Read on for an MFDF special, a hangover cure delivered to your door and a boozy pop up handing our free ice cream with a kick. 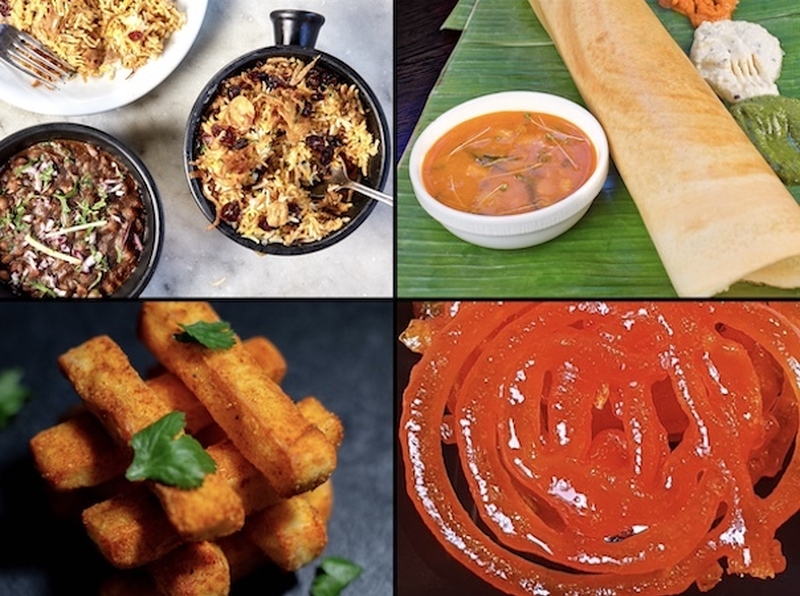 Manchester dahl-ings cook up a feast for MFDF

Meat eater or no, the Indian subcontinent has arguably the best veggie food on the planet and Confidentials Editor is prepared to fight you (in a very firm, loud, verbal manner) if you disagree - an argi-bhaji, if you will. So it's with great excitement that we bring you news of Manchester Food and Drink Festival's Meat Free Curry Feast. The event is the first to be announced as part of MFDF's "Hub Takeover" series at Cathedral Gardens and features the coconut cream of Greater Manchester's Indian restaurants including Bundobust, Sanskruti, Auntie Ji's, Dishoom and our pals at the OG Lily's. MFDF's curry club takes place on 21 September and tickets for the three-course vegetarian Indian feast are on sale now for £40 a head. 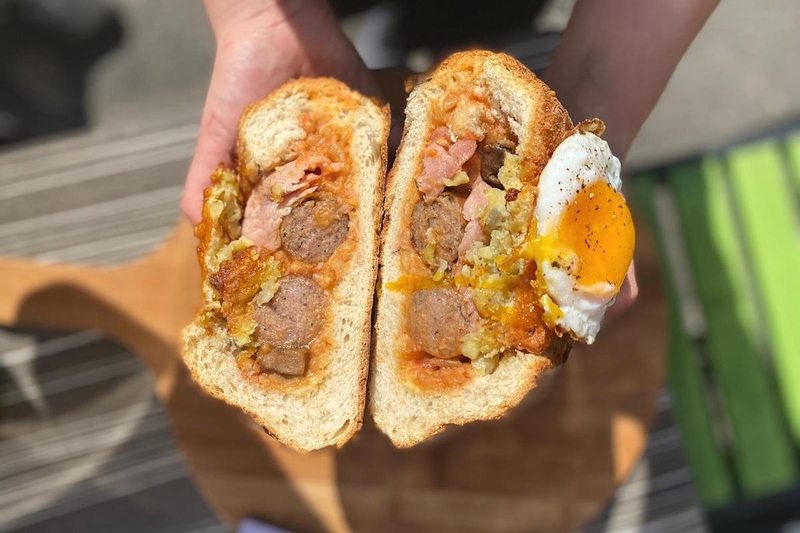 On the bread line

As outdoor boozing returns with a vengeance, so have the number of texts from friends asking us where to get the best hangover-killing breakfasts. The lazy gets need not even roll out from their fetid pits of shame as they can now call or text Bread & Bowl to get a hangover cure delivered to their door within an hour - for £15.

The "Hangover Line" consists of a full English breakfast served inside a sourdough bread bowl with two drinks of your choice (smoothies, energy drinks, isotonic drinks or fizzy pop). B&B also promise a "secret package" to get you through the rest of the day. All absolutely legal, of course. 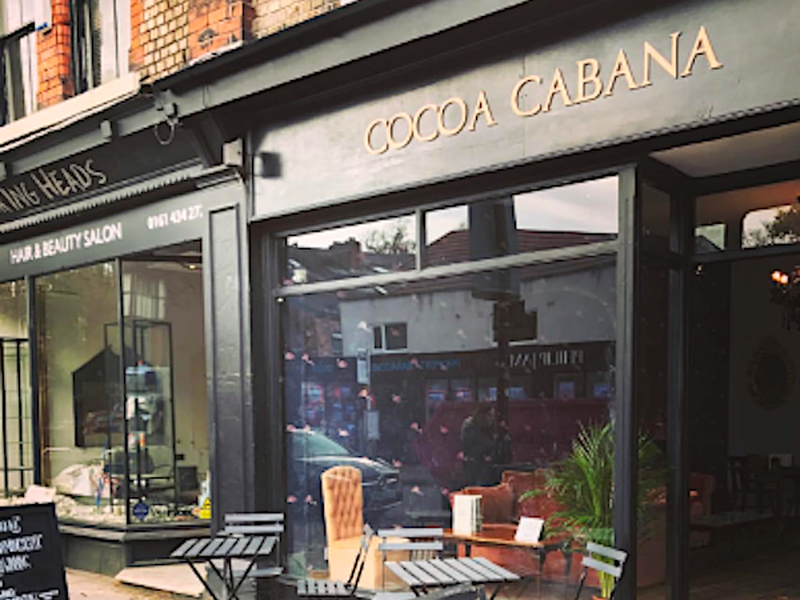 Cadbury loves Cocoa (and is giving away free chocolate)

In other philanthropic advertising news that some might call a Wonka-style golden ticket gesture, Cadbury has arranged for half a million pounds of TV, outdoor and YouTube ads normally reserved for themselves to feature the branding of six independent chocolate makers across the UK - including Manchester’s own Cocoa Cabana. It's all part of their For the Love of Chocolate campaign.

Cocoa Cabana’s choccy confections are a highlight of any trip to Didsbury or Ancoats. But if you’re not lucky enough to be able to visit, you can always go to Cadbury's website from 4 May to claim one of 2000 free independent chocolate bars courtesy of the purple-clad chocolate champs. “It’s a small way to shine a light on our fellow chocolatiers,” said Cadbury before drifting away on a river of molten chocolate. 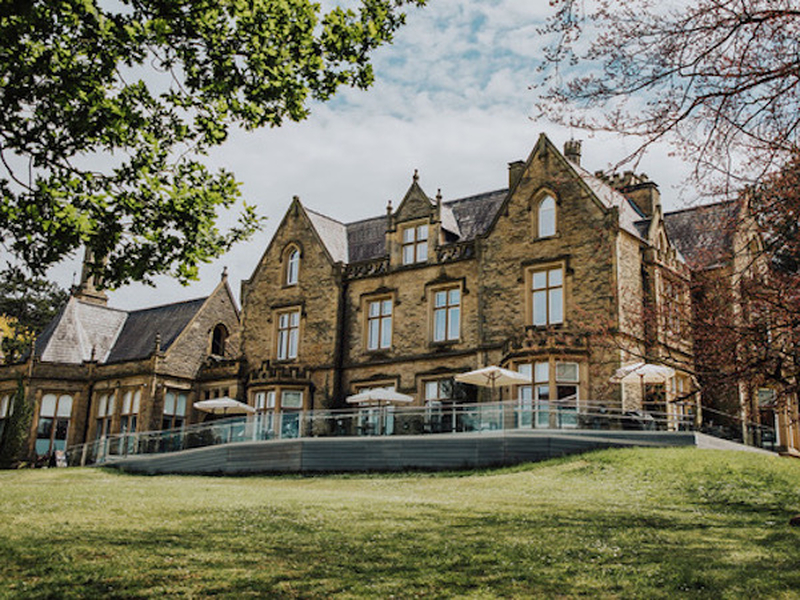 New fellow on the park

Cheadle boutique hotel Oddfellows On The Park has announced local lad Oliver Walker as its new head chef. Born and raised in Salford and trained at the Gleneagles Hotel, until recently Walker could be found in the kitchen at the Pikes Hotel in Ibiza or zipping up and down the country’s events and music festivals in his acclaimed street food van The Nomad.

Nomad no more, he’ll be bringing a new "casual" menu showcasing local and regional ingredients to The Galloping Major restaurant. One of the many dining parlours, bars and terraces that reside on the sweeping 100-acre Victorian estate.

Amongst other Modern British fare, Walker promises "an afternoon tea worthy of its setting" and an "elevated" burger. We can only hope it hovers over to your table and deposits itself neatly into your amused bouche. 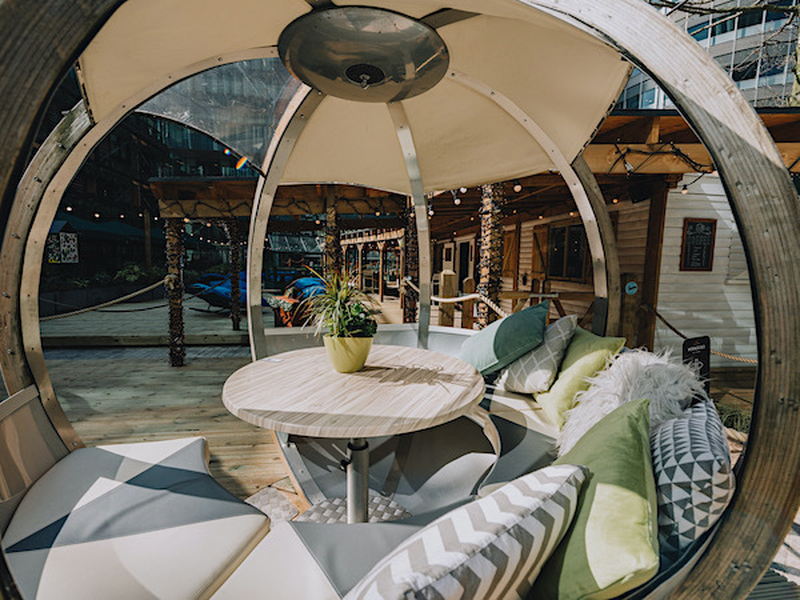 Spinningfields' Lawn Club is back

If you didn't get a go in those space-age looking globes over in Spinningfields during last year's sliver of freedom, they're finally available to book again - along with other desirable dining areas - from 17 May. Hardman Square's The Lawn Club has undergone extensive renovations and now has a fully enclosed and Manchester weather-proof interior area and outdoor terrace, with its Lawn Houses, Lawn Pods and deckchairs returning. This place is all about the drinks and the usual suspects (cocktails, craft beer etc) are all there alongside a new menu of "burgers, bagels and bowls". Avocado features heavily paired with a lemony chicken breast burger and a "Brunch Bagel" amongst other crowd-pleasing dishes.

The Lawn Pods and Lawn Houses accommodate up to 6 guests and can be booked in advance. These guys are serious about no shows, so while there's no extra charge to book these fun spaces, a card authorisation for £30 will be required, only to be charged in the event of a no show. There's space for a handful of walk-ins too if you'd rather not commit. 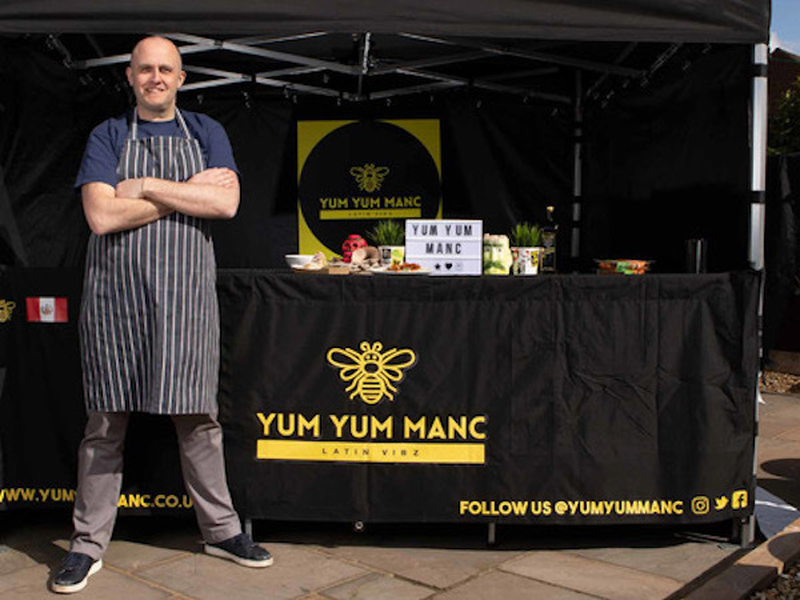 Local street vendor Daniel Richardson of Latin-style set up Yum Yum Manc is calling on the power of Manchester to help him win the ‘Battle of the ‘Babs’.

Competing against other traders from South London, Brighton and Cambridgeshire, Richardson’s Chick’n Chimichanga entry - which features Quorn Peri-Peri Strips - could secure him some free advertising space in Manchester City Centre generously sponsored by Quorn UK. The act of benevolence is part of the meat-free brand's efforts to help support street food chefs across the country whose businesses have been affected by  *gestures wildly at everything*. 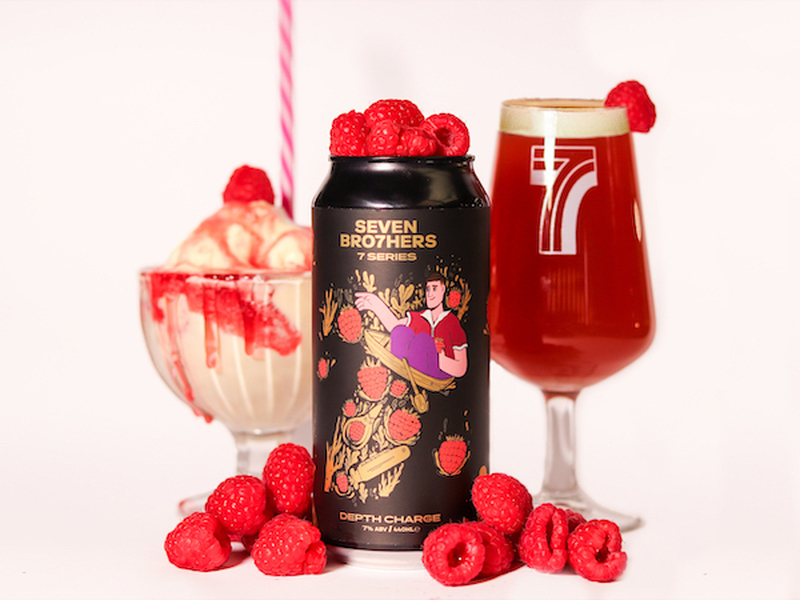 We previously reported on the "birthday beers" selection from Salford-based brewery Seven Brothers. Each beer in the series exemplifies the quirky taste of each brother and nostalgic memories of childhood snacks, in a move that recalls both classic fairytales and the 5pm stock-up before Neighbours starts. So put the Peanut Butter on a Jaffa Cake stout in a headlock, give it a wedgie and instead welcome Depth Charge, a "hoppy, bold RIPA charged with raspberry and lactose, leading to a raspberry ripple explosion."

Project manager and official Brother, Nathan McAvoy, said: "I chose to make a red IPA because I love rich coloured and flavoured beers. Depth Charge has an initial sweet taste from the raspberry and vanilla flavours followed by a hoppy bitterness which is balanced by soft malty notes."

Seven Bro7hers have even more to celebrate as two of their signature beers will be sold in ASDA supermarkets nationwide. You've probably supped plenty of these already but in case of any doubt, their Juicy IPA is a hazy, hoppy beer with citrus aromas while the Honeycomb Pale Ale, aka "a crunchie in a can", is an amber pale ale that uses hops to create a unique honey flavour. Both beers are vegan. 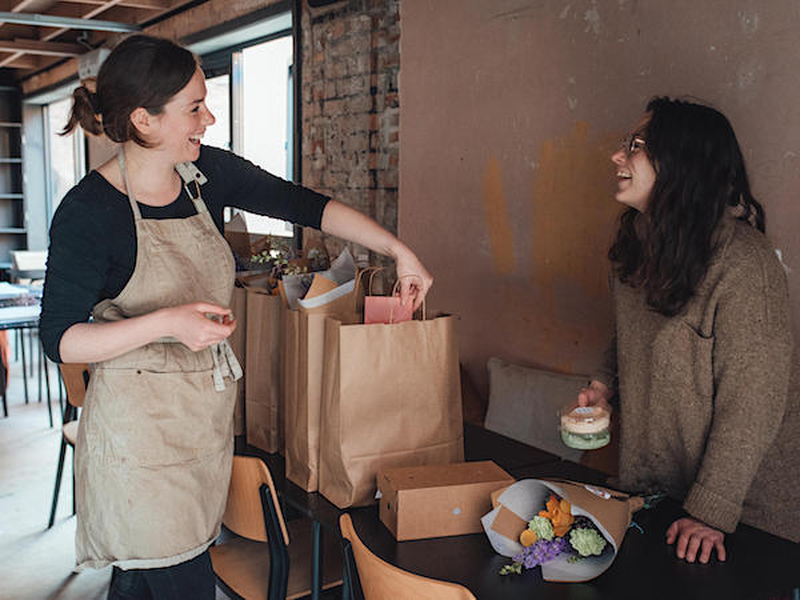 Bread Flower is the latest pop-up to be added to proceedings over at canalside bungalow on stilts, Kampus. Maya Black and Scarlett Jamieson's lockdown-born delivery service does exactly what it says on the (bread) tin: delivers bundles of six sourdough bagels coupled with hand-tied bunches of seasonal flowers all over Manchester every Sunday morning. The bagels come with sides like Blossom Coffee Roasters beans and Manchester Smokehouse salmon as well as flavoured schmears of your choice (think light cream cheese rippled with dill and spring onion, beetroot or chilli) and will now also be available for collection from Kampus 10-12pm from Sunday 2 May. Selling out within just 40 minutes when they launched last month, the duo have been struggling to meet demand from their current kitchen in Altrincham. Prices start at £30. 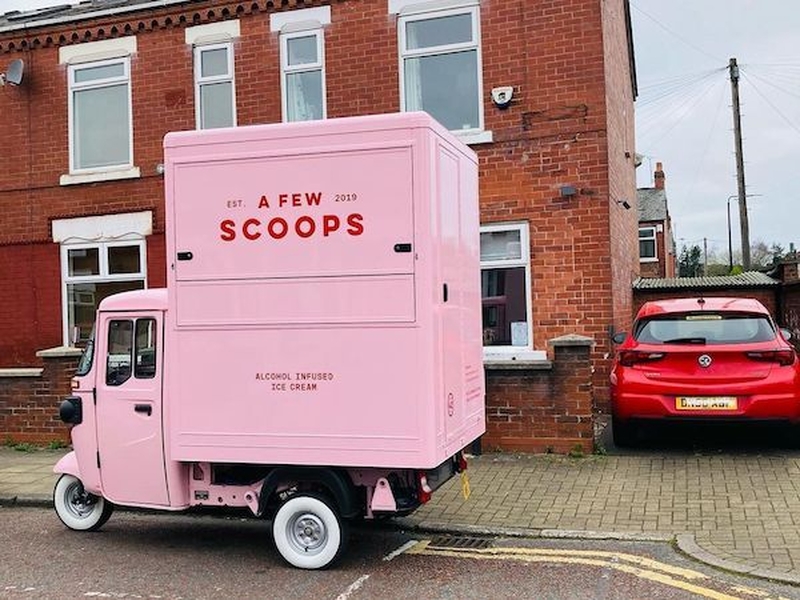 Jolene will park up outside General Store MediaCity on Saturday 1 May (that's tomorrow, folks!) from 12-6pm. Cocktail-inspired ice cream flavours include Espresso Martini, Old Fashioned and Pina Colada (vegan). There will also be Peach Bellini and Mojito sorbets (both vegan) and non-alcoholic options include coke float ice cream and cherryade sorbet. I'm begging of you, Jolene, please don't take my cone.