BRITISH Vogue’s editor in chief, Alexandra Shulman, wears a genial smile as she addresses the crowd at the reveal of the Vogue 100: A Century Of Style exhibition at Manchester Art Gallery. It’s "incredibly gratifying," she says, "to be in Manchester to unveil what has been a six year project in the making." Gratifying, indeed. This year marks the hundredth year of the world’s most revered fashion magazine, and on that milestone also celebrates its biggest ever selling issue featuring The Duchess of Cambridge. This highly-regarded exhibition, which opens up Vogue’s vast fashion photography archives beginning in its founding year in 1916, continues the celebration of what has undoubtedly been a century of trailblazing style.

The tour continues backwards, voyaging through to the supermodel's heyday during the 1990s where most visitors tend to linger

Direct from the National Portrait Gallery in London, Manchester Art Gallery is the only city outside London to host this exhibit. And it’s a gift.

As exhibit curator, Robin Muir, explains during a preview tour, this was not just about black-framed pictures hung on the gallery wall in rows. It is instead 280 modern and vintage prints from the Condé Nast archive, with international collections found in Costa Rica, Singapore, the National Portrait of Gallery Washington and more, brought together to tell the story of the fashion magazine.

To tell the story of Vogue (and what it meant to be ‘in vogue’ at the time), the exhibition journeys backwards from the present to the past. Segmented into decades, each era is a portrayal of the mood, consciousness, and of course the fashions of the time. Here, we find not only changing tastes in beauty and style, but also society's transforming attitudes, desires and motivations.

Take the series of exceptional Second World War photographs by Vogue’s official war correspondent and former model, Lee Miller, which are inarguably one of the exhibit's must-see highlights. These rare and poignant images signposted Vogue as an important and culturally vital publication, whilst the rare image of Horst’s famous 'corset' photograph from 1939, which inspired the video for Madonna’s hit song Vogue, will go down in pop culture history for eternity. 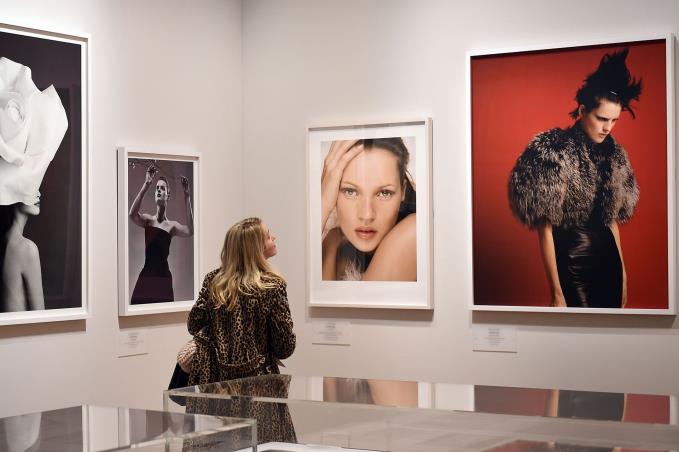 The exhibit begins in today, marking the future of fashion publications with a sleek, cool fashion film. In a time when the internet continues to pose a threat to the hard-copy magazine, the fashion film feels like a necessary compromise. The tour continues backwards, voyaging through to the supermodel's heyday during the 1990s where most visitors tend to linger, be it for the early (and controversial) shots of Kate Moss during the height of grunge movement, to Peter Lindbergh’s iconic 1990 cover shot of supermodels Naomi Campbell, Linda Evangelista, Cindy Crawford, Christy Turlington and Tatjana Patitz.

Away from the lure of the supermodels the exhibit also revisits cult images of many of the faces that have shaped the cultural landscape throughout the last ten decades, from Henri Matisse to Francis Bacon, Lucian Freud and Damien Hirst, Marlene Dietrich to Gwyneth Paltrow, Lady Diana Cooper to Lady Diana Spencer, and Fred Astaire to David Beckham. Also featured in the exhibition are the fashion designers that defined the look of the century, including Christian Dior, Yves Saint Laurent and Alexander McQueen.

Just as peeling back the front cover of a Vogue magazine, in all its glossy luxury, has always been a ceremonial act for lovers of the publication, the exhibition reveals pages upon pages of fantasy, beauty and style – mostly unachievable for the common masses, but always aspirational, dreamy and allowing that brief escape into something remarkably glamorous.