- So far 22 people have been confirmed dead and 59 more injured following a suspected terror attack at Manchester Arena - police say children are amongst the dead.

- 23-year-old man arrested in Chorlton/Whalley Range area in connection with the bombing.

- Heavily armed police have entered a property in Fallowfield.

- Attack on arena was carried out by a sole male suicide bomber who may have used a nail bomb after nuts and bolts were seen scattered around blast area.

- According to Reuters, ISIS has claimed responsibility for the attack.

- The incident took place at approximately 10.33pm as a sold out concert by American popstar Ariana Grande drew to a close.

- The attack is the deadliest act of terrorism in the UK since the 7/7 London bombings in 2005, where 52 people died. 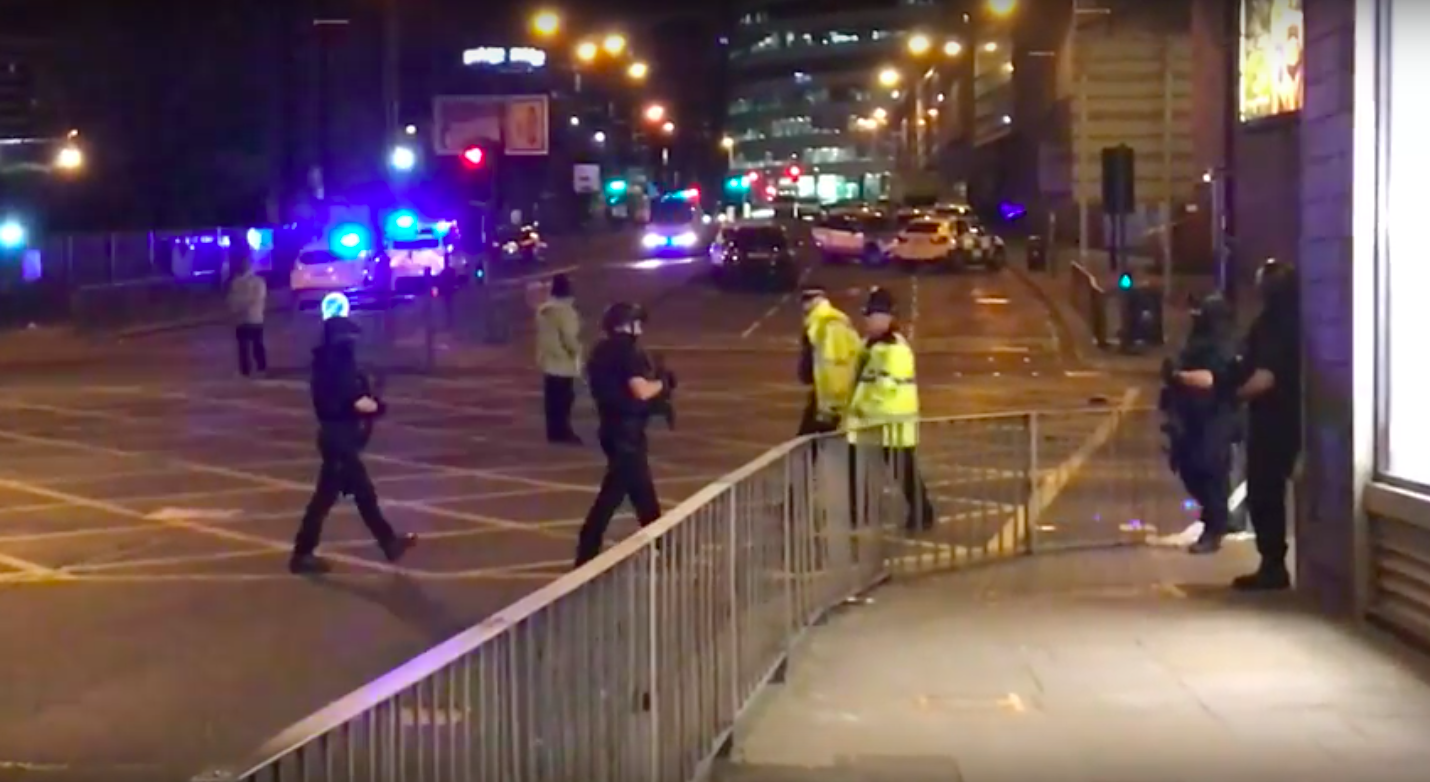 Armed police swooped on the arena following the attack

- British Transport Police reported that the explosion took place in the foyer of the arena as people left the concert. Manchester Arena have confirmed the explosion happened in a public space outside the venue.

- More than 400 police officers and 60 ambulances were deployed during the night.

- Police have confirmed that a controlled explosion took place close to the arena in Cathedral Gardens, however, the package was found to contain clothes.

- Greater Manchester Mayor Andy Burnham told press: "the spirit of Manchester will prevail and hold us together."

Moment of the explosion and start of the chaos in the #Manchester Arena, UK. pic.twitter.com/gxLi5rBQbN
— LEON REPORT (@LeonReport) May 23, 2017

Flash seen from dashcam of nearby parked vehicle...

Chaos as thousands flee the venue...

The chaos outside #manchesterarena when we were all trying to get out😫I hope everyone is okay ❤️ #Manchester pic.twitter.com/ISgx3AzJTF
— jordan mcbrearty (@JSMcbrearty) May 22, 2017

huge explosives heard within manchester arena. some people being treated from injuries. we are ok, just hope everyone else is @BBCBreaking pic.twitter.com/sPYn9t8yu6
— zac haniff (@z_hnff) May 22, 2017

Emergency services rush to the scene...

More than 50 emergency service vehicles around the perimeter of the Manchester Arena @BBCRadioManc pic.twitter.com/NiHs00v4lu
— Pav B (@pavbeee) May 22, 2017

Ambulances out in force heading to Manchester Arena after all lining up on Thompson street fire station. pic.twitter.com/vpAFFUG0MI
— Sam Ward (@SamWardMCR) May 22, 2017

Up to 400 officers attend the scene while 60 ambulances carry casualties to eight hospitals across Manchester...

Buses arrive at the arena to carry concert-goers home. Taxi drivers were also said to be offering free lifts to the stranded...

As dawn breaks, the helicopter continues to circle the arena

Mayor of Manchester Andy Burnham on #ManchesterArena attacks. "We are grieving today, but we are strong." pic.twitter.com/RGVHo6XHLM
— BBC North West (@BBCNWT) May 23, 2017

More from that statement...

#manchesterarena Guy just been arrested and a parcel was found in arndale food court. pic.twitter.com/DuGLaoEbGG
— Alice Williams (@MotherLeopard92) May 23, 2017

Police have confirmed Salman Abedi, 22, as the suspect. However, Chief Constable Ian Hopkins says because they have not yet formally identified Abedi, they can comment no further.

UK Police: "I can confirm that the man suspected of carrying out last night's atrocity is 22-year-old Salman Abedi" pic.twitter.com/ycxNIOSbo3
— The Rouser (@RouserNews) May 23, 2017

Poet Tony 'Longfella' Walsh with a rousing ode to Manchester grit and spirit at the vigil for bombing victims. It's been a moving day for everyone here. What a beautiful evening... what horrific circumstances... what a city.