He was referring to the restaurant name in the new Hotel Indigo close to Victoria Station. This is called Mamucium and refers to the root of the Mancunian matter. Mamucium is believed to be the original Roman name for Manchester and thus 1,939 years old. There is no record of any settlement before that, so that’s as old as we get.

There is nothing more British and beautiful than a good suet

Now, if you write food reviews, then part of the whole self-indulgent delight of the deal is you have to be a pedantic bore/intellectual snob/stuck right up your own jacksie so far it would take a full archaeological excavation at least 1,939 years to extract you. This goes as much for reviewers of burgers and ‘street food’ as much as it does for fine dining bods: don’t believe them if they say anything else.

“It’s always a hard ‘C’ in classical Latin,” I said, twirling a hypothetical cavalier moustache while patting myself on the back, “so it would be pronounced Ma-moo-key-um.” I sat back with the smug grin of Jacob Rees-Mogg.

The food is bloody marvellous irrespective of nomenclature. Chef Andrew Green has developed one of the best reading and best delivering menus in the region. This place needs to speed straight into the top quarter of the Confidential Top 100 best restaurants.

Everything my dining partner and I enjoyed over an expansive Tuesday lunch was excellent, aside from one tiny biscuit thing on a dessert and one caveat over a paucity of gravy. These were such trifling concerns they are rather like complaining about a single tarnished bauble round the back of a ten-foot Christmas tree. 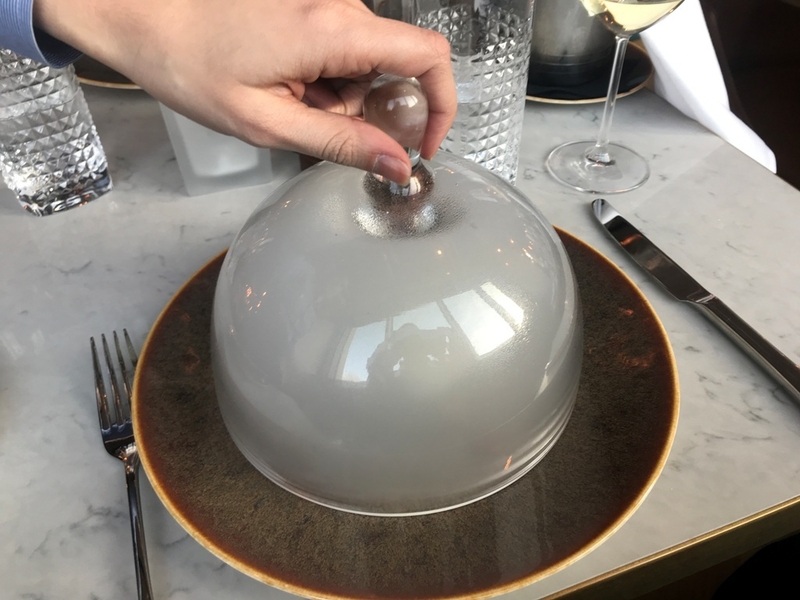 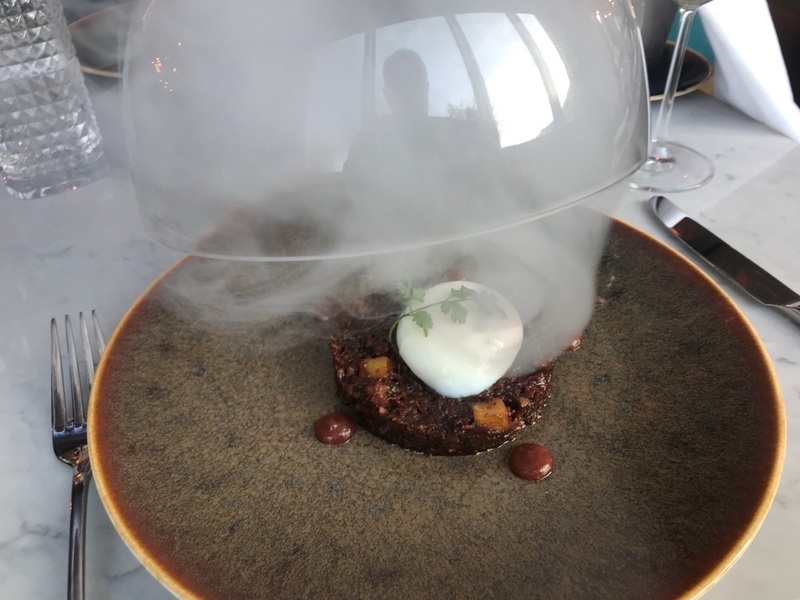 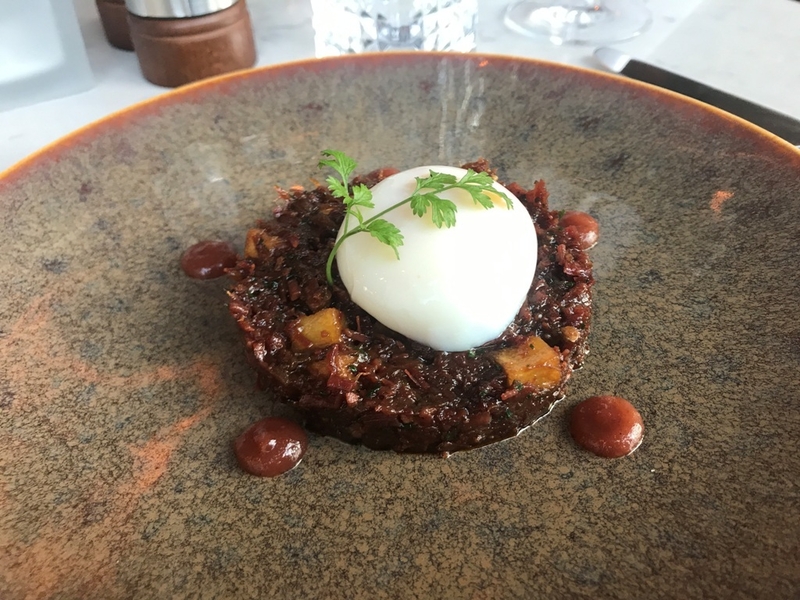 The smoked Cheshire beef hash (£8.50 - pictured above) for my starter was one of the best dishes I’ve eaten in yonks. It came with ceremony too, the waitress lifting the lid, steam billowing, to reveal a delightful-looking hash of beef, caramelised onion, spud, spicy ketchup, topped with a fetching lightly boiled egg. I mixed it all up, getting a lush yolk to run through. Gorgeous it was, and seasoned just so. I am getting bored of under-seasoned food.

The Lancashire hotpot (£22.50) was deconstructed which, could be thought cheeky, but not here.  The cannon of pink lamb was juicy in the extreme, the lamb gravy was gloriously rich, but the main wonder was the slow-cooked lamb wrapped in a cabbage leaf. I would like to take several of these with me to a United match if I could keep them warm. I would poshly munch upon them, as one should a prawn sandwich.

My dessert of blueberry pavlova (£7.50) was as colourful as Pride weekend and came with Chantilly and blueberries - of course. It was given a blast of hyper-localisation with Vimto, which explained the colour. Again it was a winner.

My dining companion, enjoyed a thoroughly entertaining starter of scallops with sweetcorn, beetroot, crumbs of chorizo and perky Romanesco broccoli (£10.50) which always makes me think I’m diving for coral in a steamy Pacific lagoon.

His main of salt-aged Cheshire beef (£29) meant stunning meat really set off by the central tower of suet. There is nothing more British and beautiful than a good suet. This is a rotunda of suet as well, and as the restaurant nestles on the ground floor of the rotunda tower of the hotel, is apt. It’s with this dish that the gravy boat needs to be twice the size, although there was no problem asking for and receiving a double measure. My friend’s dessert was bread and butter pudding (£7.50), artfully presented and constructed, which had satisfying heft, but came with that awkward and taste-free biscuit thing.

The room is fine in a sharp modern hotel manner, but might have been softer. One of the best daylight features are the large windows over Todd Street which give lively views of 600 years of Manchester architecture and provides fun-people watching as people move in and out of Victoria. It’ll be fun identifying which acts are playing at the nearby Arena from the crowds alone as they push past on gig-nights. The service was very good throughout, clearly well-trained.

Hotel Indigo is made up of two elements designed by 3D Reid, the new rotunda tower and the nineteenth century City Buildings. The junction of the two, wherein lies the reception, is cunningly conceived, with an elegance of brickwork. The M Cafe, in the older building, needs a separate review, with its local coffee roasters, jolly selection of cakes and pleasant spaces. What is very clear is that James McDevitt and his team have tried and succeeded in tying this boutique-type hotel to the city. They have tried hard with giving the place a sense of identity and it has paid off handsomely.

Meanwhile with the food, Green has given us a menu that is precise and craftily uncluttered. He has designed a big boned, rockingly robust menu, yet filled with nuance and subtlety that shouts the best of British. Loved it. His attention to detail is also admirable. I can’t wait to tuck into the Cumbrian pressed pork, the full Dover sole and much else. The price points are brave at this end of town, but the food is worth it.

Oh, and by the way, did I mention, it's correctly pronounced Ma-moo-key-um. 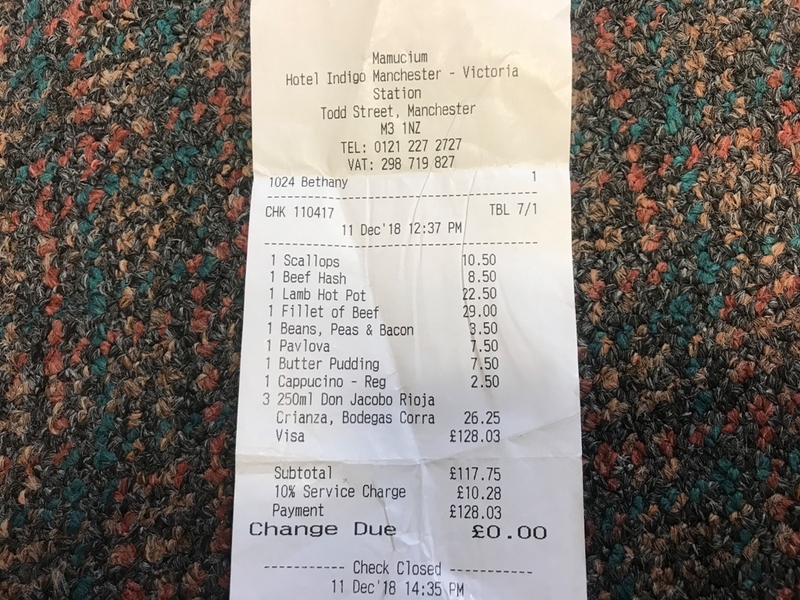