It’s the best part of the week. I’m five or six years old and the waiter is flirting with my mum. She’s too young to be my mum apparently. The owner comes out and shakes hands with my dad, then cups my face in his hands and pinches my cheeks. There’s a huge garlic bread “for the table” and an even bigger pepper grinder. Then I get to pick my own ice cream.

Salvi’s is one of the good ones. A family-run Neapolitan with a menu full of love and carbs. Of course, I’ve been here before. If you follow @mcrconfidential on Instagram you might have seen me battling through a Caprese salad in a hailstorm back in May.

This time it was a Tuesday evening in June and I was meeting a friend after work. Actually, her daughter is my godchild - this is a family affair after all.

She wanted bruschetta to start, but I harangued her into a Salvi’s sharing platter (£16) with a side of fritto misto (£9.50). If I’m to sweat it out in the city for another few months, some crispy seafood with a spritz of lemon is the least I deserve.

Perhaps due to us picking the table furthest from the kitchen, or because the sun was starting to sidle behind the Arndale, the batter was missing a bit of crunch - but the calamari inside was well cooked, tender and sweet. The king prawns were more pleasingly crisp and blushed coyly beneath their deep-fried jackets.

The sharing platter was a generous serving for one, with a ball of mozzarella di bufala as well as a small burrata that delighted with its surprise stracciatella. You can’t turn a corner without bumping into another burrata at the moment, but who’s complaining when you can spread its creamy innards on a slice of toasted bread and generously drizzle truffle-spiked olive oil on top?

Pistachio mortadella, parma ham and grilled vegetables played a supporting role, but the addition of a couple of artichoke hearts would have taken it to another level for me.

Everything you see I owe to spaghetti, and my Sophia Loren fantasy came true that day with pasta vongole (£13.95). Clam season is upon us, and what a delight the little fat bonbons were nestled within the chewy pasta and sauce sweet with tomato and garlic. The pure and simple cooking made me forget that I was full from eating basically a whole packet of rosemary breadsticks as a starter. I happily sipped and slurped up the spaghetti and tossed the empty shells into their waiting bowl.

As we dined early, we had the run of the coop so picked an outdoor spot overlooking High Street and Nicholas Croft, a bustling little corner of the Northern Quarter with all the comings and goings of a busy street in Naples. The staff were perhaps a smidge too attentive, sloping over to check on us every five minutes or so. I know there’s been a spate of the ol’ “dine and dash” recently so it’s possible they’re being extra-cautious, but I did feel a twinge of suspicion as the meal went on. Innocent until proven guilty, right?

While my vongole twinkled like little stars in a spaghetti sky, Pasta Nonna Teresa (£13.95) - named after chef Maurizio’s mother - was a slightly different nut to crack. The rich and creamy pistachio pesto and pancetta dragged us back down to earth. The classic dish fulfilled all its pastel-green promises, but perhaps all the cheese was a little too much after our Olympic dive into a whole burrata moments before. No matter though, it was boxed up neatly to enjoy later on. Just as if we were dining in Nonna Teresa’s kitchen. I could feel my happy little cheeks being pinched all the way from Napoli.

Maybe it was my comeuppance for strong-arming my friend into sharing a starter, but I had to let go of my craving for a glorious tiramisu and compromise by sharing (don’t) a white chocolate mousse with strawberries (£5.50) which we eventually agreed would be a light and bubbly end to the meal.

I was taken aback when it arrived in a large branded Martini glass but the charm won me over as nostalgia hit me again. I quite fancy a prawn cocktail now actually.

Unfortunately, the mousse was more sticky ganache than airy delight, but the crushed biscuits beneath and fresh strawberries atop guaranteed a spoon-duel for the last mouthful.

I didn't expect to enjoy an early evening spent so close to Shudehill bus station as much as I did. The Northern Quarter may not exactly be a Neapolitan piazza, but the irrefutable feeling of family runs through the veins of Salvi’s food.

As we stood to leave, my friend pointed at a huge splodge of tomato sauce that I’d managed to dribble down my white shirt in haste.

I bet Nonna Teresa would know how to get that out. 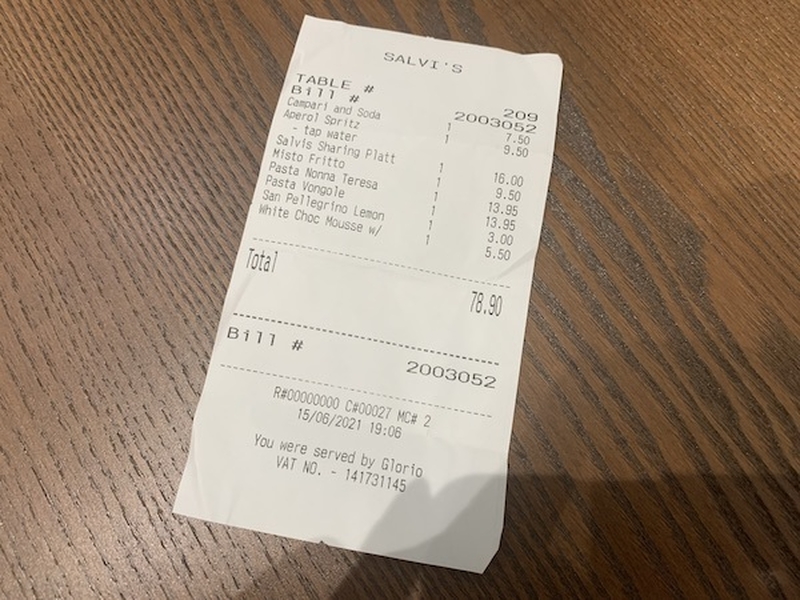