Landing on Jupiter – why Portland’s out of this world

WAS there ever a hotel as ace as the Ace? In my first 2017 visit to Portland, Oregon I revelled in its grungy quirks (even the vintage shower that didn’t work). With master mixologist Jeffrey Morgenthaler and definitive Stumptown Coffee on the premises and the legendary Powell’s City of Books two blocks away who could ask for a better base in this playful, radical city George Bush dubbed ‘Little Beirut’?

We just loved the timber-clad Doug Fir’s happy hour bar vibe, the raucous stand-up getting the party under way and then the fire pit bonhomie 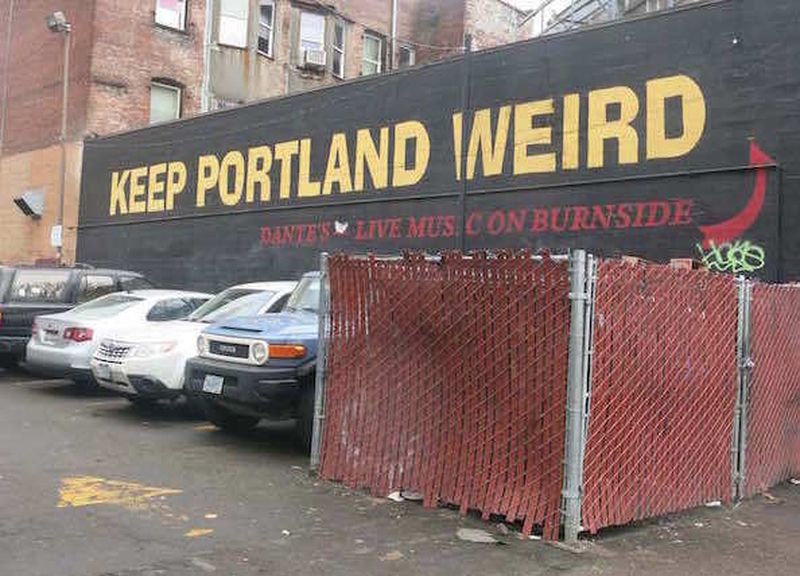 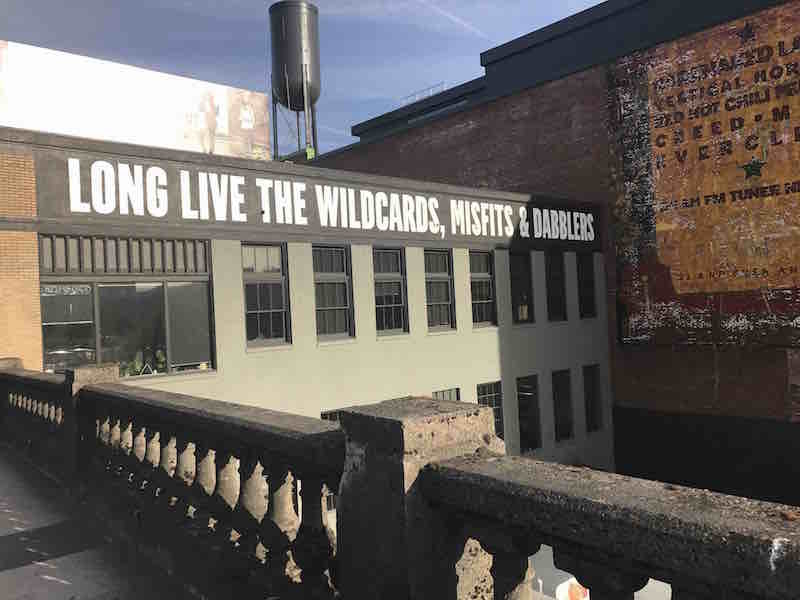 I swore this would always be my Portland lodging of choice. And the vow stuck – until six months later, stopping off on a San Francisco-Seattle road trip, I discovered Jupiter. Not via any space shuttle, simply by crossing the Burnside Bridge into a post-industrial quarter that’s on the up from a long way down. In this process the Jupiter Hotel and its in-house  live music venue, the Doug Fir Lounge, have been a major catalyst, along with Portland’s top restaurant Le Pigeon next door and Burnside Brewing Co across the road. Good things come in clusters. 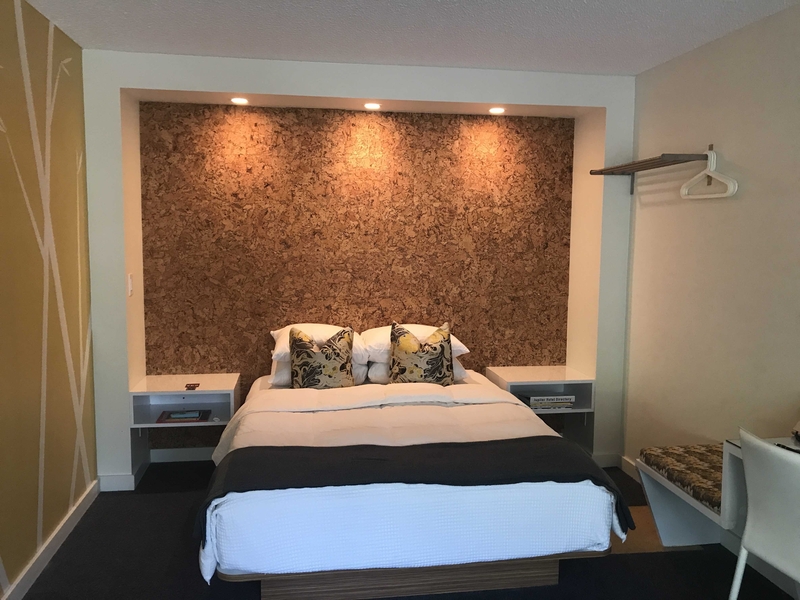 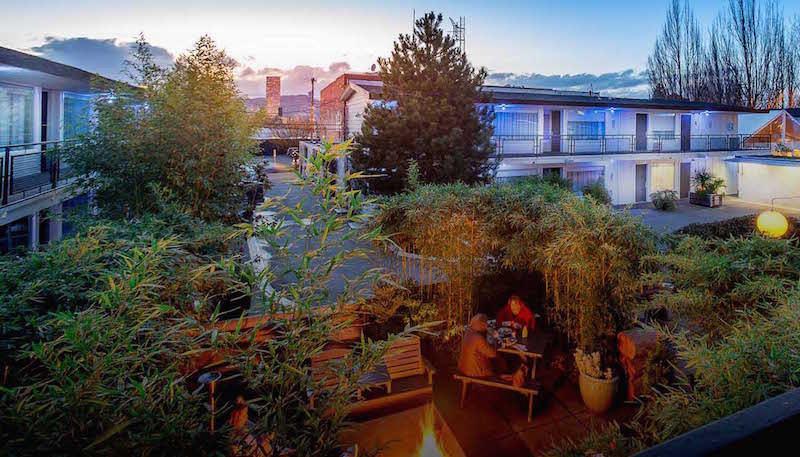 We had been asked when booking the Jupiter, a converted motel, whether we preferred a room on the Bar Side or the Chill Side; the former giving you an up-close share of party central until dawn, the latter offering a chance of some shut-eye. We chose Chill, taking advantage of an extremely comfortable bed in a compact but murally soothing environment.

Those aiming for an extreme chill might take advantage of the Jupiter’s 420 Dope Magazine Package. Starting from $199 plus tax, this provides you with “an insider’s look at Oregon’s legal cannabis industry” via a room, current issue of Dope Magazine and a kit that includes a vape pen, souvenir wear and discount coupons to local dispensaries but NO cannabis. 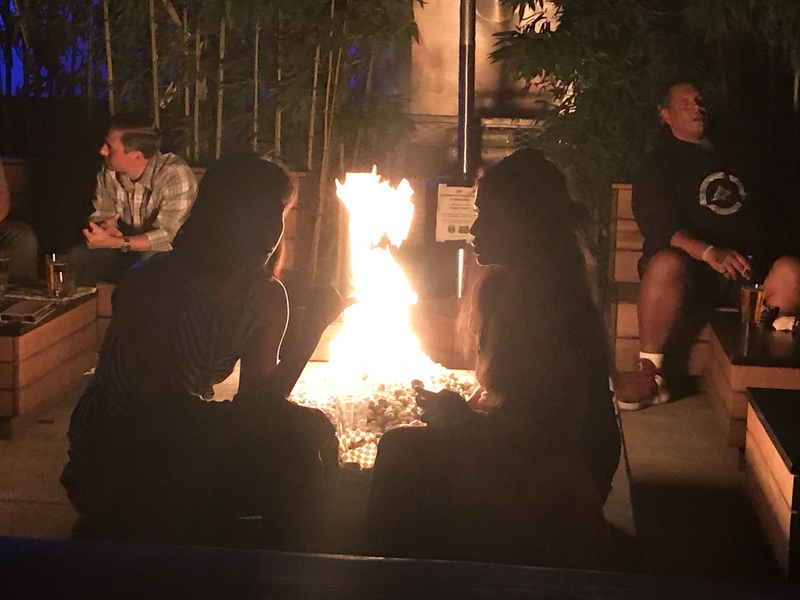 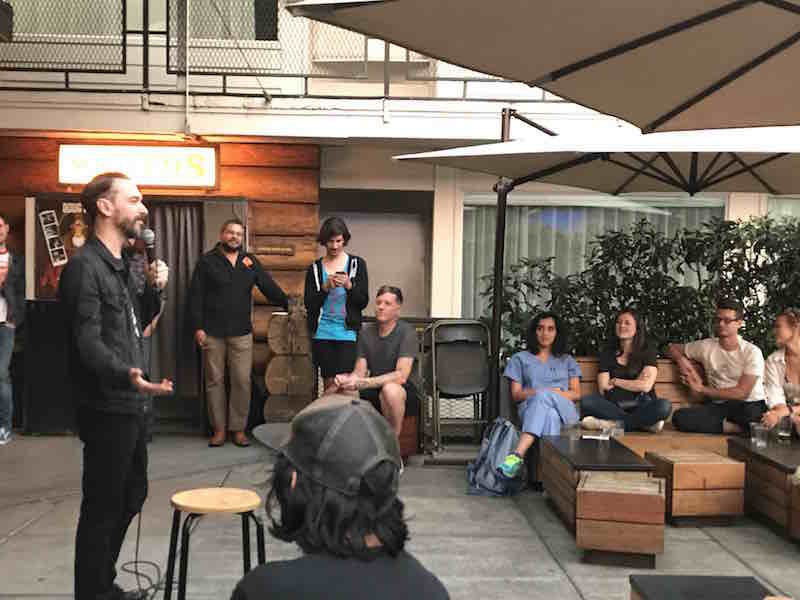 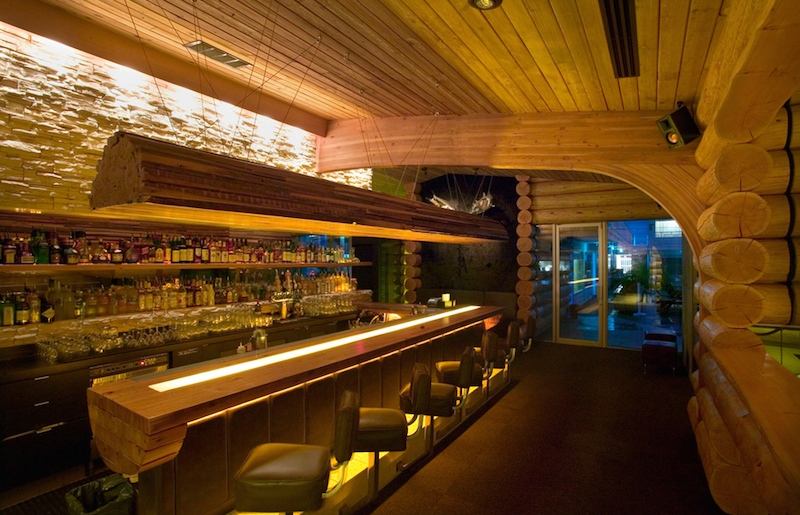 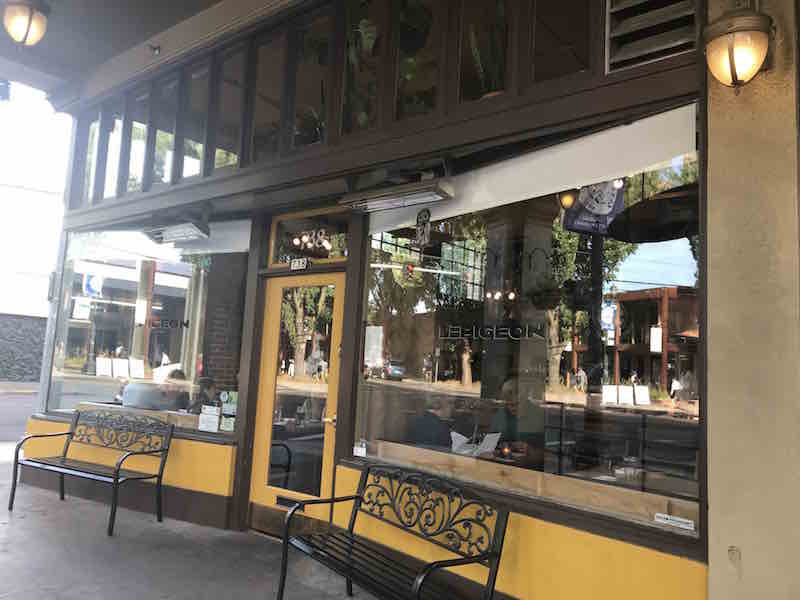 Host to many top acts, the Doug Fir Lounge has regularly been named one of America’s top gig venues – and there’s strong competition in Portland itself from the likes of Mississippi Studios and the Crystal Ballroom. Indeed the Jupiter’s leaflets claim 12 music venues within a mile radius (along with five distilleries within to miles and award-winning breweries within four blocks)

We just loved the timber-clad Doug Fir’s happy hour bar vibe, the raucous stand-up getting the party under way and then the fire pit bonhomie of the joint.

The beer was better, though, at Burnside Brewing and we couldn’t resist taking in Le Pigeon, 30 seconds round the corner. I’ve been cooking from restless pioneer Gabe Rucker’s cookbook for several years and the bistro didn’t disappoint with dishes such as caraway crusted sweetbreads; foie gras thom kha; and truffled chicken, shrimp and grits, corn succotash, prawn-tarragon aioli. Top end prices, especially for wine, belie the casualness of the setting and make it a special occasion place. As an alternative try chef Sarah Pliner’s small plate marvels at Aviary on hipster central N.E. Alberta Street up in the north east of the city. 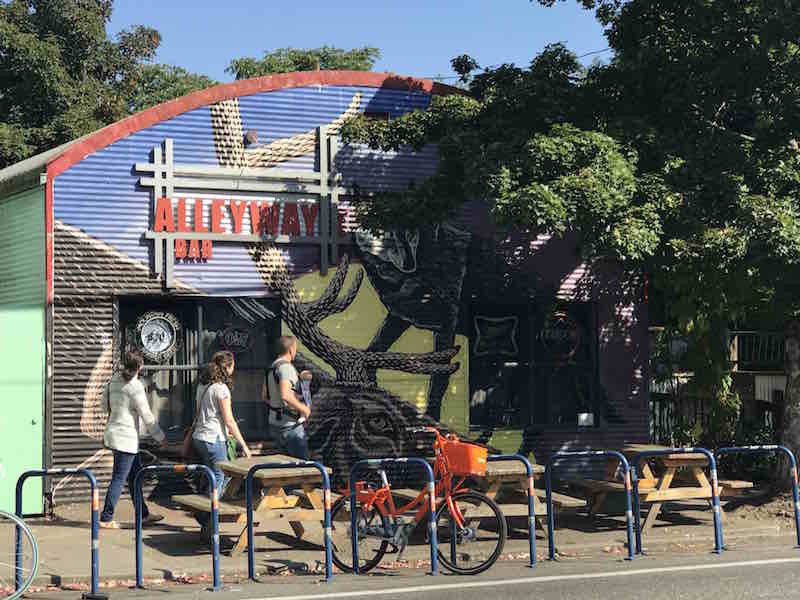 A more accessible and affordable bet for a Jupiter guest is three minutes’ walk away on S.E. Alkeny Street – a cafe outlet from street food champion Nong’s Khao Man Gai, whose original food cart is still serving its trademark poached chicken with rice downtown on the corner of SW 10th Avenue and SW Alder Street.

Street food ‘pods’ are similarly scattered around the city; a  top example is the Tidbit Food Farm and Garden at South East Place and Division Street, its global food carts circling the Scout Beer shack like covered wagons. For a full list of Portland’s food cart locations visit this link.

Sometimes you feel Portland invented coffee, too, it’s home to so many acclaimed roasteries. And with coffee, well, you’ve got to have a doughnut. Jupiter does a ‘The Magic is in the Hole’ certificate for guests, providing a ‘Voodoo Dozen’, a pink box of 13 from the city’s most hyped provider.

I prefer their rival Blue Star and I’m not alone. It was good to revisit their Valrhona Donut, a riot of intense chocolate, cream and brioche, at their Mississippi Avenue outlet en route for a Brewvana craft beer walking tour.

This vibrant corner of town, once a no-go area now on the cusp of gentrification, has lots to offer – the aforementioned Mississippi Studios, a street food pod (naturally), a cannabis store and the amazing Paxton Gate offering stuffed animal collectibles – but its breweries are worth the trip alone. Our ‘Brewvana Mississippin' tour guide April took us around three, Ecliptic, Stormbreaker and Hopworks Bike Bar and what our small party tasted along the way, especially at the latter, revealed why Portland contends with Denver for the title of US Capital of Beer. The three hour tour costs $69 and you do get to eat the pretzel necklace that brands you as an ale geek. 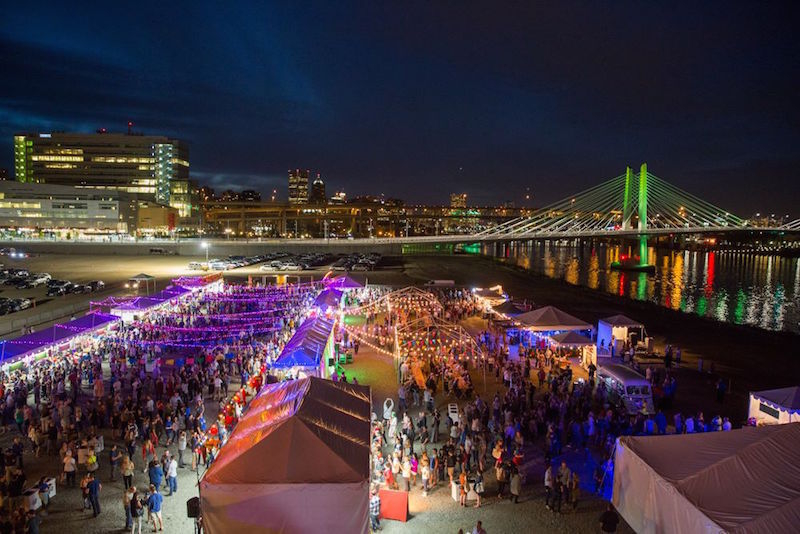 All the city’s food and drink fixations come together every September at Feast Portland, a four day gastravaganza. We were lucky enough to score entry to one of the festival’s most colourful events, the Night Market, encamped on brownfield Zidell Yards down by the Willamette River.

Latin-themed with a musical soundtrack to match, this attracted chefs from as far away as Brooklyn and Los Angeles, all serving signature small plates under the stars and fairy lights. Adding to the spectacular buzz was a view of the iconic ‘no cars’ Tilikum Crossing bridge and beyond, the downtown skyline. The 2018 Feast Portland is scheduled for September 13-16. Book early.

Five great escapes in the city and beyond… 1 The formal Japanese Garden in Washington Park now added an extra 3.4 acres to its original 5.5, featuring ornamental cherry trees, ponds and tea house. The revamped Cultural Village has an authentic style medieval castle wall, which was built with traditional hand tools under the watchful eye of a 15th-generation Japanese master stone mason. It’s a place of tranquil contemplation all year round but must be spectacular in blossom season. Nearby, for a different garden experience, don’t miss the fragrant International Rose Test Garden, celebrating 100 years of incubating new varieties (some 500 currently). 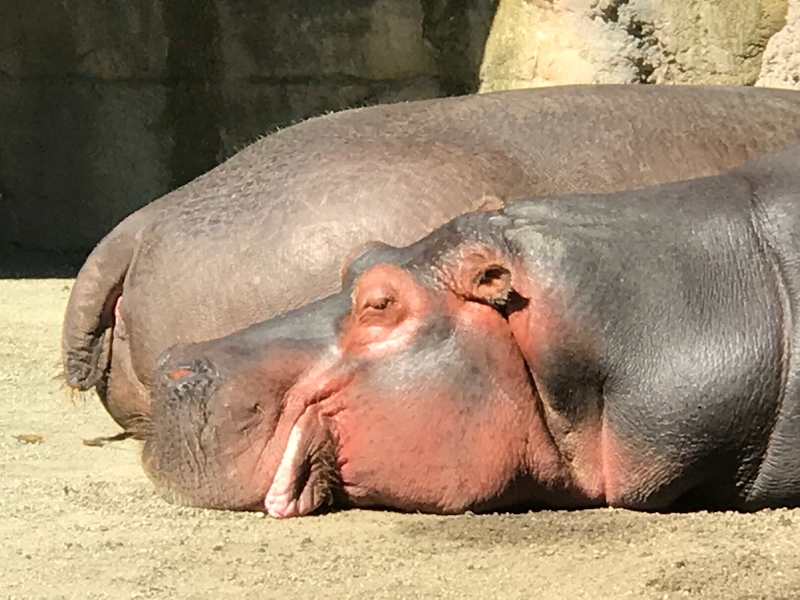 2  Also in Washington Park, and easily reached by the park shuttle bus and the MAX light rail back down into the city is Portland Zoo, a rambling and diverse 64 acre, family friendly operation that might convert a few zoo sceptics. I especially like its commitment to North American species. Thanks to its breeding programmed the once endangered Californian Condor now numbers 400 out in the wild. Fascinating face to face to see how huge they are. 3 Portland’s Chinatown, once dubbed ‘The Forbidden City of the West, is now much diminished. The opium dens, brothels and kidnappings via the ‘Shanghai tunnels’ to the riverside are now gone, but the area retains a certain seediness. All the more surprising to stumble upon the gorgeous Su Lan Chinese Garden, which occupies a whole city block on NW Everett Street. Modelled after Ming Dynasty gardens and built by Chinese artisans from twin city Suzhou, it offers a microcosm of Chinese culture. Taste the tea, feel the harmony. A Portland must. 4 Under an hour’s drive away is the Columbia River Gorge, where the river cuts a canyon through the Cascade Mountains, defining Oregon’s border with Washington State. It suffered from the wild fires that have scarred the West Coast these last few months, but nature heals fast, it’s a vast area and there’s an amazing range of activities from hiking, windsurfing and rafting to wine tasting. The township of Hood River, 60 miles east of Portland via the I84, makes the perfect base. 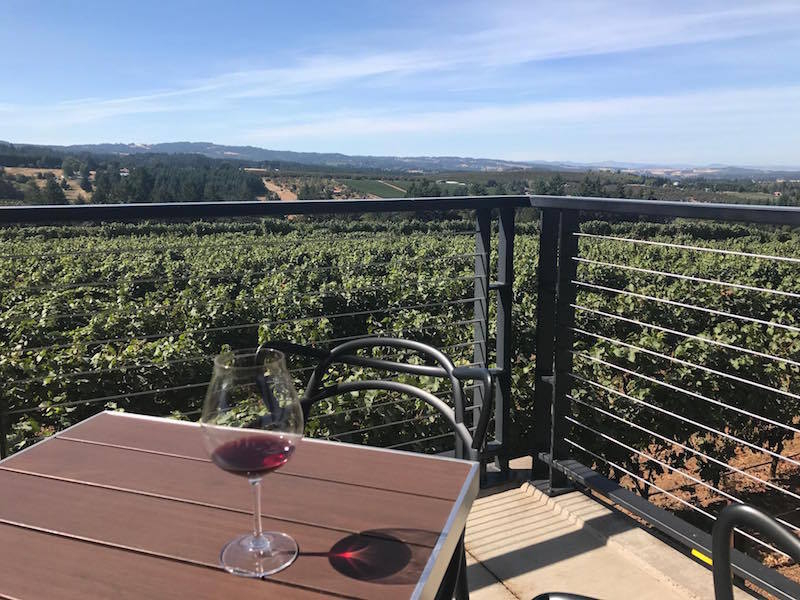 5 The Willamette is famous worldwide not for being Portland’s river but for being focus of the Oregon wine industry. The vineyards grow right up to the city limits, spawning a number of ‘urban wineries’, but for the real Willamette Valley tasting experience roam the hills around Newberg, Dundee and McMinnville 30 miles or so south of Portland. You’ll receive a warm welcome at any number of folksy family wineries. To plan an itinerary visit this link. We went upmarket to Ponzi, one of the pioneering wineries created by ‘escapees’ priced out of California and seeking a fresh terroir for the Holy Grail grape, Pinot Noir. That was 45 years ago and nowadays the luxurious tasting room and terrace overlooking the Chehalem Hills vineyards feels not a million miles from Napa. Accordingly, a single flight featuring a selection of current vintages costs $20 with cheese and charcuterie plates from $12. Worth splashing out for wine and setting.

On our West Coast Road trip the first Oregon port of call was beautiful Bend, the perfect aperitif for big brother Portland. Read about it here. 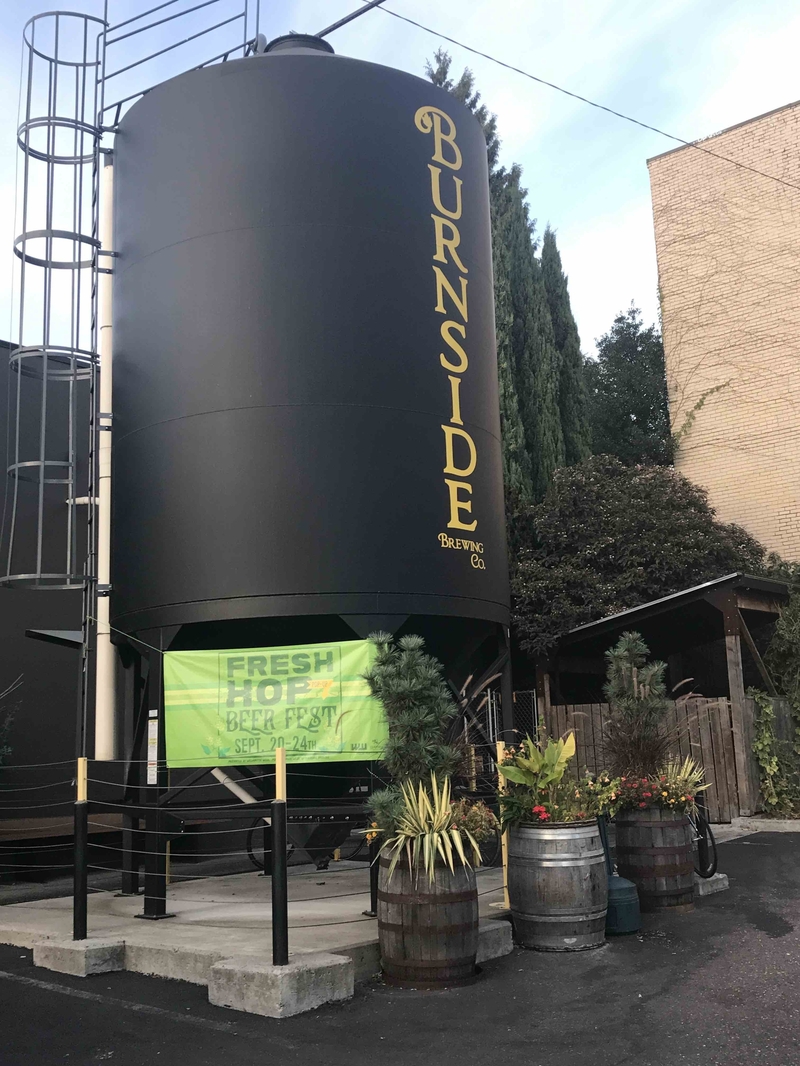 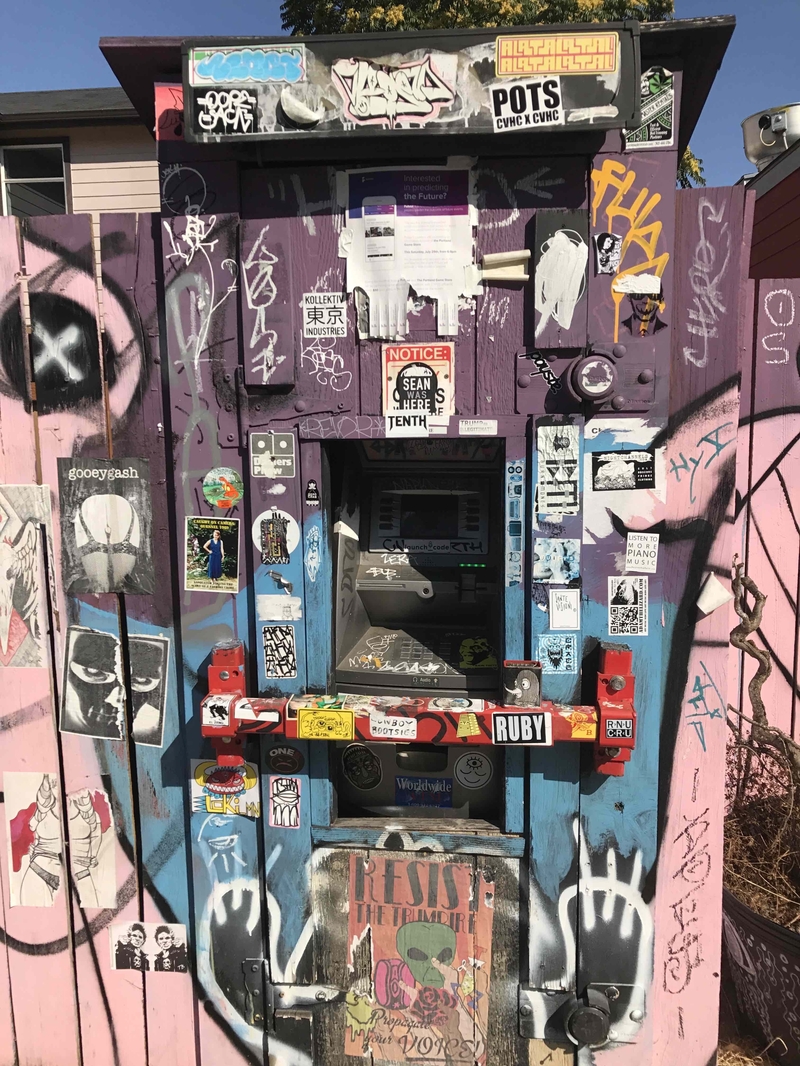 Neil Sowerby stayed at The Jupiter Hotel, 800 East Burnside Street, Portland, OR 97214. Rooms from $134. From June 2018 the hotel is opening an extension across the road, described as “a sophisticated and elevated expansion… allowing you to retire to a softer more luxurious guest room at the end of your day.”

At the end of our West Coast road trip we flew back to from Seattle to Manchester via London Heathrow with British Airways.

An essential guide to the area is Travel Portland. For further afield in the state go to Visit Oregon.

To plan your American trip of a lifetime go to Visit USA.