La Boca – back street bocadillos, boquerones and bellotas in the NQ

Let’s be honest, ‘new tapas bar opens in Manchester’ is a headline that’s been so overused over the last few years, you’d be forgiven for stifling a yawn and scrolling past. But that would be foolish because La Boca, Turner Street’s new charcuteria and bar, might be the closest thing we have to the bars of back street Barcelona or the avenues of Alicante.

Thanks to the relentless rise of small plate menus, we finally seem to have grasped the concept of informal boozy snacking. Expectations have changed on both sides of the kitchen pass and customers now feel more at ease bobbing in and out of bars like the Spanish do for a beer and a bocadillo here, followed by a chat over some chorizo there.

Hispanophiles Donna Robinson and James Ferdinales quietly opened the doors of La Boca on January 2nd and have already attracted the attention of local food and drink enthusiasts. We even spied the chef patron of one of Manchester’s most acclaimed Spanish restaurants bobbing in for a glass and a graze during his rare down time.

There’s something about Spain that gets under people’s skin – you only need to talk to the likes of Joe Botham from Levanter/Baratxuri, Simon Shaw from El Gato Negro, or Peter Kinsella from Lunya to see that. La Boca is casual, unpretentious and ingredients-led. It’s been a labour of love for Donna, who converted the little Turner Street unit from a warehouse full of anoraks to a contemporary tapas bar.

“The idea’s been in my head for a long time,” she told us, “and it’s taken a long time sourcing hand made tiles from Andalucía, worktops from a salvage yard in Shropshire, reclaimed radiators, mirrors, coats hooks and artwork (by Emma Evans).”

Donna has a history of taking chances. She opened MaltDog Beer Shop and Ale House in Monton village in 2013 when all there was in the area was a Holt’s pub - people told her she was mad.

“I was one of those independent kids who threw myself in the pool and learned to swim,” she said. “It is a bit scary having your own business though, it’s like having a 21st birthday party and worrying in case people don’t show up. But you have to get over that and when people come through the door and you can see them chatting, it’s so rewarding.”

Are they concerned that there are too many Spanish places in Manchester? “No", says Donna, "I think most are restaurants where you book, but we wanted to be a place where you can drop in and hang out on your own, the same way you would in a local pub, but mixing in great produce.”

So is La Boca mainly a bar? “There’s also a deli element - but you wouldn’t know about it at the moment,” admits Donna. “Because we don’t have the footfall I decided on a display counter. So now Manchester has its own back street charcuteria next to the Buddhist Centre with Iberico bellota Jamon on the counter for hand carving.

“Customers are free to come in and ask and we’ll package it all up. If you ordered the sharing platter which is too big for one (Jamon serrano Iberico Gran Reserva, salchichon Iberico de cebo, chorizo Iberico de Bellota y cabecero de lomo, award winning semi cured manchego & queso de Mahon, Cortijo marinated olives, pepinillos, organic membrillo and picos bread sticks - £19.50), we can vacuum package the rest of it for you to take home. If you live round here and are having a few people round, you can pop in and pick up cheese, olives and really good quality charcuterie.”

“We are a charcuteria selling tapas from typical areas such as Asturias and Andalucia with a small portion of typical rustic slow cooked dishes over the winter months,” explains Donna. “I was inspired by the slow food movement to get really good quality produce. For the past two years we’ve been trying produce and talking to suppliers, hearing their stories and learning about particular ingredients and how best to use them."

What can we wash it down with? “We have Alhambra on tap. It’s a refreshingly crisp lager that works really well with the saltiness of the ham. We also offer local craft beers. A saison from Blackjack has a slight sourness to it because they use a slightly funky Belgian yeast strain that works well with cured meat. Sours and cider can work well with more acidic dishes, so we have a plum sour from Pomona – but this will change seasonally. We also have a pale ale from Shindigger made with mango. I think cheese works better with beer than with wine actually.”

Wine? Tell us more. “We’ve kept it simple with have four decent reds and four decent whites” - all have been chosen to be easy drinking accessible and go with food. “We’ve also got really good Cava and a small selection of sherry which is especially great for drinking in winter.”

“What we really love about Spain is not just the ingredients, it’s the way that the Spanish eat’” concludes Donna. “It’s a very social thing and they very rarely have a drink without eating something.”

We can definitely see that catching on. 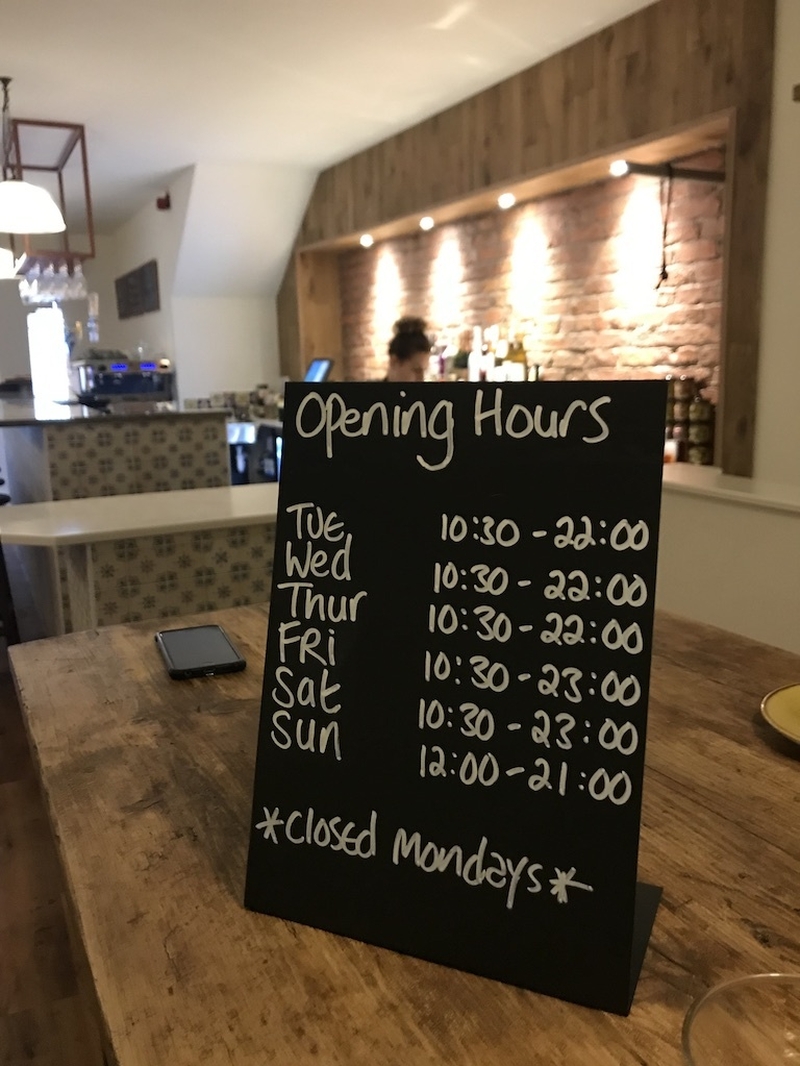