WHERE else would you take a woman famed for wearing raw-meat dresses and spending 72 hours hibernating in a giant egg when visiting Manchester? Lady Gaga (who else?) reportedly spent £8000 when she visited Afflecks back in 2014. The entertainer left wearing a lace Victorian corseted dress complete with leather straps, a bowl cut black wig and shakily-drawn-on kohl eyebrows.

True to form, within five minutes I'd eyeballed a quartz crystal penis and declined a marriage proposal from a bloke with face tattoos

Afflecks is one of few spaces in Manchester where weirdness, or more politely ‘uniqueness’, is actively nurtured and celebrated. In its two decades campaigning for anything but normality,  the four-storey independent emporium has allowed the anti-establishment and eccentric to roam free and sell the type of idiosyncratic wares you’re only likely to find on the bottom shelves of Google.

You see, Afflecks dances to its own beat, and we wouldn’t have it any other way.

The start of 2016 marked the first year since 1982 that the alternative market has ever been completely full, with 70 traders alongside a theatre, a photography studio, a barber, a baker and two cafés, Ginger’s Comfort Emporium and Blackmilk.

With always more to discover, we paid this Manchester institution a revisit. True to form, within five minutes I'd eyeballed a quartz crystal penis and declined a marriage proposal from a bloke with face tattoos. "You mad-head," he cackled.

So is Afflecks really as weird as people think? Well, yeah... here's what we found:

The urge has never struck me before now, but suddenly I feel in desperate need of a Storm Trooper helmet. You know, just in case I meet John Boyega and want to re-enact a scene from The Force Awakens. Up on the third floor, the Star Wars Man stall has four Storm Trooper masks and tens of thousands more Star Wars, Marvel and WWII action figurines. The man behind Star Wars Man, Marcus Cox, tells me he left his uninspiring job in a supermarket to peddle his collector’s figurines after realising he could make more profit. “I just thought I can’t be doing this for much longer. I started selling on eBay and began making more doing that than working at the supermarket. Getting a stall made sense.” It’s all very Big Bang Theory here. 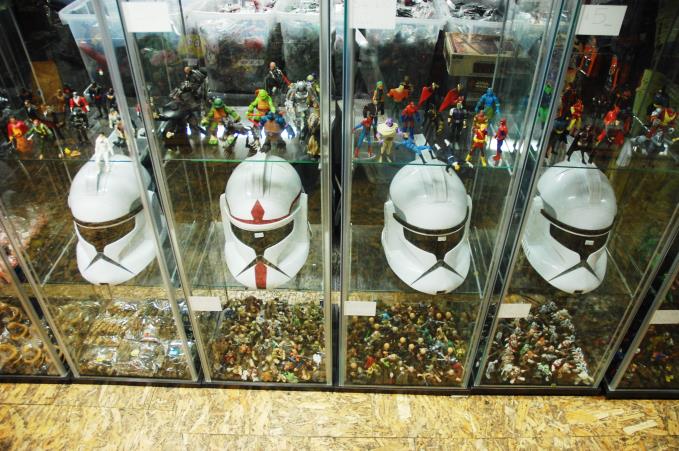 “You look curious. I think you should come inside,” says writer and performance poet Joy France with a beaming smile. I'd been stood outside her ‘Creative Space’ pondering what reasonable explanation there’d be for a giant teddy to be holding a sign that reads, “Hi, I’m a dyslexic bear.” I’d learn there’s no real reason for anything here but self-expression. France sits in her ‘PIMP MY ROCKER’ in a graffitied room filled with funny, miscellaneous tatt - including disco lights that she turns on occasionally. “I don’t sell anything,” she explains, “I’m Afflecks' Creative In Residence. People come here to express themselves. You can write on the walls, play music, donate things – absolutely anything... and you’d be surprised what people feel comfortable to share, and how it brings about an emotional release for many. One of the stalls donated these cardboard boobs, so we covered them in henna art. When I arrived the space was completely bare, including my rocking chair and now look at it.”

France explains that she’s a spoken word artist who was playfully dubbed the ‘rapping granny’ after she won a few poetry slams, the oldest person to do so. She gets up and performs one of her pieces with gusto, verve and more rhythmic swagger than any American rap star (she wouldn’t like to make that comparison, mind you). “I’ve just got back from performing at the Isle Of Wight festival,” she tells me, “I can’t stop bragging about it.” Afflecks has a serious sweet tooth and could probably rival Willy Wonka's on the eccentricity scale. Take Ginger’s Comfort Emporium, where they’re serving ice creams that could cause tooth decay with just one look, while Blackmilk, the resident cereal café, serves up high-sugar count cereals within Easter egg halves. The most recent addition to Afflecks’ sugary line-up is Fudge Ape, selling up to 70 barmy flavours of unconventional fudge. These aren’t your traditional, Grandma-approved buttery fudge slices. Instead flavours span Jagerbomb, Lager, Irn Bru, Baileys, peach schnapps and much more. Owner of Fudge Ape and neighbouring sweet shop Chocolate Ape, Rachel Heraghty, sources her fudge from Rossendale. You can buy them at £1.75 per 100g. 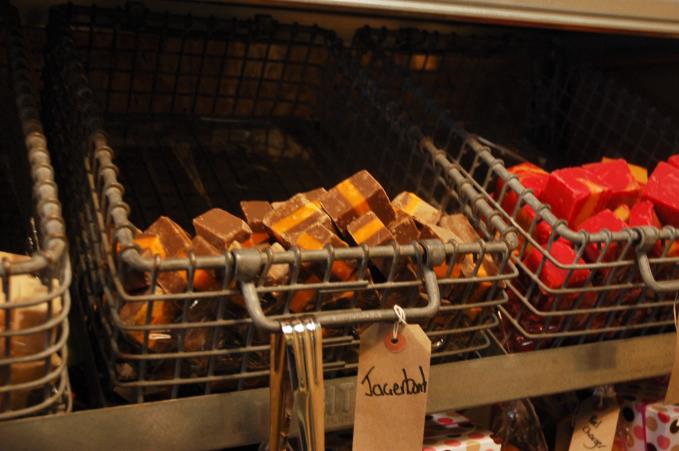 “People aren’t weird anymore,” says Roxy, owner of dress boutique Strawberri Peach. “I used to be a dancer and once cut up CDs and stuck them onto a bra so they’d reflect the disco lights.” You might recognise Strawberri Peach’s designs from Channel 4’s Big Fat Gypsy Wedding, where the young ladies of Irish Travelling families would rock skimpy, bedazzled tutus and corseted tube tops to Catholic wedding receptions. So do all the dresses come with sparkles? “We custom make prom dresses, clothes for dance recitals, Victorian gothic costumes; I’ve made costumes for Strictly Come Dancing, Britain’s Got Talent contestants and of course, Lady Gaga came in and purchased some outfits,” says Roxy. “Prices can start from £70 and go up to a few hundred – it all depends on how imaginative you want to go.” 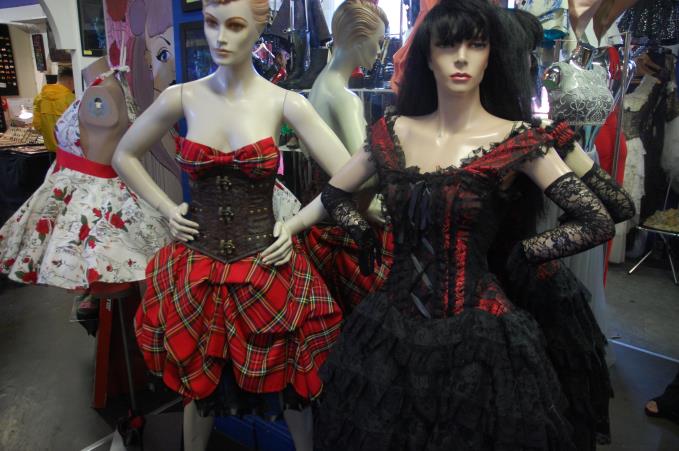 Are you a master of disguise, entertaining an alter-ego, a multiple personality disorder, or debating a bold style move? All the above is catered for at American Graffiti. The vintage boutique caters for all your kitsch needs, from 1940s clobber to trippy hippies. Go for a pink wig and do your best Nicki Minaj.

Downstairs at Afflecks, next to the neon rave party shop, is the 3MT theatre; a small venue designed for indie, avant-garde sketches as well as poetry slams and open mic nights – there’s also a resident pet lizard. Owners and retired thespians John Topliff and Gina T. Frost are proud of their small theatre, which they claim to have cobbled together with recycled bits-and-bobs found in miscellaneous skips. With their theatre group The Manchester Shakespeare Company, they perform and write their own plays (because it would cost too much to hire other playwrights) and explore intriguing themes such as ‘Will and Anne – what if Shakespeare was alive in the 1980s?’ “We don’t care about your race, religion, class or sexuality here. This is for everyone,” says John. "And we have some real talent on the stage. Plus we cover risky topics, some risky gags – you know, stuff the Art Council wouldn’t touch.”

Easily the best thing about Afflecks is its seemingly endless collection of curious finds and miscellaneous nonsense. Discoveries of note include Trippy Kitty’s lego figurines, a pair of flamingo shoes, hand-wired jewellery and a very honest prayer message...