"There is a culture of fear" - Is Castlefield really under attack?

“I definitely feel more cautious now,” says Rafia Javaid, a young woman who lives close to Ellesmere Street. She’s talking about the effect the recent Manchester Evening News story (Crime has got so bad in Castlefield that some residents are too frightened to leave their flats, 20 January) had upon her. The piece talked about ‘the current crimewave’ in Castlefield with people afraid to leave their properties.

The story mentioned there had been eighteen muggings in three months in the loosely titled Castlefield area. People were jittery and this led to a public meeting attended by 120 people on Monday 22 January convened by Castlefield Forum, the city centre’s most dynamic residents and small businesses group.

There is a culture of fear especially in the social media groups. It’s almost false reporting

At the meeting, GMP’s Chief Inspector Cherie Buttle said there had been nine reported muggings, an average of three a month, not eighteen. Indeed there were some months in which there had been no muggings. Apparently Castlefield crime amounts to 3% of the total city centre figure.

So has Rafia Javaid, changed her lifestyle because of the reported ‘spike’. “I’m more conscious of keeping my phone out of sight after the story and more aware of things around me,” she says.

But has anything untoward ever happened to her or her acquaintances in the area?

“No, nothing fortunately,” she says. “I’ve not seen anything either, but the stories make you a bit afraid. I like living here though.” Essentially the same answer was repeated by the next five people we stopped on Ellesmere Street. None of them had, touch wood, suffered any mugging and while the MEN story had made them more cautious, they weren’t thinking of leaving or changing their lifestyle.

Back in 1972 a sociologist called Stanley Cohen wrote about his theory of folk devils and moral panics. In this scenario young males on bikes, or in balaclavas, associated with the Castlefield incidents are the ‘folk devils’. These folk devils then become the ‘subject of loosely organised but pervasive campaigns through gossip and the spreading of urban legends’ rather than hard facts. This is the ‘moral panic’. The mass media then report on the gossip as much as the hard facts and to get the story read or heard, sensationalise the effects and quantity of the ‘outrages’ either through the headline or the main copy. This reinforces and grows the story. This can lead to action by the authorities and, for example, in Castlefield’s case, an exponential growth in fear and trepidation.

That was 1972, in 2019, with the magnified effect of unmoderated social media, this process can literally take minutes to manifest. 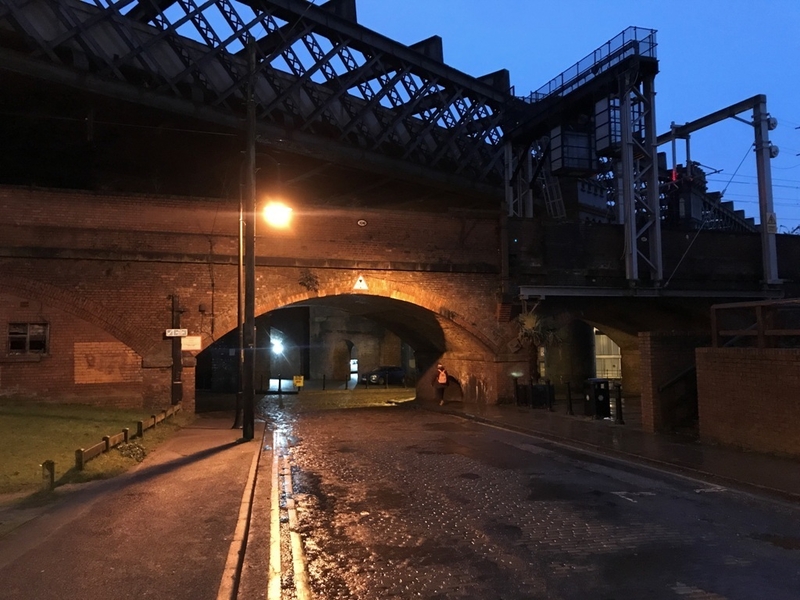 Castlefield Forum is also worried about the effects of the MEN story and of social media exaggeration. This is their statement to Confidential.

‘Whilst Castlefield Forum shares our community’s concern about crimes such as ‘robbery from person’ in the wider Castlefield area, we are confident that GMP are taking this matter very seriously. The police have been working with us, our Ward Councillors and colleagues from Britannia Basin Community Forum to listen to our concerns and share accurate data on types, numbers and locations of incidents. We have seen increased patrols in the area and are also aware of plain clothes officers patrolling Castlefield.

‘Together with Ward Councillors we are identifying locations with insufficient lighting and working to improve those areas with the Council and relevant private landowners. We continue to encourage residents to ensure that every incident is reported to GMP and to share intelligence on suspects when this is available as these reports will be used by GMP when allocating resource.

‘We recognise that social media can be extremely useful in sharing information but that it can also lead to some misreporting or duplication which may cause unnecessary concern. We strongly disagree with recent headlines in the press suggesting that residents are afraid to leave their homes is a true representation of the vast majority of our residents.’

Mike Halkon, the boss of the popular and excellent bar, The Banyan Tree, on Ellesmere Street, acknowledges that the perceived crime wave has been a hot topic in the bar.

Yet he also says: “There is a culture of fear especially in the social media groups. It’s almost false reporting, innocently done of course, and probably with the best of intentions, but it doesn’t help. I remember people talking about something like sixteen or eighteen muggings when they were all talking about the same one. It’s a shame the police, who use social media a lot themselves, don’t have someone periodically going on to the most used forums and giving a more accurate account.”

Halkon has had first hand and recent knowledge of crime in the area. He witnessed a raid on the nearby McColl’s shop in which youths, one with a balaclava, robbed various items. The police didn’t attend. This lack of response is disturbingly frequent across Great Britain at present – as we reported here.

Chief Inspector Cherie Buttle, at the public meeting, emphasised the fall in GMP police numbers from more than 8,000 to 6,000 and how stretched the police were. This repeated mantra is becoming tiresome for many citizens. As MP Graham Stringer said in that previous article: “If there is crime being committed they should attend to it. It seems that some police chiefs are playing politics and attempting to put pressure on the government rather than doing their job.”

Policing aside, Castlefield demographically displays certain characteristics that might help underscore the recent stories. It has a fairly well-to-do set of residents, often younger, with lots of nice gadgets and gizmos, many of whom might be experiencing city living for the first time. What has become part of urban life across UK cities might seem strange and threatening. Older, and more long-term residents, may be less susceptible to shock stories.

Newspapers must do their job in reporting the rough and the smooth. Unfortunately, in today’s tough media climate, sensationalism is the tried and tested route to exposure and thus advertising revenues. Yet sometimes telling the story without frightening people should be the responsible approach, and to be fair, mostly the MEN story does that. However, its headline and much of the content also seeds the moral panic of the area.

None of these observations are intended to underplay people’s worries, especially of those who have been mugged, and this was evident at the public meeting. But a cold-eyed look is also useful.

Statistically, it’s just not true that walking the Castlefield streets is a dangerous activity. In truth it remains a safe part of the city, a great place to live and a very attractive one too.